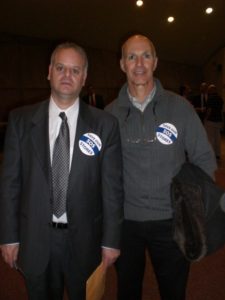 If you believe that wine belongs in liquor stores, and not stacked between the produce and the cracker aisles, then Albany was the place to be in NY on February 24th when over 800 store owners and industry amassed at The Egg Center for Performing Arts (www.theegg.org) and lobbied state representatives against the pending bill to allow wine sales in New York supermarkets.  It was inspiring to see all store owners united on deck and making the rounds in small groups to lobby their respective local representatives. It’s all about their votes, after all.

Upstate supermarket powerhouse Wegman’s appeared to be the only party on site in favor of the bill.   Some hissing ensued.

No hissing was directed at the Beam Global team members who were out in full force admirably and led the supplier charge in support of the stores. Nor was there anything but appreciation for LIC based Phoenix/Beehive Distributor leaders who were savvy to organize paid bus transportation for all attendees leaving their HQ at 5am that morning and SWS who also offered bus transportation leaving various locations for a $30 fee.

The rallying cry mirrored the buttons which read: “SOS or Save our Stores.”  The collective air of fear is that passage of the bill will force over half of the 2,750 retail stores to close and that short term licensing revenue gains will be trumped by long term job losses.  By February 26th, Gov. Paterson’s political will had eroded further as he announced withdrawal from the Governor’s race.  Stay tuned…Some Vegas oddsmakers already have Paterson resigning in the coming weeks.  (Or should I say Aqueduct oddsmakers?)

These are times to bind with your top accounts on this issue and weather the storm together.  Another Lobby Day is planned for immediately before the legislative vote this spring.

I recommend you attend with us again.  Join the fight.  For more information on future rallies and recent activity-www.lastmainstreetstore.com