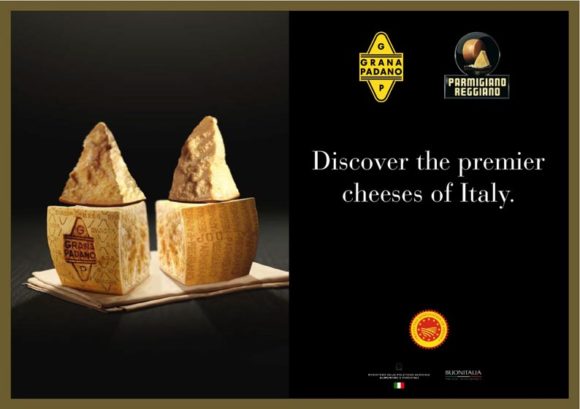 Since 1968 Madison Square Garden has been an iconic arena for basketball, hockey, rock concerts, and boxing.

On the night of March 23rd two unusual opponents squared off in the ring – Italian cheeses. In the blue corner, from Emilia Romagna, Italy was Parmigiano-Reggiano, seen as the undisputed champ. In the red corner, from Valle Padano in Northern Italy was Grana Padano, also known as the challenger.

At this event held in the luxury boxes of The Garden during the Knicks/Nuggets game, these two ex-rivals were not here to compete against each other, but rather to join together in their first ever historic partnership. On this evening BuonItaliaSpA, the Rome based governmental agency that is responsible for promoting internationalizing and safeguarding Italian agricultural products, structured a partnership with the two cheeses and centered it around the New York Knicks.

You may ask “What does a New York basketball team and two of the world’s best and oldest semi-fat hard cheeses have in common?” Well other than Italian Danilo Galinari who plays for the Knicks, nothing! But the idea of the partnership is to drive selected Italian products to an American market through quality food retailers. With the help of the Protected Designation of Origin (PDO) and the Protected Geographical Indication (PGI) BuonItaliaSpA is planning to educate an estimated 30 million foodies in this country about genuine Italian food products. 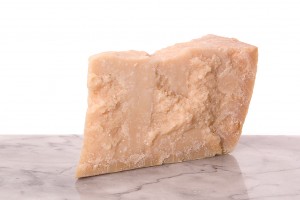 The products highlighted this night, Parmigiano-Reggiano and Grana Padano, were together under one roof yet each presented in their own box to highlight their individual qualities. In the much more crowded and lively Parmigiano room were delectable creations from Chef Cesare Casella; creator of such restaurants as Beppe and, more recently, Salumeria Rossi. Casella was toasting and entertaining a raucous, yet sophisticated crowd of food aficionados with waving hand motions and welcoming smiles, classic traits of the chefs. He had prepared a menu of Italian Bean Salad, Farroto and Lasagne Emiliane all featuring of course, Parmigiano-Reggiano cheese.

In the room dedicated to Grana Padano, the cheese from northern Italy had its due under the hands of Chef Fortunato Nicotra of Felidia. People here were quietly lounging and enjoying Nicotra’s wonderful Grana Padano laden specialties, such as a Crispy Frico with an Apple/Celery Salad, Raviolini in Grana Padano Broth and Braised Flat-Iron Beef with Grana Padano Fonduta. 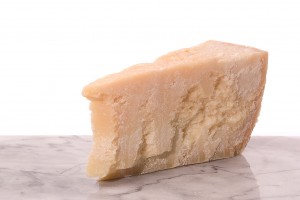 A staunch Grana Padano supporter Nicotra notes, “That although they are two great products, and very similar, for the price of the best Grana Padano, you’ll get the worse Parmigiano Reggiano.”

Could both these cheeses be on the table of every American someday? Like ketchup? Nancy Radke, Director of the Consorzio Del Formaggio comments, “As Americans get more sophisticated they’re beginning to realize that there’s a place at their table for both cheeses, and that the uses for both cheese can be very distinct, sort of like the sophistication we’ve gained for olive oils. She adds, “There is room in America for both cheeses to integrate into an already large cheese market.”