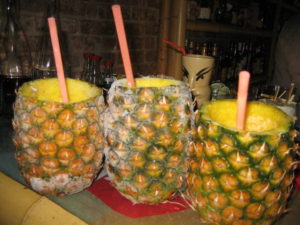 In 1926, there is mention of a cocktail called the “Pineapple Crush” in “Terry’s Guide to Cuba” by T.P. Terry:

“PINEAPPLE CRUSH made by squeezing the juice from half a Piña into an ice-filled shaker and sweetened with a little sugar.”

Once again, for reasons previously stated with regard to the aforementioned 1910 Piña Fria and the 1922 “Piña Colada”, this is not even close to resembling both the flavor and the vehicle of presentation of the modern Piña Colada. We push forward to 1937 where we finally see the addition of coconut to a pineapple, and sugar concoction. The Middletown Times Herald reports: “They also sold a cocoanut[sic] and pineapple mixture called Piñacolada[sic]

The omission of rum is obvious. Was this a cocktail most likely prepared with rum? We would argue in the affirmative given the fact that a drink by the same name and country of origin had been in existence since 1922 with rum as its base spirit. All you have to do is add “coconut” to the 1922 incarnation and you have a drink that is not altogether dissimilar from our modern Piña Colada.

THE BIRTHPLACE OF REFRESHMENT AND WHO DO WE HAVE TO THANK?

So there we have it. Incontrovertible evidence that the Piña Colada was invented in Cuba? Maybe not. Let’s return to Puerto Rico. There are alternating stories on who invented the Piña Colada here. We begin with what we like to call “The Story of the Ramons”. These Ramons are not to be confused with the New York City punk rock band with whom their name is synonymous, but their contribution to society is worthy nonetheless.

There is a story that dates back to August 15, 1954 when a man named Ramon “Monchito” Marrero claimed to have introduced the Piña Colada at the Caribe Hilton’s Beachcomber Bar in Puerto Rico. The Caribe Hilton was and still is recognized as one of the island’s most famous and luxurious resorts. Located in the capital city of San Juan, Beachcomber’s was the place to be in its heyday. Monchito claims to have worked tirelessly for three months in an attempt to perfect his Piña Colada. To this day, there is a plaque hanging on the wall that states that the Caribe Hilton is the true birthplace of the frozen classic. Regardless of whomever invented the Piña Colada, few can argue that Donn Beach is responsible for popularizing it. A perusal of various Beachcomber’s menus from the era clearly indicate that Beachcomber’s franchises around the world started making this drink in 1954. The Piña Colada would heretofore be adopted into the Tiki fold, where it would remain forevermore a tropical vice for the masses.

Yet another bartender by the name of Ramon (Portas Mingot, from Buenos Aires) was instrumental in recording his efforts behind the bar for posterity. This “Don Ramon” mixed pineapple juice, coconut cream, condensed milk and ice in a blender, creating a similar recipe to the Piña Colada that we follow today. At Barrachina in San Juan, the restaurant where he plied his trade, a plaque commemorates the occasion:

“The House where in 1963 the Piña Colada was created by Don Ramon Portas Mingot.”

A trip to Barrachina today will reveal a delicious tasting but less than impressive display of frozen cocktail service. Sadly, we went there eager to sample the Piña Colada of the infamous Ramon #2–only to see our bartender pour approximately 45 ml of rum into a glass and top it off with a frozen Piña Colada mix.

There is a third story about a bartender named Ricardo Garcia who is also said to have invented the Piña Colada at the Caribe Hilton in 1954. However, his name isn’t “Ramon”, and we want to continue on this tangent until we arrive at the story of the most important “Ramon” of them all. Ramon Lopez Irrizary.

He was born in Puerto Rico and was a recognized professor of agricultural sciences. In 1949 he was given a grant to assist in industrial development on the island. Dr. Lopez discovered an easier, commercially viable way of extracting the “cream” from coconuts (a process which if done manually is both labor intensive and costly). Patented in 1954, his product was introduced to the world as Coco Lopez.

Piña Colada recipes printed prior to 1954 that mention coconut are not specific as to what “kind” of coconut. Why is this important? We contend that there are two versions of this drink; Cuban AND Puerto Rican. We have at our disposal today several coconut-derived products that were not readily available to bartenders in the early half of the 20th century.

Coconut water, coconut milk, coconut cream, and cream of coconut are all vastly different from each other. Coconut water is obtained by boring a hole into a raw coconut and extracting the liquid therein. It is light, clear, and refreshing. It requires no labor aside from opening the coconut. Coconut milk and coconut cream require a more intensive method of preparation.

Coconut milk is made by simmering shredded coconut with water or milk until it develops a frothy texture. This liquid is then strained through cheesecloth. When the milk is cooled off and allowed to set, coconut cream (a much richer and mildly sweeter product with a more syrup-like consistency) rises to the top and must be skimmed off in order to extract it. Cream of coconut is simply coconut cream that has been subsequently sweetened. The difference in these coconut products with respect to preparation, viscosity, sweetness, and flavor are quite apparent. A sampling of each will clearly illustrate their differences.

Given that cream of coconut wasn’t commercially available until 1954, we believe that all Cuban-style Piña Coladas at this time called for either coconut water or coconut milk as their coconut component. Based on the historical records gathered throughout the Caribbean with respect to the advent of the Piña Colada, it is very unlikely that someone living on the island of Cuba invented cream of coconut for use in cocktails, or otherwise. An ingredient so unique and vital to the success of the Piña Colada would certainly have been documented had it been a part of their culinary culture prior to 1954.

The Cubans had an established bartender guild, the Club de Cantineros, which printed cocktail recipes books as far back as 1924–and possibly earlier. Historically, we have recognized that there was and still are Cuban bartenders with a fastidious and meticulous acumen for making cocktails. Despite our efforts to comb the records for evidence that supports the argument for a Cuban birth of the Piña Colada, we cannot find a printed recipe hailing from the island of Cuba named Piña Colada that contains rum, pineapple and coconut.

Next, Part Three. Where you learn how to make your own perfect Piña Colada. http://insidefandb.com/2010/06/if-you-like-pina-coladas-the-end/

TODAY’S MESSAGE IN A BOTTLE: “DON’T HATE US BECAUSE WE’RE BEAUTIFUL!”