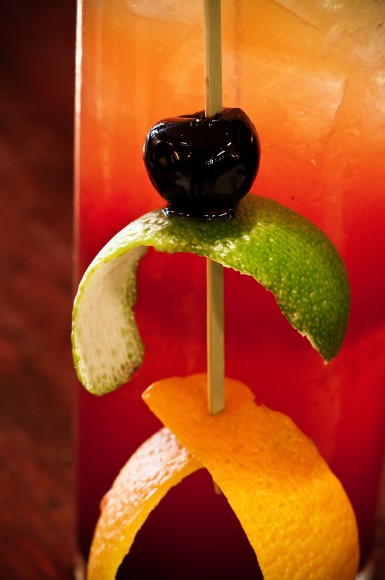 From July 21st to 25th at Tales of the Cocktail in New Orleans (www.talesofthecocktail.com) you’ll surely be drinking all sorts of things – some served up elegantly in a proper cocktail glass, some proffered in a cute Tales of the Cocktail branded plastic cup, and yes, some even straight out of the bottle (we know the truth, you can’t hide it). Plenty of ways to enjoy the variety of spirits that will pass before you, and surely you won’t want to miss too many opportunities to try new things and old favorites. But if there’s just one drink you ought to make sure you get your hands on this year its Evan Martin’s Death in the South Pacific…aka the official cocktail for Tales 2010.

Martin’s winning drink came together long before the official cocktail competition was announced. He explains, “The inspiration for the drink actually came a couple years before the competition. I was working on a drink that I wanted to be a bit over the top, like a Zombie, but also have many layers of flavor and create a unique balance between multiple sweeteners with very little fruit juice or just a little citrus like a Mai Tai. A drink that when you look at the recipe would seem maybe a little “too Tiki” and maybe too sweet, but would have a surprising balance that really honors the work of Don the Beachcomber and everyone else that was so ahead of their time during Tiki’s heyday.”

With the heyday of Tiki long behind us, but the new dawn of a Tiki revival clamoring for our attention, it made sense that this year’s competition put entrants to the test with a Planter’s Punch recipe. Martin shares his thoughts on why his concoction, which is currently on the menu at his bar Naga, took top prize, “I feel that the drink was a winner because there’s no doubt that it’s a classically styled Tiki drink and I feel that my mission on its layered flavors was a success with this recipe. The garnish and name also met the criteria well for the competition and I’m sure gave it a boost. I guess you could say I had the advantage of time as well since I feel it is very difficult to create crowd pleasing Tiki drinks. There’s a fine line between a gimmicky drink and something that actually tastes good in the Tiki world. Also, the fact that the recipe called for ingredients from so many of the great sponsors made it very convenient that I just happened to have just the drink for this competition(and made it easy to make a tasty drink) and it could have helped my standing utilizing so many sponsors. This does sound a little wordy for one drink, normally I could describe a drink with a few words, but I can honestly say quite a bit of time went into nailing this drink down to what I really wanted it to be.”

Build drink in Zombie shell glass and swizzle with crushed ice. Fill with additional crushed ice and pour in a half ounce each of Grenadine and Cruzan Blackstrap Rum.

Garnish:
Place a brandied Cherry on a bamboo pick and insert a pineapple leaf followed by a strip of orange peel by cutting the peel of off a fairly thick orange slice leaving a fair amount of pith.

Insert straw through the loop of the bamboo skewer. 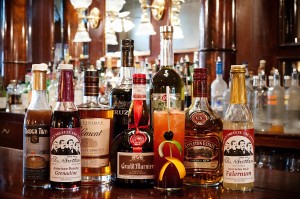 HUNGRY FOR A BRIGHT FUTURE