Proof That Overproof Is What You Need
By Ted Henwood 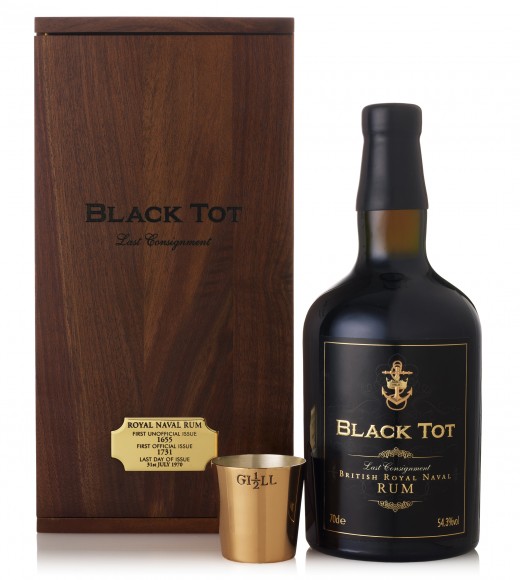 With the recent release of the last of the Black Tot (rum rations distributed to British Sailors through July 31, 1970) our thoughts turn to figuring out how to get our hands on some of this spirit which holds an iconic (and now expensive) place in beverage history. As we contemplate affording this purchase we think back to July in New Orleans at Tales of the Cocktail 2010, the annual cocktail conference which brings together the best and greatest of the cocktail, spirits, and tastemakers’ industry to the city that has survived and thrives. It was here that we were treated to a seminar titled At Full Sail: The History and Application of Spirits at Proof and Overproof.

Led by the founder of Haus Alpenz, Eric Seed, a lover and re-creator of authentic spirits and liqueurs, we embarked on what demonstrated to be a gentle gaze at the pyrotechnics and genesis of liquor distribution.
Seed remarked, “We are hard wired for the taste of vanilla and milk.” And thus, the seminar began. In light of Seed’s condemnation of our desire for the soft and sweet palate pleasers you might ask overproof spirits, why? And why no longer cask strength? And wherein does the difference lie? Seed’s opening comments make it evident that his fight in part is to cut that wire at every turn, or at least begin to rewire that beast in us. One taste of the “Waters of Life” he has resurrected, and you will soon become one of the converted.

But before conversion it’s important to lay out the well known facts. So, let’s get simple; we know the amount of alcohol in any given spirit is indicated by proof, percentage or ABV. Stateside, proof is really the commonly known mark. Certainly almost everyone knows that proof denotes twice the percentage of alcohol. Yet how did this come to be?

Well, the answer has to do with the “work-hard play-hard” motto of the open seas, when ships were powered by three sheets flapping, and the boys pulling the ropes taut knew how to celebrate their unfettered creed. These sailors were paid in part with hard liquor, and knowing the value of a stiff drink, they developed a method to ensure their daily ration had not been made water-weaker by the ship’s bursar: apply gunpowder!

They’d take a dram of hooch and spill it into a saucer, shake a small cone of decent black powder into that shallow little pool, and touch it with a struck match. If a bright blaze, pop, and eruption of smoke ensues, they’d “proved” that their tipple is well above 50% alcohol –- thus that it’s at “proof.”

If the match fizzles and the powder stays silent, they might rise certain to mutiny that the well-deserved snort proves corrupted; stretched with water by the greedy man with keys to the barrel room, in hopes he might black-market in port what he has skimmed.

Enough said? Perhaps. Days of yore? Maybe not so ancient. Take a look at your own liquor cabinet. Your proof has fallen. Is there some skimming going on there too? It’s not a shock to find 80 proof juice these days, but it should be. You’re paying the same for less spirit, and your hard work is being undervalued as the modern bursar has learned to stretch the supply, making bigger profits by adding more water-in-bottle.
Yet, perhaps stronger in the bottle isn’t better, because we’ve all seen (and maybe been) the sailor with a few too many, staggering the streets. Maybe less proof is merely the modern evolution of liquor distribution; as steam and combustion replaced sailor’s muscle, letting the gunwales rest, and thus creating less need for hard play.

Well, as it turns out, that’s not the case. Stronger maybe better when it comes to taste – the taste of your cocktail.

Cask strength spirits might begin to rage wild and wide across the sea of America if the sophisticated palate has its way. And the storm has begun in places like Pegu Club in New York City. Ask the Libation Goddess, Audrey Saunders, how much better a classic Manhattan tastes when stirred with Bottled-in-Bond rye rather than its flimsier sister bottlings. Your answer (to paraphrase Saunders’s opinion on how much better a cask strength spirit performs in a cocktail), “Hands-down-no comparison-walk-the-plank-if-you-cannot-discern-and-keep-your-cherry-on-the- side, Ensign.”

Alcohol makes things taste better, as anyone will tell you if they’ve dined and drank enough. Just a fact of the human tongue. Physics? Sure, no doubt science will proof one day how C2H5OH molecularly stimulates that yet discerned ganglia-nerve-ending- synapse-thing of the taste buds, but right now look back in time. Dining includes fermented and distilled juice because your dinner smacks tastier with it.

And it turns out, a cocktail has more flavor at Navy Strength when correctly achieved with balance. And so does the base spirit it’s made with. Both with moderation please.

Moderation and sharing the experience, of course. Wayne Curtis, historian and author of And A Bottle Of Rum: A History Of The New World In Ten Cocktails gave a live demonstration of “proofing a spirit.” It was no disappointment. We had a fizzle at less than 50% (Pama Liqueur), and unexpected fizzle just above (no names mentioned of the gin at 57%), yet when the flame hit the strong stuff (Lemon Hart 151)– Flash! Sizzle! Poof! we all returned to the salty-air glories of days past.

And to finish the afternoon lesson, a taste of old glorious rum, bottled from an ancient cask on the commencement of Black Tot Day 40 years ago, was eye-dropper dripped preciously onto anyone’s tongue who managed to elbow their way to the front of the room and gawk like a foundling.

Leaving us wanting more of the little that’s out there to get.

BEST OF THE BIVALVES