Defining the role of the modern day fromager
By Michelle Loayza

For the average diner, defining the role of the fromager is about as hard as it is for you to find (legally) a raw milk camembert in the US.

“If you say the world ‘fromager,’ most people don’t really know what you’re talking about,” says Jenny Harris, Executive Chef of Tria in Philadelphia. Customers vaguely familiar with the concept may associate it with the man in the buttoned-up French restaurant who rolls over the cheese cart accompanied by a side of intimidation.

But the intimidation factor diminishes as more Americans are becoming cheese literate and artisan cheese makers are beginning to rival their European counterparts. Restaurants now more than ever have the freedom to challenge their customers with obscure cheeses and new pairings. But as the vast majority of establishments continue to have a manager or sous-chef select the cheeses, the fromager position is still not a priority on most restaurants’ payrolls. Though it should be. While not nearly as common, a fromager is to cheese as a sommelier is to wine. The fromager chooses the product, cares for it, helps customers make selections, and recommends pairings. Borrowed from France, the position in the States has been traditionally linked to high-end, intensely serviced restaurants.

These service oriented restaurants embrace the fromager role in order to provide guests with cheese offerings that receive the same kind of detailed attention that is paid to the rest of the menu. According to Jason Donnelly, Director of Wholesale at Murray’s Cheese in New York, “It is an old school position, but it is old school in the sense that it only works at certain types of restaurants that have a certain style. It is not something that you find in the mid-scale restaurants and certainly not in the lower end.” 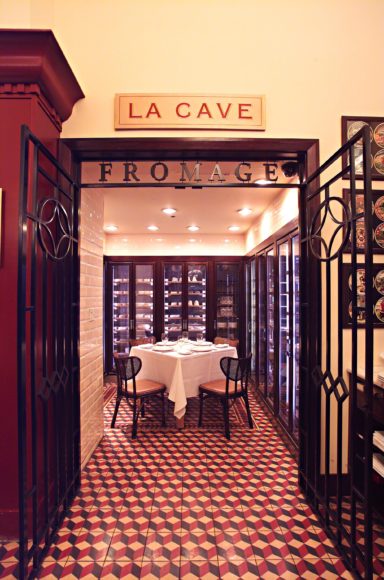 These days, there are only a handful of people practicing the craft in its most traditional form. Max McCalman, of the cheese-centric restaurant Picholine in New York, is perhaps one of the best known traditional fromagers. Another one is Pascal Vittu, of the Michelin three star restaurant Daniel. “He is, in the truest sense, the pure Fromager,” says Donnelly of Vittu. A slim, elegant, silver haired French man with a warm voice, Vittu takes great pride in his job. He builds upon his extensive knowledge by tasting, traveling, and sometimes even making cheese. Says Vittu, “It’s important to be close to the cheeses.” Working at Daniel since 1993, Vittu today oversees the ambitious program of about twenty five to thirty cheeses on offer each day. His selections are influenced by seasonality, quality, and the wine offerings. He continues, “I always try to match in my selection the complexity of the wine list.”

For him, history and terroir are the best cues for a successful pairing. At the same time, Vittu is not wholly tied down to conventions and has been responsive to the American cheese movement. Whereas Daniel’s original cheese program had a decidedly French bent, today a third to nearly half of its cheeses come from artisan American producers. He constantly seeks out the best cheeses, whether it takes him to Uplands Dairy in Wisconsin or to famed affineur Rodolphe Le Meunier’s facilities in France’s Loire Valley and counts among his favorite American cheeses Uplands’ Pleasant Ridge Reserve, Cato Corner’s Hooligan, and Cowgirl Creamery’s Red Hawk.

As Vittu has been filtering American cheeses onto the list to appeal to his expanding interests Vittu has also noticed customers’ changing tastes. Early on, he would have to field questions about fat content. Today, customers are more likely to ask questions about seasonality. Demand for more challenging pairings than the traditional dried fruits and nuts have also influenced Vittu. Working with pastry chef Dominique Ansel, Vittu creates unique parings such as raspberries poached in balsamic vinegar for washed-rind cheeses. In the spirit of Oktoberfest, Vittu also admits a current predilection for untraditional pairings such German wheat beer with the Hooligan.

Unexpected pairings and an easygoing attitude made Tia Keenan of New York City’s influential cheese and wine bar, Casellula, an instant success. While Vittu may be the epitome of the traditional fromager, despite his untraditional pairings, Tia Keenan represents the new wave of cheese expert; one who’s approach aims to erase the intimidation factor Americans associate with cheese. Young, American, and not beholden by tradition, Keenan helped start Casellula in 2007. There she helped establish a more casual, yet still innovative cheese program. Realizing that Americans were becoming more cheese savvy, Keenan wanted to evoke a sense of adventure and exploration in the cheese course. She explains, “I really wanted to re-imagine it and make it modern and interesting and American.”

For influence on her favorite pairings, Keenan would take cues from classic Americana. To make a French goat’s milk cheese more approachable, she would pair it with a cream cheese fudge. While she began with familiar flavors like fudge, today she is toying with the idea of Asian flavors. She sees the heat and acid of a curry, for example, as a possible compliment a cheese. “The cheese plate is still really unexplored,” says Keenan. Today Keenan works as an independent consultant and is focusing upon her next project, a casual restaurant she hopes to open in Brooklyn in 2011. Keenan loosely compares the idea to an izikaya, a casual Japanese drinking and eating establishment, but with a progressive focus on cheese, of course. Cheese 2.0, as she calls it.

Jenny Harris, another representing the new wave of fromager, also takes a progressive approach to cheese in her restaurant, Tria. At this casual but serious cheese establishment, Harris selects the cheese, curates the list, and does hands-on training with the staff. While Harris oversees everything cheese related at Tria, she contends that it is a group effort. Instead of having one person who interacts with customers and takes care of their cheese needs, the whole staff at Tria gets involved and is expected to be cheese literate. Customers can then look to their server for guidance in selecting one cheese or an elaborate course with beverage pairings. She explains, “I like to keep it really simple. You can create your own cheese experience or you can have someone guide you.” Her favorite part of the job is, she admits, “always tasting new cheeses to inspire me and make our cheese program better.”

Despite the flourishing interest in cheese in American restaurants which results in better and wider selections, a fromager is still rarely behind the respectable selections at many restaurants. At the recently reopened Avec in Chicago, John Anderes is primarily the sous chef and an accidental fromager. “It’s something that I like doing and comes with the territory,” he says of selecting the cheese. Learning most of what he knows about cheese from his five years with Avec, he caters his selection to work with the predominantly Southern European wine list. For a more casual establishment like Avec, which likens itself to a wine bar with small plates, it would not make economic sense to have a separate position for a fromager, says Anderes. “But the name is really cool.”

Even with a cool name, the fromager will probably never gain the same prestige or ubiquity of the sommelier. “Cheese is never going to be what wine is financially or its place in our culture. A sommelier is selling a drug and that drug is alcohol. It’s really different from cheese in that way,” says Keenan. At the same time, the fromager may be gaining traction in the cheese world. The American Cheese Society is in the process of creating a certification program for the fromager, similar to an existing program in France. The Fromager Certification Committee is currently compiling a Body of Knowledge as a basis for a possible exam for cheese professionals in the future. With more knowledgeable customers and an ever expanding variety of artisan cheeses, they may be anticipating a greater need for cheese professionals in the future.

For cheese lovers, whether in a five star setting or informal bar, the fromager is here to stay.

Critical Distance: The New Rules For Restaurant Reviews—There Are No Rules

PROMOTION. AT WHAT PRICE?