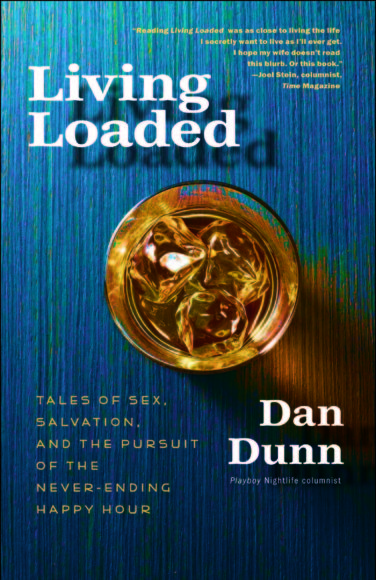 Who has the audacity, at the tender age of 40, to pen a memoir about his hard drinking days? Dan Dunn, that’s who. And why not? This booze scribe, known to Playboy readers as The Imbiber and the “conductor of my vicarious life” (as Rob McElhenney, creator and star of It’s Always Sunny in Philadelphia, puts it so succinctly), has spent more nights out than anyone can count and surely most were spent drinking in the name of journalistic research. What he can remember is really funny.

And poignant. And a valuable life lesson that rings true (in a non-preachy way, though there is mention of Jesus), despite the fact you may not want to face it. When we asked Dunn what he was thinking when he penned Living Loaded he replied, “What was I thinking? Not much thinking, actually. I’m an action man.” And so, we have his latest book chronicling drinking and carousing and spirited adventures with spirits, strippers, ex-girlfriends, semi-public nakedness, family drama and good drinks, which goes on sale today.

Why do you want to read this book? Well, first and foremost, if you’re reading this column it’s quite possible you also know Dan which means there are probably nights spent with him you’d either like to forget or did forget. If it’s the latter you’ll want to check out the book to see if Dan’s trusty recorder and note pad he carries with him everywhere managed to capture the details of that fateful evening. If it’s the former then you’ll empathize with him the whole way through these hilarious 262 pages.

Maybe you don’t know Dan personally, nor do you know of his wild escapades through his Imbiber column, but you need a few good cocktail recipes. They’re in there too – some of the world’s best bartenders have conjured up new cocktails specifically created to honor the rabelesian life Dunn leads and you wish you did too. So, next time you’re looking for the right cocktail to prove you know how to drink like a man ready for any occasion, look no further than Living Loaded.

And if the book wasn’t enough of a laugh and a head shake as you wonder how someone could go through all that and write about it (potential lawsuits aside) we’ve learned that you can live vicariously for a half an hour at a time thanks to the Fox network. Dunn shares, “It hasn’t been announced yet but Fox just bought a pilot for a half-hour scripted comedy based on the book and my life. I created the show along with Rob McElhenney of ‘It’s Always Sunny in Philadelphia.’ Not bad for a punk from Philly, I guess.”

Tall Paul was the P in P&J’s – the owner, head bartender, and karmic standard-bearer of the establishment. He was a 6’7”, 250-pound behemoth renowned for his kind, humorous nature and large sledgehammer-like fists. He was a teddy bear most of the time, but woe be to troublemakers who attempted to make their trouble in his joint. Because if tempers flared and reconciliation failed, Tall Paul could kick the living s**t out of anyone this side of Superman. To me, though, he was a gentle and benevolent giant who always made sure my glass was filled with Coke and that I never ran out of change for the pinball machine. He even gave me my very own extra-tall stool so I could see over the tops of the pool and shuffleboard tables. Kept it safely stored behind the giant barrel of pretzel mix, next to the men’s bathroom. I used to live on that pretzel mix – until the day I witnessed a grubby old degenerate exit the bathroom without bothering to wash his hands…P. 172-173

And, if this wasn’t enough to whet your whistle, perhaps a little encouragement from The Most Interesting Man In The World will send you to your local bookstore to pick this up. www.youtube.com/watch?v=HtN_77hNKqw

Still not convinced? Or want it for free? The first three people to correctly answer the question below and respond to francinecohen@insidefandb.com will win an autographed copy of Living Loaded courtesy of INSIDE F&B.

At what bar did Dan spend his childhood years sitting on a tall stool and playing pinball?