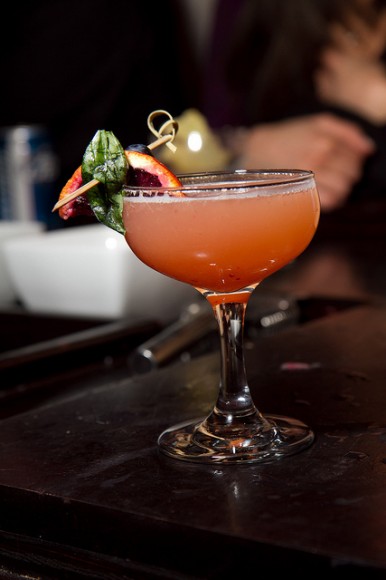 Cocktail Jam, the proving ground for bartenders where exploration meets the truth, kicked off the drink festival season on March 28th at Astor Place with a gathering of one dozen of New York’s most professional bartenders laying it all on the line in pursuit of the greatest prize of all…bragging rights.

They call them the dirty dozen; 12 of the city’s top bartenders who promoted their newly concocted cocktails created with the finest spirits, mixers, and garnishes, as they vied for a $2,000 Founders Day package prize that sends them to New Orleans for Tales of the Cocktail (July 20-24). 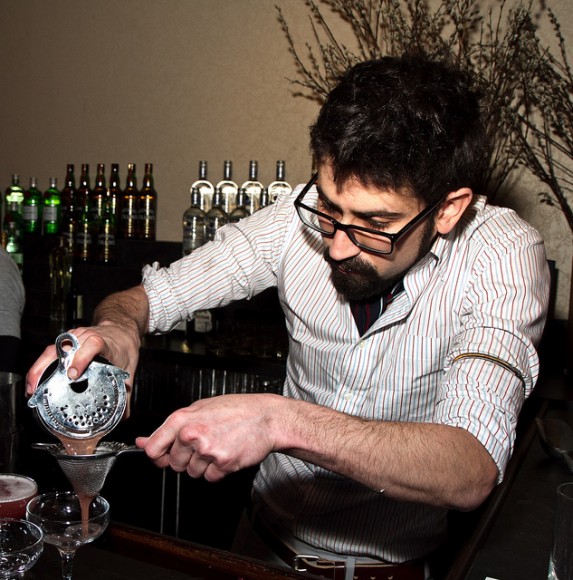 Originally created by PipeLine Brands in 2009, Cocktail Jam showcased the best brands on the market adeptly mixed by the hands of these dozen mixologists, and raised much needed funds for tsunami relief.

John Henry of PipeLine Brands says, “I am delighted to see President Jason Littrell and the USBG NY take our “CKTL JAM” creation to new heights–in fundraising, fun and by broadening the guild’s awareness. This is an annual tradition at Astor Center for the bartender community, run by the bartender community. May USBG membership thrive as a result. Our PipeLine Brands is a proud part of the team effort.”

The team effort to pull this event together was led by USBG NY President Jason Littrell who comments, “The USBGNY is very proud to be an organization of creative professionals with a social conscience. The Cocktail Jam represents some of the core values our organization; education and charity. With a ‘what you see is what you get’ approach to making cocktails, the level of skill required to make something delicious is pretty high, and all 12 bartenders really stepped up and blew some minds using only the provided ingredients. Without the cooperative efforts of a small army of volunteers, guest judges, spirit producers, bartenders, and especially Astor Center, none of this would have been possible.” 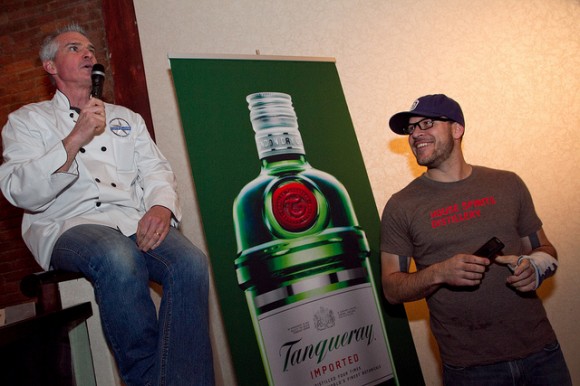 The participating bartenders pulled it off handily, each presenting their cocktail to the esteemed judges who possess some of New York’s most progressive cocktail minds: Giuseppe Gonzales (Painkiller), Stephanie Moreno (Astor Wines & Spirits), Phil Ward (Mayahuel), Thomas Waugh (Death & Co.), and Jim Wrigley (Santa Teresa rum). With cocktails circulating throughout the crowd during each round, every drink was also put to popular vote and, at the end of the night, Rob Feuntevilla of Mayahuel walked away with the big win and Steve Schneider of Employees Only was crowned “crowd favorite.” 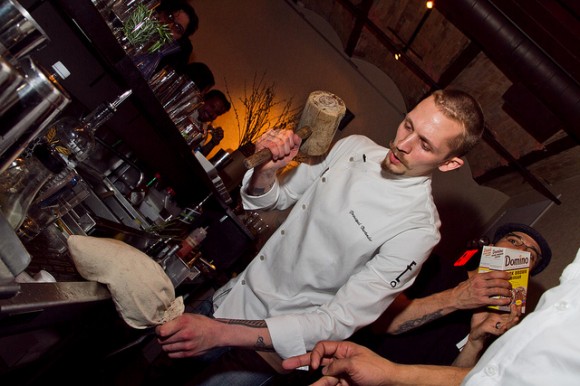 The crowd of thirsty cocktailians were eager to allow the bartenders free reign to create, and rewarded that creativity, as excitement for the summer’s biggest cocktail event – Tales of the Cocktail – filled the room. Enthusiasm about drink creation and experimentation starts with the bottles on the back bar as new and favorite spirits come out to play and this year Absolut joined returning rum brand DonQ as well as Campari, Cherry Heering, Coffee Heering, Denizen rum, Dry Sack sherry, Four Roses bourbon, Fruit Lab Organic Liqueurs, Herradura tequila, Lillet, Michael Collins Irish whiskey, Nolet’s gin, Perfect Puree, Pierre Ferrand cognac, Sagatiba cachaça, St-Germain, Santa Teresa rum, Solerno, Tanqueray, and Tuthilltown whiskey, all having their bottles firmly planted on the bar and at tasting tables available throughout the evening. Uber Tools were available behind the bar, making the muddling go that much faster. 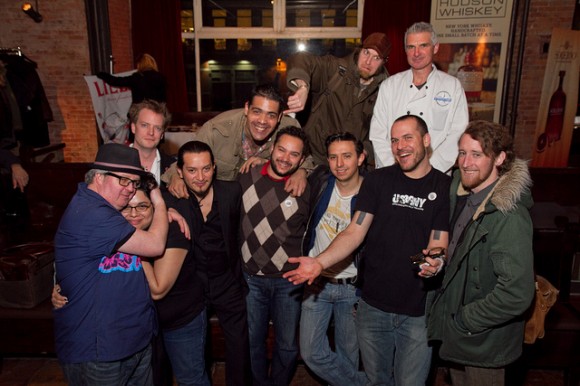 COCKTAIL JAM has done so much more than just muddled along since its debut as the brainchild of John Henry, PipeLine Brands partner. It’s become the ultimate annual battle with bragging rights as the prize and a plethora of spirits plus virtually every imaginable herb, spice, berry, fruit, and vegetable as the ammunition. Jennifer Smith, General Manager, Astor Center concludes, “What makes the Jam different and special is that it brings talent from all over the city together in one venue, for a full-bore, elbows-and-shakers swinging good time. It is equal parts creativity and competition, and results in a truly unique show for guests.”

**** Hear about Cocktail Jam from the winners’ perspective:

The truth of the matter is that I didn’t treat it as a competition. Jason and the USBGNY committee had a great idea to do what we do best, and help people. I wanted to help raise money for a good cause, and just have fun with my bartending friends and family.

It’s not every day I get to work side by side with some of the best bartenders (and old friends) in New York like Damon Boelte, Steve Schneider, Frank Cisneros, Karin Stanley, Moses Laboy, James Menite, Ivy Mix and Hal Wolin. It was also a great time meeting and working for the first time (and hopefully not the last), with new friends like Michael Neff, Duane Fernandez, and Justin August. I had not worked with these three great bartenders before and they rocked it!

It was a little hectic while getting everything ready, but most of us showed true professionalism, adapting, overcoming and helping the USBGNY team pull off another successful event.

Although, the win came as a complete surprise, truthfully I knew I had a good drink, but I was just trying not to embarrass myself in front of the esteemed judges. I knew with the caliber of bartenders there, it would be tough.

Blind Side
By Rob Fuentevilla

Steve Schneider
It’s always gratifying to know that the masses have your back and are having a great time. The crowd is the pulse of any bar or event and I feed off of it. It is why this business will never get old for me. Like any event, my Employees Only comrades came in packs to support me, and for that, I am grateful. Grateful to work for a cocktail making machine with my family at EO.

I was inspired to make the Fo’selle cocktail from a dear friend and fellow EO bartender, the brilliant Robert Krueger. When you think of the ingredients, fresh grapefruit, fresh lime and hibiscus -it is a universally appealing blend. I decided to stick with my usual view of a quality cocktail which is: not too difficult to make, fast, efficient, and appealing to a wide variety of drinkers (sell! sell! sell!)

We, the competitors, lined up before the show and picked the brand we were going to represent out of a hat. I drew Four Roses Bourbon. We didn’t have much time, space, or supplies to create a cocktail – so we had to think fast, which was the beauty of it. I already knew I wanted to have a cocktail with crushed ice, as it’s always fun to bring out my obnoxious mallets and hammers to crush ice to a pulp. The crowd seems to dig the whole “Thor” show.
The judges, some of the most well respected men and woman in the business, were all a lot of fun to interact with. Not only do they push out a quality product at their respected establishments (Painkiller, Death and Co, etc), they know a quality one as well.

What better person to bring us a winning cocktail than Mr. Rob Fuentevilla. Rob is one of the most brilliant cocktail minds in the business, and sitting at his bar at Mayahuel is an absolute pleasure. Whenever I’m in a competition and I see his name on the card, the question isn’t “How can I win this competition?” It’s “How can I beat Rob Fuentevilla?” He delivered again and won on the judges poll with a much deserved cocktail featuring Herradura Tequila. He also was a prominent leader behind the scenes helping Jason to batch all of our cocktails for the crowd. I respect the hell out of him as a bartender and even more as a man.

All in all, I was honored to be invited to participate in this event by Jason Littrell and the USBG. After getting a chance to meet and hang out with the other competitors (most for the first time), I figured that if anyone didn’t belong with this star-studded group of bartenders, it was me. They are all amazing at what they do. Thank goodness the crowd reminded me otherwise. Voting me “crowd favorite” reminded me that I belonged amongst the top in their eyes, and in my heart! I’m glad I got the opportunity to represent Employees Only and the USBG at a spectacular fund-raising event and hope I get invited back next go-round!

An adaptation of the Roselle cocktail by Robert Krueger

By Steve Schneider, Employees Only

Shake and pour over crushed ice in an old fashioned glass, garnish with a mint crown. Drink quickly and have another. 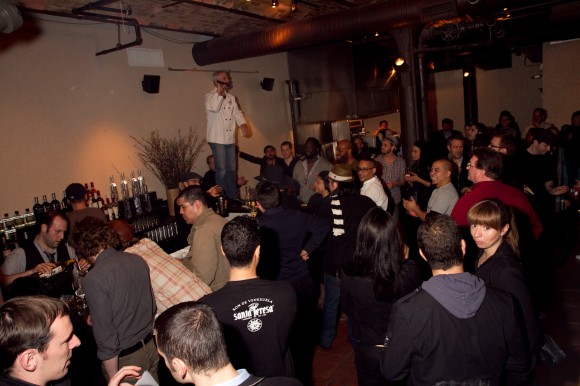