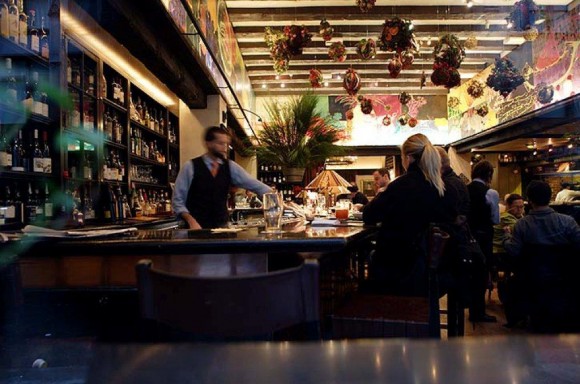 What if you weren’t a bartender? What if you decided to become an accountant or a lawyer with a corner office in a big firm in a fancy office building; what might that career and that life have looked like? Would it be more serene? It definitely wouldn’t have involved wet hands all night long. Could you have been happier with a 9-5 existence, living in a classic center-stair colonial in the suburbs with the sporty yet highly-rated-for-safety car parked in the driveway next to the beautifully manicured lawn where your two perfect children romped with the dog as you and your loving, normal, stable spouse sat at the breakfast table sipping coffee and reading the morning paper before the kids headed off to school and the adults went into the office where they spend eight hours playing politics, jockeying for position, and pushing papers under fluorescent lights? Maybe.

Yes, really, you might have found this rewarding. But then again, maybe not. You made the best choice for you. Though, one thing is certain that this corporate life would offer that a bunch of bottles and a breadth of wood can’t…protection from the unwanted attention of stalkers and groupies.

Think about it; with the rare exception of gun toting/bomb wielding disgruntled ex-employees or husbands who have a beef and show up at the office and consequently on the six o’clock news, groupies and stalkers are not an everyday corporate occurrence. But they are an unspoken part of the job when you’re a bartender. As E. Tecosky* of Los Angeles puts it, “You’re a bartender. They can come see you at work.”

And come they do. Without a security guard at a desk and an elevator key access required these folks can waltz right in and make your night stress filled. From the girl who thinks that your smile and kind words mean you’re really into her and she should sit there every shift and only allow you to make her drinks, even if the bar is four deep and there are two other bartenders on, to the tiki and bitters geeks who want to spend the whole night having your full attention so that you can discuss the most intricate details about ingredients and lost recipes.

These people can become an occupational hazard. It’s a hazard that’s seemingly unique to bartenders as C. Bunnewith* of Boston comments, “Being behind the bar, it is so easy for the customer to confuse the bartenders role, I feel sometime you have to take the car mechanic mind set and understand that you are offering a service, the quality of your service builds a relationship…why don’t car mechanics have stalkers and groupies?”

Maybe it’s what you’re selling. And at a much cheaper price than a new alternator. Unlike the grease filled car repair shop, the bar is filled with delicious things that alter moods and elevate expectations. So, while there are plenty of great friendships forged across the bar stories like this one from AL. Marquis* of New York, “One guy was a devoted customer, came only when I worked and marked my schedule on his calendar. He always let me make whatever and always enjoyed what I made. Never hit on me because ‘why would he want to ruin his relationship with his favorite bartender?’ Over the months we became friendly and when he told me he was moving to DC I set him up with my best friend who lives out there as they have similar interests- they are now dating and totally in love and talking about rings and things. That’s a sweet story- the way fans should be, and how relationships begun at the bar can grow into more than just a bartender/ guest relationship. Even in our dealings now I am still principally his bartender and now, the genius who set him up with his dream girl so he really thinks I can do no wrong. ” There are plenty of stories about people who need to be told directly and firmly to “act normal” or they’re 86d.

Marquis continues, “I do have enough stories of guys who come to my bar and then find me online, write me emails, say weird comments to me at work, etc. I’m pretty good at shaking them.”

While shaking them in the bar might mean employing tactics like witty comeback lines intended to deflate interest, and finding a creative way to put an overzealous patron in his place sometimes you need to call in reinforcements; like a fellow bartender, a manager, or even security when someone gets out of hand. That’s fine when you’re at work, but it can happen elsewhere too. Bunnewith notes, “The worst is when they find you at a bar. Unprotected by having a bar in between, then things get weird. This actually happened two nights ago…I escaped thankfully.”

To plan your escape, or avoid the situation before it even escalates to that level, here are some tips from Bunnewith:
1) Never hand a business card to someone who’s not business.
2) Lock the door and get a cab on the side street.
3) Sometimes you have to be straight up blunt to people. Groupies and stalkers rarely improve, you’re better off without them.
4) These are the customers you need to be able to control and direct a conversation in the right direction, if you lose control of that dialogue…this is where groupies and stalkers can perceive your role as a bartender as something it isn’t.

*All first names and places of employments have been removed to protect the privacy of these individuals. If you know who they are, feel free to stop in, say hello and have them make you a drink.

A TASTE FOR WHISKY LIVE!