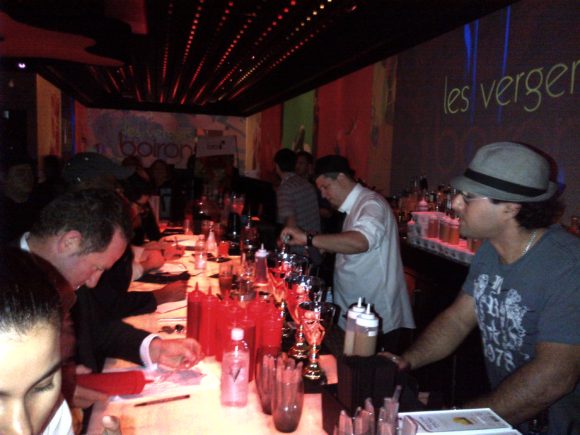 When running a bar you have more than enough responsibilities weighing on your shoulders and chances are there’s not enough time, nor mental energy, to keep track of the harvest seasons so that you can stock your bar with the freshest fruit of the month and figure out what best to do with it. Fortunately, Josh Gates of Pollo Y Jarras/ Wassaka Lounge in downtown Miami (www.pollosyjarras.com), and Flairbar.com (www.flairbar.com), who is the winner of the recent Les Vergers Boiron Cup (www.boironfreres.com/uk/uk_prod_purees_fruits.html), has some creative ideas.

Tapping the company’s line of 52 puree varieties to create his winning drinks Gates identified some terrific combinations that wowed the judges in Miami and are sure to please your guests. Every competitor was tasked with submitting their own original cocktail recipe that included the use of one of the Boiron Citrus Flavor components as well as the spirit/liqueur of the competitor’s choice.

Gates presented the judges with the “Boiron Supremacy,” a trio of three cocktail recipes. In his first mixture he paired Bombay Sapphire and Boiron Kalamansi (a citrus fruit widely cultivated in the Philippines). For the second cocktail he blended Bacardi Oakhart Rum, Boiron Red Pepper, and Boiron Lime. Finally, in his third creation, he fused together splashes of Bacardi Superior with Boiron Fig, and Boiron Lime.

Gates says, “The Boiron Cup was an amazing experience. Boiron is such a superb product I really wanted to use as many as I could. The competition had such a talented field of great bartenders and I was lucky to come out ahead. I would like to thank Robert Miller of Boiron for sponsoring the competition as well as Freddy Diaz of Alambiq, Isaac Grillo of Haven for hosting the competition and the judges; Ray Raymond, Gabe Urrutia, Cricket Nelson and Jerome Robin.”

Pour ingredients into an ISI carbonizer and charge with CO2, wait approximately 5 minutes and charge a second time, chill before serving.

Shake and strain all ingredients into martini glass

6 oz Boiron Fig puree, 1 oz Bacardi Superior, 1 oz water whisk to make a liquid consistency. Take 120 grams of mixture and 1 gram of powder agar agar and bring to a boil. Pour into mold and refrigerate until solid.
Render 4 slices of thick cut bacon until crisp. Bring 6 oz of half and half and 1 oz of maple syrup to a simmer. Remove bacon from pan and pour half and half mixture over bacon. Allow mixture to infuse for 12 hours. Fine mesh strain mixture and pour into a whip creamer. Hollow center of “Fig” and fill with bacon cream.