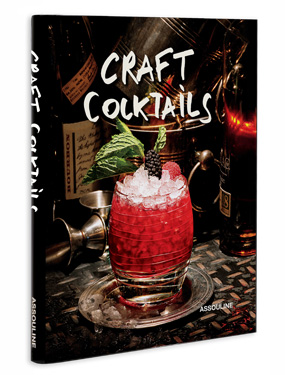 Craft. Think about that term in relation to furniture makers and you conjure up a small workshop with myriad tools; each with their own unique purpose. Each wielded by an artisan who has dedicated many years to mastering the intricate details that go into making his final product a work of art. The craft of the bartender is no different. And nothing illustrates this more beautifully than Brian Van Flandern’s second cocktail book which includes 50 of his own recipes plus 20 from the likes of Jim Meehan, James Menite, Eryn Reece, Julie Reiner, Dushan Zaric and other professionals from Clover Club, Death & Co., Employees Only, and PDT – the stunningly photographed Craft Cocktails.

Van Flandern explains how Craft Cocktails, his second book, came to life, “After the amazing success of Vintage Cocktails I wanted to release a book that would be appreciated by the multitude of fellow mixologist but still be accessible to the masses. Vintage Cocktails was released in late 2009. It won Best Cocktail Book of the Year 2010 from the Gourmand Cookbook Awards in Paris. It is now in its fifth printing and is distributed in dozens of countries throughout the world. Even though the recipes are simple classics, I was thrilled that so many industry professionals really loved the layout and design of the book. When I left Michelin Three Star Restaurant Per Se in 2007, I wanted to write a book showcasing the recipes that I created. However, while I was the consulting mixologist for Bemelmans Bar at the Carlyle Hotel in 2008, Assouline Publishing approached me and asked if I would help them pick and style the content for Vintage Cocktails as well as write the introduction for the book. After the massive success of the first book, it took little nudging to convince Assouline to do a second book. By this time, I had a whole portfolio of recipes that I wanted to share with the professional community. More importantly, I really wanted to make a book that would stand the test of time. I decided to not only publish my craft recipes, but 20 recipes from other famous mixologist and lounges that helped to define the beginnings of the craft cocktail movement. While I could not include everybody, I hope to have immortalized several recipes and their authors. ”

To be able to take a classic like the Long Island Iced Tea, which may not be respected by serious bartenders but certainly is on the lips of thousands of guests daily and turn it into something that is well balanced? That is craft. To achieve the perfect hue of your corporate partner’s signature packaging (see the Tiffany & Co. Cocktail on page 105)? That is craft.

But, while Van Flandern crafted all the drink recipes in this time with specific products in mind selected for their flavor profiles he recognizes that the home bartender may stray from the recipes and craft their version with substitutes as their bar isn’t as well stocked as a professional’s. He notes, “I was very concerned about branding the recipes, but craft recipes often require a very specific spirit in order for the authors vision to be fully realized. Rather than getting paid by the bigger distributors, I deliberately avoided pandering to them and instead cut a wide swath across the spectrum, selecting individual spirits based only on their flavor profile, distillation techniques, provenance, history or terroir. In the end I am proud that I was able to showcase so truly fantastic boutique spirits that deserve recognition as well as represent many of the better known highly quality spirits on the market. There are MANY spirits that I didn’t get a chance to represent this time around. Maybe for the next book?”

If the next book is going to be as gorgeous as this one, and offers up drinks shot in memorable settings and presented in elegant bar ware like the Baccarat, Rosenthal Versace and Lalique crystal glassware used here to cradle these concoctions, we’ll be busy crafting our own cocktails while we are patiently waiting for the Craft Cocktails follow up.

THAT’S A LOT OF OUNCES