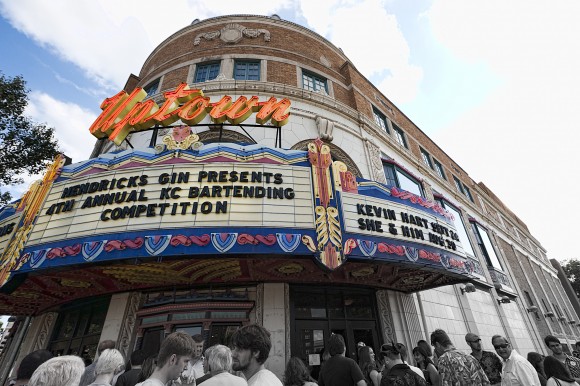 Set in the heartland where cattle is as important as cocktails, a whole new drinks fest is on the rise. Though the name belies a single event, don’t be fooled. This is not just some one night wonder competition that’s here and gone. The 5th Annual Greater Kansas City Bartending Competition is a week-long celebration of a lovingly crafted drinks culture that keeps pace with the rest of the country.

Ryan Maybee, the bartender/restaurateur behind Manifesto (www.theriegerkc.com) and festival co-founder, shares a bit about his brainchild for his hometown that next year will bear the name Paris of the Plains Cocktail Fest in honor of the nickname bestowed upon Kansas City during the Jazz Age by journalist Edward Morrow. He notes, “We’re branding it next year to indicate that it’s a festival and not just a competition. We think it’s great for Kansas City and for the industry. This year the competition itself will happen Sunday, August 21st; it starts at 7:00 p.m. and goes until 10:00 and throughout the evening food will be served and we’ve got live music and burlesque. But the week of that event – starting the prior Monday – there are going to be cocktail parties and tastings going on all around town. It will actually culminate with the competition.”

The competition features 13 contestants from Kansas City, and nearby cities END_OF_DOCUMENT_TOKEN_TO_BE_REPLACED

Bet you didn’t know that 2011 is the 100th anniversary of the rediscovery of Machu Picchu by American explorer, Hiram Bingham. Us either; until the good folks at Macchu Pisco www.macchupisco.com told us this interesting fact.

Even more interesting was learning that Macchu Pisco has partnered with the Peruvian government, Peru’s national airline Avianca Taca www.aviancataca.com, and Orient-Express www.orient-express.com to create a cocktail competition unlike most others.

More than just a cocktail competition, this spirited adventure celebrates the culinary culture of Peru – from drink to food and their origins. Lizzie Asher, President of Macchu Pisco LLC, comments, “While we toast to one Peruvian treasure being re-discovered by an American, likewise we can say that Peruvian Pisco is being put on the map thanks to bartenders who embody Hiram Bingham’s spirit of adventure.”

After traveling to Boston to judge their local competition this past Monday (a big round of applause to Boston’s winner, Naomi Levy of Eastern Standard Kitchen & Drinks www.easternstandardboston.com) thanks to an invitation from the Macchu Pisco team (including sister Melanie Asher who is the founder of the company and the brand’s master distiller) we know that the spirit of adventure needed for this competition is different than your normal approach.

So, let’s see, how can we explain it to you so fully that you’ll want to enter? Well, this one’s national (yes, we know, so are some others). This one allows every competitor to present their drink and describe it to the judges (yes, yes, we know, other competitions have that element too). This one has prizes for: the best tasting cocktail (uh, huh, we know, same old, same old); most creative/relevant to the topic (hmmmm, getting a little different here, aren’t we?); and takes presentation into consideration (tip – invest in pretty glassware, judges like pretty glassware). The Centennial competition is judged by both END_OF_DOCUMENT_TOKEN_TO_BE_REPLACED

Cocktail Competition Gives Back To The Planet 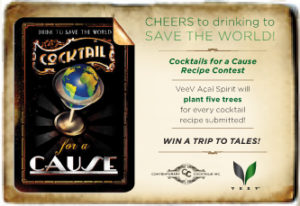 This just in from Aisha Sharpe, who, along with partner Willy Shine, runs cocktail consultancy Contemporary Cocktails www.contemporarycocktailsinc.com …Sharpe announces,“Willy and I have set up a company supporting charities for the global good called Cocktail for a Cause.

Their initial effort to replenish the planet that is mined for the products poured at the bar is tied into the 40th anniversary of Earth Day. But Sharpe and Shine know that while it’s noble to try and fix the world a drink at a time they can’t do it alone and so they’ve partnered with like-minded spirit producers Carter and Courtney Reum of VeeV www.veevlife.com. Sharpe explains, “For the month of April we have teamed up with VeeV to help them reach their goal of planting 10,000 trees in India.”

According to Shine, the association with VeeV and Contemporary Cocktails has a long and deep history and the two companies are eager to enlist the help of anyone and everyone who fancies themselves a mixologist and sees themselves steward of the earth. Getting involved is easy, just create a cocktail using VeeV and fresh, seasonal ingredients and submit it on the Contemporary Cocktails Facebook page www.facebook.com/#!/contemporarycocktails?ref=ts. VeeV has agreed to plant five trees for every cocktail recipe submitted.

Cocktails will be judged by fellow Facebook users, and on May 3rd the top three winners will be decided. Each of these winners is gifted with a free trip to Tales of the Cocktail (hotel and airfare).

To plant some trees, and submit your VeeV cocktails, visit the Contemporary Cocktails Facebook Page.

MARGARITA MADNESS AT TALES OF THE COCKTAIL

Just like taxes, but much much tastier, the deadline is looming for entry into this year’s Tales of the Cocktail USBG competition. Kicking off the fun on Friday, July 23rd this annual competition will feature USBG members mixing up their variations of a margarita with Milagro tequila as the key ingredient that shines through.
Entries are due in tomorrow, tax day (aka April 15th). Competition guidelines and an entry form are below.
Good luck!