Or Why I’m In Love…With Bourbon
By LeNell Smothers

I, honestly, have never had a bad bourbon. Some, like a few lovers I’ve had, have been a a bit quick in the finish or perhaps a bit too green, but I’ve never had a bourbon that didn’t please me in some way. I drink all categories of spirits. I’ve had gin, vodka, rum, tequila, and brandy that didn’t delight. However, there’s not a bourbon on the market that I would refuse to drink.

I could drone on about the American heritage of bourbon and how it’s patriotic to drink the only spirit Congress has declared a distinctly identifiable American product. Sure, other countries make whiskey, but only the US can produce a bourbon. George Washington may have made rye at Mount Vernon, but there’s something kinda romantically roguish about pioneering, rebellious folks avoiding taxes and bringing their whiskey makin’ skills further south, using a locally available grain like maize, and developing what we know now as bourbon.

When you think of bourbon, you may picture southern gentlemen in stately plantation homes sipping mint juleps and acting all civilized, but bourbon lends a little mischief to even the most genteel manners. Milwaukee madame and bar owner Dirty Helen loved her bourbon and her boys about as much as she loved wearing flashy, fancy hats. Legend has it that Elijah Craig was the first distiller to age corn whiskey in charred oak barrels, and whether that was true or not, it is fact that he was a Baptist minister. I love that bourbon can be at home in a variety of company, whether preachers or prostitutes.

Many people associate brown spirits with brisk fall breezes and holiday hoe downs. For me, however, bourbon is like leopard print—always fashionable no matter what season. If someone says they don’t like bourbon, I don’t blame bourbon. Something tells me they just ain’t had it in enough ways to discover the best way for them to enjoy it. The versatility of bourbon is one of the many things I love about it, whether adding it to my libations or my comestibles.

Bourbon’s a great addition to your marinade mix for a hunk of steak, a meatloaf, or even a hamburger. Bourbon’s natural sweetness adds depth to your bbq sauce. It’s my not-so-secret ingredient in my crowd-pleasing cakes, brownies, and banana breads. I use it as the base for my grapefruit bitters as well as my homemade vanilla extract.

Bourbon’s flexibility in mixed drinks is hard to beat. Mix it up with mint in a frosty summer drink or heat it up with honey, cinnamon and clove for a winter warmer. Bourbon makes a great pair with a variety of common fruits such as banana, peach, orange, grapefruit, and lemon. I like to infuse it with dried goji berries for a rich, exotic flavor that’s perfect in my Mae West Royal Diamond Fizz www.casacoctel.com/index.php?option=com_rapidrecipe&page=viewrecipe&recipe_id=63, an after dinner treat meant to add a little devilish twinkle to your eyes and a little mischief to your holiday season.

Shake all except Champagne to emulsify, then add ice.
Shake hard, at least 30 seconds.
Pour into chilled coupette half-rimmed with hot sugar.
To properly rim the glass, take a slice of the grapefruit and moisten the outside of the glass rim. Dip the rim in hot sugar.
Top with Champagne.
Garnish with two bourbon soaked goji berries on a toothpick to the side.

*Macerate 4 ounces of dried goji berries in a 750ml 100 proof bourbon (I prefer to use Four Roses Single Barrel). Let sit overnight at least. Squeeze out all the juice from the berries or put the berries through a juicer to liquify. 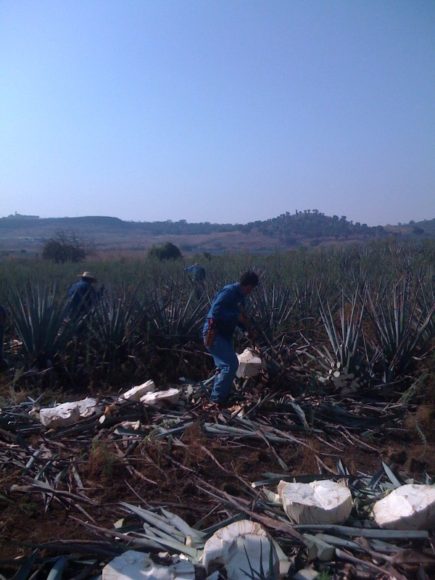 LeNell and Demian’s observation of drink preferences above and below the border got us thinking about the time we spent in Mexico this year, harvesting the piña in Herradura’s (www.herradura.com) agave fields and sipping refreshing beverages throughout a long hot day.

Every meal in Guadalajara seemed to come with either a Michelada or a glass of tequila (neat) accompanied by a zingy sangrita. Far away as we were from our beloved NYC based pickle back, the two-for-the-road drinking style wasn’t lost on us and we appreciated the one-two punch of flavors delivered from the earthy sweetness of tequila and the spicy, tangy hit of sangrita.

In honor of LeNell and Demian’s Casa Coctel (www.casacoctel.com) patrons who are swigging beer, brandy and Piña Coladas with great joy, we bring you a few north of the border interpretations of south of the border favorites that we know will bring joy to your mouth too.

Serves approximately 35 shots
***Best paired with Milagro Reposado. The complex, tropical fruit and spicy finish of the tequila is the perfect companion for the fresh, bright mint and cilantro flavors.

Pour over ice, add beer and stir well
Served in a glass rimmed with smoked paprika/salt mixed together 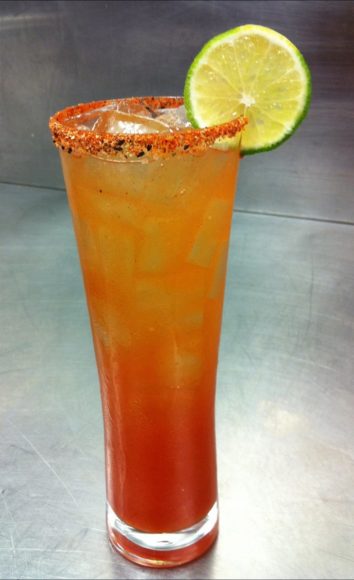 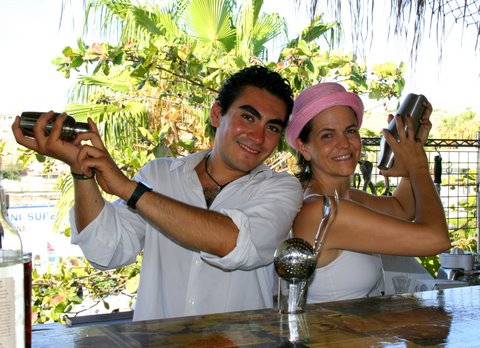 More than ever, drinks mixers are traveling and learning about trends and spirits in other markets, then returning to their home base with inspired ideas for their own beverage programs.

Casa Cóctel (www.casacoctel.com) may offer guests a menu reflecting our global interest, but it’s hard for a massive whiskey selection, amazing absinthe stash, and fancy cocktail menu to compete with Mexico’s number one beverage of choice—beer.

No one can argue that beer is Mexico’s preferred beverage with most of the market controlled by two corporate giants—FEMSA and Grupo Modelo. Corona is the leading Mexican beer brand in the US and in the Mexican market, as well. Tecate is the leading imported canned beer in the US with Tecate Light the leading light brand here in Mexico. With the overwhelming number of beverage sales here attributed to the beer category, it’s no wonder that cervezas preparadas such as Micheledas are on practically every menu in some form. Mixed drinks prepared with beer might include Clamato juice, soy sauce, lime juice, salt, pepper, or Worcestershire.

Like most of the cocktail drinkers in the US, most of our customers here in Baja California Sur feel more comfortable with a sweet or fruity concoction than a spirity, strong mixed drink. The typical customer knows the same drinks folks feel familiar with in the US: Vodka mixed with an energy drink, tonic, juice or soda, Sex on the Beach, Long Island Iced Tea, and the Margarita. Cocktail menus aren’t so common here, and if you do find them, you aren’t typically seeing a lot of creativity.

No one’s apologizing for ordering a Piña Colada here, and who should have to END_OF_DOCUMENT_TOKEN_TO_BE_REPLACED

Do you really care how your customer’s day has been?
By LeNell Smothers 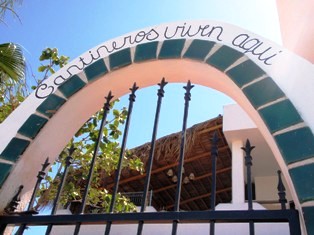 Back when my liquor store LeNell’s Ltd was open in Brooklyn, NY, my staff and I would make frequent jokes about the difference between a salesperson and an order taker. Often the level of unprofessionalism was highest among the big corporate distributor representatives who liked taking your order but not working for a sale. They seemed to think that you needed them and their product more than they needed you. Examples of reps exhibiting order taker behavior include things like talking to us in the store without removing sunglasses, leaving us schwag logo’d with products we had never ordered (aka cleaning out the trunk), mailing monthly deals that had nothing to do with any product we sold, and dropping a price book through the security gate when we were closed.

Back then, I got annoyed with lazy distributor reps who thought that making a sales call simply meant dropping off a price book. Then my fiancé Demián and I opened our bar Casa Cóctel www.casacoctel.com in Baja California Sur, Mexico where something as simple as a price book and some product choice is warmly welcomed. 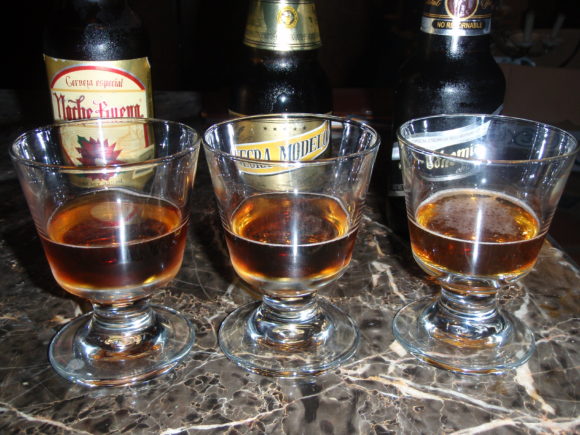 We got our liquor license through the grace of one of the major beer companies that owns quite a few licenses, knowing that this means we can only serve beers from that company’s portfolio. We were told we were not authorized to serve draft beer even after we offered to pay for all the equipment and to pick up the kegs ourselves. The reason we were given was that we were too small for the company to make money off of our draft service. We were also told we could only sell certain beers in the portfolio. It took several weeks of chasing before we were finally informed of what beer brands we could purchase and for what price. END_OF_DOCUMENT_TOKEN_TO_BE_REPLACED