ALL RISE FOR JACQUES PEPIN

The man, the myth,the legend (and the truth about being humble, beloved, and having a sweet tooth)
By Francine Cohen 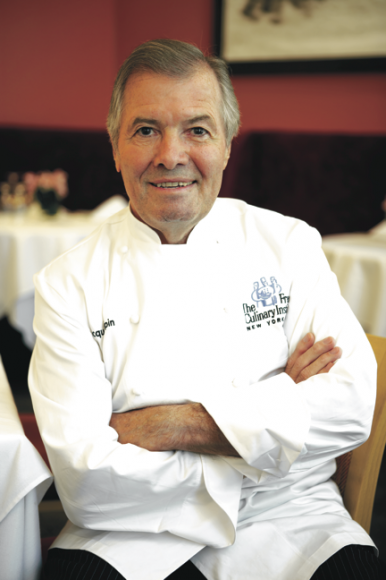 When tickets for the NY Wine & Food Festival went on sale a few months back almost instantaneously some of the most popular events featuring Food Network Stars and industry luminaries were sold out. With prices for most events hovering around just $100 per person or so it’s no wonder; in this age of foodie madness, and the spotlight on celebrity chefsevents like these are a big draw and easily accessible.

Draw as they may, and with no disrespect intended for folks like Giada DeLaurentis, and Bobby Flay and his sold out event popular Tacos & Tequila hosted by Bobby Flay, the real celebrity event for the whole festival was a coveted ticket to the Jacques Pepin tribute dinner on Saturday night.

How could it not be? Pepin has been cooking on television almost as long as DeLaurentis and Flay have been alive, the chefs preparing dinner were a culinary pantheon of who’s who (Daniel Boulud, Alain Ducasse, Laurent Gras, Alain Sailhac, and Jacques Torres), the wines which were provided by Prince Robert of Luxembourg (Pepin’s co-honoree) and his house of Domaine Clarence Dillon, were described by dinner co-chair Roberta Morrell (Morrell & Company) as “absolutely stunning” and Martha Stewart appeared to MC the whole shebang.

Over a leisurely lunch with Chef Pepin over at L’Ecole, the student run restaurant at The French Culinary Institute (www.frenchculinary.com) where he is Dean of Special Programs, he opened up and about the dinner, his career, and his new book (more on that later in our Brain Food column)- Essential Pepin: More Than 700 All-Time Favorites from My Life in Food.

While Pepin graciously pooh-poohed all the hoopla as he says, “They’re just using my birthday as an excuse for this party,” everyone else in attendance (all 450 of them) was thrilled to fete this charming mentor.

Dinner co-chair, and current President of Les Dames d’Escoffier (www.ldny.org) Melanie Young of The Connected Table (www.theconnectedtable.com) shares the sentiment of those who attended and raised $83,00 for Les Dames d’Escoffier’s Make A Difference Scholarship Fund in Pepin’s honor. She remarks, “Jacques is a teacher, mentor and chef who has touched many lives in this industry. He was a dear friend and television collaborator with Julia Child, one of Les Dames d’Escoffier’s “Grand Dames.” His body of work is incredibly impactful and impressive: author of 26 books, host of 11 acclaimed public television series and the highest accolades both here in the U.S.A. and in France.”

She continues, “This October Jacques is releasing one of his most comprehensive books ever, Essential Pepin, which features the best recipes he has created over his 60 -year career. The book is being released in tandem with a 26-episode KQED PBS series of the same name.”

While Pepin was the reason they were all there, he wasn’t the only big name in the house happy to be there. Alain Sailhac had stopped by the table at L’Ecole and to share his excitement for the evening as well as waxing poetic and reveal details about his planned menu (along with a fair bit of ribbing directed Pepin’s way after which Pepin declared themselves just like two of the three Stooges). Sailhac’s excitement was matched by the other chefs who joined him in thethe kitchen that night as Young notes, “All of the chefs were very enthusiastic from the start. After all, what a privilege it is to cook a dinner to honor an industry legend like Jacques Pepin who was chef to three French presidents, has taught and mentored countless chefs and whose cookbooks are considered classics!