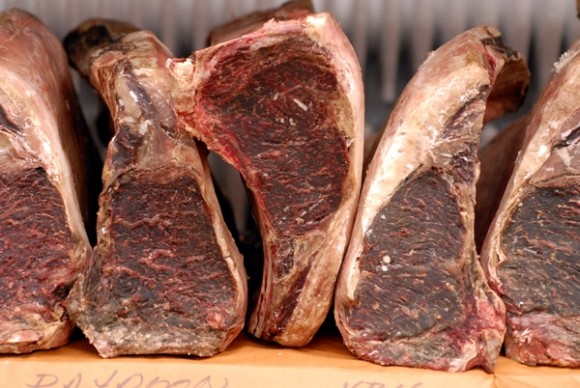 Our national culinary identity is all wrapped up in meat.

Meat has taken on such a prominent role in the American diet that it’s become so ingrained into our national identity that most Americans, when eating a steak or biting into a juicy cheeseburger on any given day of the week don’t give this delicious luxury a second thought.

But it’s worth some consideration as evidenced by the fact that restaurant consultant Clark Wolf recently convened a whole panel of experts to discuss this very topic. Wolf notes, “The drought in Texas causing prices to rise, a greater basis of sustainability in animal practice, a strong interest in community husbandry, and the start of the holiday season make this [American’s consumption of meat] an important timely topic.”

He continues, “In a different economy our iconic protein warrants discussion. Our job is to highlight the many viewpoints not always addressed.

The participants each brought an original perspective to the table, and approached the topic from various angles, making for a very free-form dialogue.

Dr. Marion Nestle, known for her role as a driving force in the food industry, notes that meat consumption is directly related to the economic stability of a country; something that America has enjoyed a lot of over the years. She says, “American steak is here to stay. It’s iconic and you don’t bring down icons.” This is not only true of beef but also of pork. The pig, an animal whose meat is valued for its nutritional value and savory taste, is an iconic American animal as well.

Connecting to American food icons takes many forms. Though pork is not an acceptable meat in the Jewish culinary repertoire, panelist Jeffrey Yoskowitz appreciates the cultural impact the “other white meat” has in American society. He notes that soy pork alternatives have become popular among END_OF_DOCUMENT_TOKEN_TO_BE_REPLACED