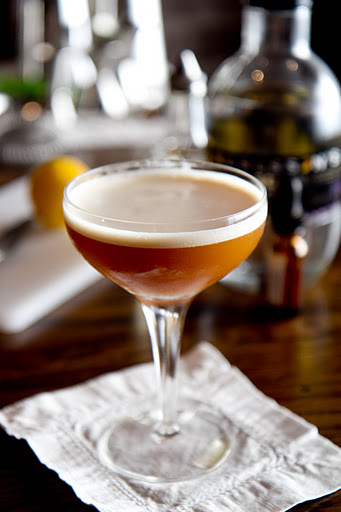 Most publications are busy prognosticating; focused on the year ahead, projecting trends and anticipating the future. But at INSIDE F&B we decided to take a moment before rushing pell-mell into 2012 and invite you to join us in relieving some stress that always comes with looking ahead. Instead, stop and smell the proverbial roses as we take a look back at some of the spirit industry’s best drinks tasted around the world.

The best drink I had all year had to come from one of the more unlikely places in Australia – Katoomba in the Blue Mountians in NSW. Once upon a time it was known as Sydney’s playground – especially during the roaring twenties with Gatsby-like characters parading around in finery. Now the place attracts only a few weekend tourists with its beautiful art deco cafes and hotels remaining for the large part empty and falling into disrepair.

I was up there with my partner for a Valentine’s Day getaway – with February being the middle of summer down under we were expecting swelter. Instead a cool mist hung eerily over the whole town as we walked up the steps of the Carrington Hotel for a pre-prandial tipple. The hotel by the way looks like something out of The Shinning and sure enough during the middle of the week the place was empty and spooky.

We were sat next to a roaring fire in an anteroom next to the grand 1930s ballroom. I was expecting that they might manage a decent G&T but I was pleasantly surprised by the quality of the cocktail offering. I ordered an Old Cuban – an Audrey Saunders masterpiece that had somehow found its way to this country town. My partner had a Bramble – a Dick Bradsell modern classic from London. The drinks were good. Not exceptional. bBut it was the more the fact that in rural Australia I could order drinks created by the best bartenders of London and New York whilst being transported to almost untouched art deco setting. I thought truly cocktail culture has come of age and perhaps one of America’s greatest inventions can be enjoyed at all ends of the earth.

Drinking a Negroni at an outdoor cafe with a beautiful girl and a great friend on the Sardinian coast as the sun set over a Phoenician ruin and a lighthouse. Rather than the 1:1:1 ratio of the drink on its own it was all the elements of the time, place, people and the great drink itself that made it my best drink for 2011.

We were having a meeting at Eau De Vie, going over our recipes and making sure that our techniques were uniform. We mentioned a Bijou (equal parts gin, Dolin and Chartreuse, orange twist and discard) and I made a casual statement that of course it was always stirred. One of our team, Taka Shino, demurred, saying that he always shakes his. Not only was this interesting in terms of discovering an inconsistency but it was also something I’d never entertained for this cocktail. “Well, let’s try them,” I said and we made side-by side identical Bijous, mine stirred and his shaken. When we tasted them I was fairly shocked to discover that I preferred the shaken. It was an excellent reminder that the junior bartender can show the senior bartender something END_OF_DOCUMENT_TOKEN_TO_BE_REPLACED