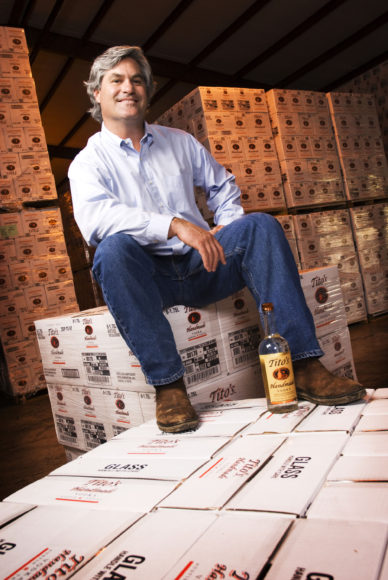 Ask for a vodka in Austin Texas, and invariably you’ll be asked the question, “you want OUR vodka or one from somewhere else?” That question says a lot about Texas, a proud and independent state, and if John McCain hasn’t ruined the term for the rest of us, the place where the word maverick was coined. One of the state’s true mavericks is a laid-back Texas native named Bert “Tito” Beveridge, a former geologist in the oil industry who ditched it all to follow his dream; and that vodka, “our” vodka as they say in Austin, is Tito’s.

Growing up in San Antonio, having a vodka bottle with his name on it was probably the last thing on Tito’s mind. While his interests certainly leaned towards the scientific, distilling is, after all, a science as well as an art, Tito’s original goal in life was to become a doctor. And it was with that in mind that Tito excelled in all things science related in school, eventually enrolling as a pre-med student at Vanderbilt University. However, like so many students, his focus changed as he went through college, and he ended up realizing that his true talent lay in the science of the earth, not the body. So tissue-covered slides and dissecting fetal pigs gave way to seismology and geology, and upon graduation, and armed with his degree, he returned to Texas, Houston to be exact, and entered the oil industry as a seismic data processor for a major oil company.

That time, the 1980’s, was a boom-time for the oil industry, with Texas-based companies expanding into countries all over the world. Tito did well also, eventually getting coveted contracts to work throughout the global oil fields and spending large blocks of time in countries like Venezuela and Columbia doing those things that energy geophysicists do, like sub-surface mapping and dynamite-blasting oil reserves.

However, he also had that classic Texas streak of independence running through his veins, and after a few years on the road, he tired of it and returned to his home state, settling in a town called Alvin; a place he calls “a hotbed of KKK activity” where he was actually invited to Klan meetings (which he politely declined).

It was in Alvin that he hung out his own shingle, becoming a wildcatter (an independent oilman, for those of you who haven’t seen the classic James Dean/Rock Hudson/Elizabeth Taylor movie, Giant) and starting his own drilling company. While drilling was a good way to make a living, he didn’t love it, and soon was back on the road again, eventually ending up in Austin working on environmental projects and finally, once he’d had enough of the Oil business for good, as a mortgage broker.

But going from blowing up mountains to moving mountains of paperwork, also seemed unappealing after awhile, and by the early 1990’s, Tito, who by that time had started infusing bottles of store-bought vodka and giving it to friends in his spare time, was at a crossroads, wondering what made him happy, and what to do with his life that would have meaning. So, after a quick trip to the backside of Maui, where he spent four days camping at the Seven Sacred Pools, reflecting on, to quote the great author Douglas Adams, “Life, The Universe, and Everything” (RIP Douglas, I had to do it…), Tito returned to Austin, and, after attending a keg party where someone recognized him as “that vodka guy” while he was filling his cup at the tap, returned home that evening thinking that maybe he should look into the spirits industry.

As fate would have it, late that night on television, he saw a program featuring some Tony Roberts type guy, who said the following words, “If you want to find your dream job, find your passion. Then sit down with a pen and paper, draw a line down the middle of the page, and on the left make a list everything you love to do, then on the right, write down what you are good at doing. Once you’ve done that, find what you’re best suited for, and make it happen.” Well, Tito grabbed a pen and paper and did just that…why not? He’d just come home from a keg party, and it was the middle of the night? No harm, right? END_OF_DOCUMENT_TOKEN_TO_BE_REPLACED