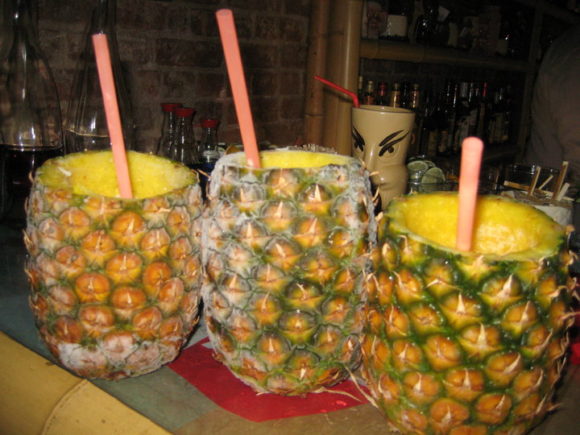 Despite Herculean efforts by the champions of our industry to herald and preserve the classic cocktail, many of us have grown weary of seeing these drinks made poorly by those who would take shortcuts by using inferior ingredients and mediocre techniques. The rediscovery and advancement of some of the methods used to master the service of pre and post-Prohibition era classics have opened our eyes to the fact that it is imperative that we revisit the past in order to improve our collective future behind the bar. That having been said, it would appear that we are now respectfully looking beyond the punch bowls and coupes of the saloons and speakeasies, where we cut our teeth, and looking towards the sandy shores of a forgotten cocktail paradise. A renaissance of the Tiki/Tropical cocktail movement is clearly upon us, and Painkiller is eager to participate and contribute.

Over the past 30 years, the Piña Colada has been relegated to a dismal life of careless preparation using pre-packaged artificial mixes and low quality spirits. Many establishments have settled for simply churning out frozen “cocktails” en masse from poorly calibrated machines. For the majority of the cocktail world, the art of frozen drink making has been rendered moot—hence the modern bartender’s reluctance to embrace the blender as a valuable tool behind their bar. This is clearly not the case at Painkiller, and we hope to open the eyes of our peers to the infinite possibilities inherent in the use of blenders in our cocktail program.

The pairing of rum, pineapple, and cream of coconut in a cocktail has proven to be a formidable marriage. During our initial research into the world of Tiki and frozen cocktails, we chose to embark on a trip that would take us to many of the most venerated outposts of tropical bar culture around the world. Our first stop was not a place that is particularly known for its strong ties to Tiki. However San Juan, Puerto Rico was an obvious destination for anyone with the intention of understanding the origins of the frozen cocktail. At Dutch Kills, we do not make frozen cocktails. We only use our blender (a Waring two-speed model 702 from the 1950’s) during the preparation of our house-made orgeat, and it does not have a home on the back bar. Due to our lack of familiarity and experience with frozen drinks, we considered purchasing commercial grade frozen margarita machines and instant blenders. Those ideas were immediately abandoned at the airport in Puerto Rico when it became apparent to us that we would not be respecting our pedigree should we have opted to take the easy way out with the devices that we saw in use there.

We are firm believers that the capabilities of certain bars can be measured solely by the quality of one or two drinks from their repertoire. In other words, if a Cuban themed bar produces a lousy Mojito or a pre-Prohibition style bar makes a horrible Sazerac, you can rest assured that said bars might then be justifiably placed under suspicion for such acts of cocktail malpractice. Certain drinks are standards. Great examples of this rule are the Daiquiri, the Old Fashioned, and the Manhattan. All of these cocktails have just three ingredients and require very little preparation. However, to prepare these properly requires a great deal of experience. A Daiquiri in Havana can be as much of a barometer for indicating excellence in service as can be a Manhattan in Manhattan. At Painkiller, the standard frozen drink is the Piña Colada. If you can master the execution of this drink, then you can properly make all of the frozen drinks on the menu with little variation.

CHECK BACK TOMORROW FOR PART TWO OF THIS THREE PART ODE TO FROZEN GOODNESS: http://insidefandb.com/2010/06/if-you-love-pina-coladas-%e2%80%93-part-two/