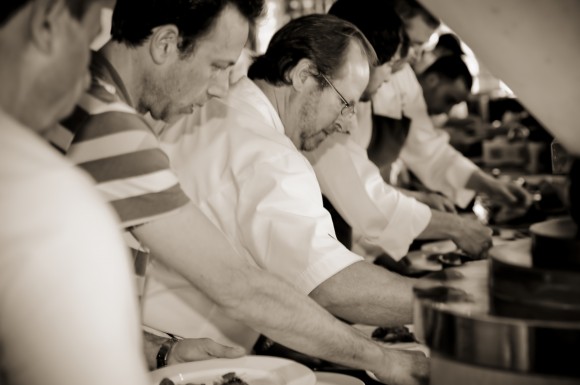 Ranked number one on “America’s 100 Greatest Public Courses” list by Golf Digest, Pebble Beach is world famous for its golf. What most people don’t know is that Monterey County is one of the most important agricultural regions in the world. The Pebble Beach Food & Wine festival, in its third year, is sure to help change that.

Monterey County is also home to 39,300 acres of wine grapes and about 75 wineries and growers. It, and neighboring San Benito county together, account for 8.4 percent of the total state wine grape crush, as well.

With arid mountain ranges plunging thousands of feet into the most biologically diverse marine ecosystem in the world, the coastlines of Monterey County are some of the most aesthetically pleasing anywhere. The biological diversity means a wide variety of seafood is available year-round, and the minimal population means little to no pollution, ensuring the freshest, cleanest seafood around. 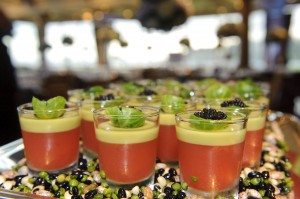 The freshest produce, ample supplies of amazing wine, abundant access to seafood and one of the most aesthetically pleasing natural environments in the world ensure that Pebble Beach Food & Wine (PBFW) will continue to grow into one of the greatest food & wine festivals around. Already, in only its third year, almost every celebrity chef one could imagine was participating.

To see a list of all the chefs with complete bios on each, you can visit http://www.pebblebeachfoodandwine.com/ With all the celebrity chefs, almost without exception the food was complex and full-flavored, but one dish in particular really stood out. Tyler Florence’s basil-fed escargot was fit for a king, and the recipe and story behind them was even more interesting. Fed nothing but basil for their entire lives, these snails were farmed specifically for this dish. Even with no basil in the recipe the taste of the aromatic herb came through, proof positive that you are what you eat!

For me, as a person who was working the event, the biggest story is what most of the attendees didn’t see: what was happening behind the enormous carpeted tents. Six big rig trailers opened up to two flatbeds to serve as temporary storage for the tons of fresh produce, meats, beverages, and various other supplies. Swarms of golf cart trucks circled the facility loading and unloading workers and ingredients. White coats were everywhere—manning a quarter of a city block’s worth of barbecue grills—chopping, slicing, stacking, boiling, blanching, baking… the white coats and checkered pants filled the periphery in every direction. Security guards stood post at every entrance to the marvel to make sure no unauthorized person could get in the way as volunteers ran full trays of food out and empty ones back. The nearly 3500 people who congregated to taste these chef’s wares couldn’t see any of this, and being able to witness the spectacle was an honor and a privilege.

In a former life I was a boatswain’s mate in the Navy; and part of my initial duty was to work mess. Stationed on a ship with over 4,000 sailors and marines on board meant that three times a day the galley had to crank out enough food to feed them all. One would think that doing it three times a day would affect an enormous amount of efficiency, and one would be correct. The age-old adage “Love is the most important ingredient” has never rung more true than here, however, as all of the workers in the makeshift kitchen behind the tasting tents at PBFW put those military mess chefs to shame. 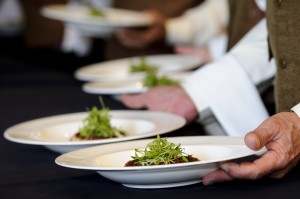 The speed, accuracy, efficiency, and quality of end product so greatly surpassed anything that I ever saw in my three months of mess duty in the Navy that I was truly dumbfounded. Even my work for some of the best catering companies in California couldn’t compare. The passion that the PBFW crew shared and the competitive spirit of these celebrity chef’s teams was unlike anything I have ever experienced. During my catering days I had to opportunity to work with several of these chefs before, so what I saw at PBFW can only be explained with an analogy. Just as playing tennis with someone much better will improve a person’s game, so, too, apparently will cooking alongside other teams that are admired. In over twenty years in hospitality, I have never seen a more beautiful operation.

The sad part of all of this is that once again, my experience has reached another benchmark that will limit most operations’ ability to impress me. I’ll always be able to say, “This is pretty amazing, but it’s no Pebble Beach.”