It’s Good For You
By Abigail Gullo 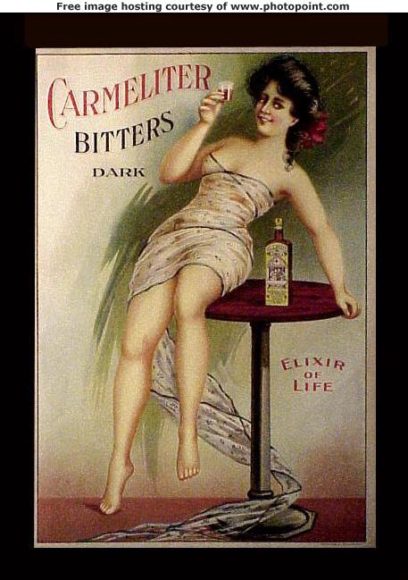 Maybe those college kids doing shots of Jägermeister aren’t so stupid after all
(www.jagermeister.com). They might actually be onto something (though possibly going about it in the wrong way) – and that something is appreciating the restorative qualities that Amaros and bitters like Averna (www.avernausa.com), Jägermeister, Fernet (www.fernetbranca.com), and Underberg (www.underberg.com) all offer.

We have all downed these bitter drinks in a hurry, rushing to get it to our belly, hoping it will do some good…or maybe bad. But, after sitting through the recent Tales of the Cocktail (www.talesofthecocktail.com) seminar A Shot of Black Stuff – Amazing Amaros and Brilliant Bitters, to see if these traditional medicinal bitters had any positive pharmaceutical value, I think I’ve concluded that the answer is “yes.”

The traditional boundaries of Tales of the Cocktail seminars were stretched for the first time this year as due to the ever-growing popularity of the event it had to expand outside the confines of the Hotel Monteleone (www.hotelmonteleone.com). Just one block away, the ballrooms of the Royal Sonesta Hotel (www.sonesta.com/royalneworleans/) on Bourbon Street were put to good use for an overflow of cocktail geekery and knowledge gathering. The ballrooms at the Royal Sonesta were refreshingly easy to find, compared to the labyrinth of the Monteleone, and sitting in the coffee shop across the hall I found two Germans waiting for the seminar to start.

Stephan Berg and Alexander Hauck, founders of The Bitter Truth (www.the-bitter-truth.com), have advanced the field of bitters with their exhaustive research and newly released line of classic style bitters. Berg, who has a massive collection of bitters from the last two centuries and has done painstaking research to fine original bitter recipes and Hauck, who spoke of his passion for fine ingredients that are all natural for pure flavor, sponsored the seminar, along with Imbibe Magazine (www.imbibemagazine.com), Luxardo (www.luxardo.it) and Averna to expose the myths and mythology behind this mysterious category that claims to have gotten its start as an herbal medicinal tonic that could cure many ills.

The spirited ringmasters for this magical mystery tour of Amari and bitters were Jacob Briars and Sebastian Reaburn. Briars, from New Zealand, introduced himself as a child of hippies who still has yet to even take an aspirin. He relies on herbal remedies for all his medicinal needs. Reaburn, from Australia, introduced his own “Koala Tonic” and promised it could cure everything from impotence to cancer. Knowing a bit about the history of these “Snake Oil” salesmen, I declined to taste his tonic, which ended up being a noxious mixture of Listerine, gin, cough syrup and other nasty ingredients.

This tonic was followed up by a delightful introduction which encapsulated the long and complicated history of Amaro and bitters in our cocktail kingdom. As with many potables that end up developing a dubious reputation, the free market ran wild with these bitters in the 17th-19th century and what was essentially a good product became hazardous and even deadly in the wrong hands. All this ended quite suddenly in the United States with the passing of the Pure Food and Drugs act in 1906, putting an end to false and outrageous claims and to many bitters manufacturers. In 1919 Prohibition in the US put the final nail in the bitters coffin and only now, nearly a century later, are bitters making a comeback.

Bitters may just be seeing the light of day again but the sweet Amari have always been with us, and thrived in Europe during all this time. In tasting glasses before us were samples from 6 different kinds of Amari that could be identified by their main source of flavor: peels, spices, herbs, fruits and vegetables, and flowers. Though separated into categories for our tasting purposes it was made clear that many use all of these ingredients. Most Amari contain at least 15 different ingredients, and sometimes more than 50. And rhubarb seems to be the golden thread that can be found in almost all of them.

Following are my tasting notes from the 6 glasses of deliciousness that were put before me:

Carpano: Raisin, bitter, herbal. This is my favorite sweet vermouth to put in a Manhattan so I recognized it right away. I could drink this on the rocks.

Averna: Citrus, sweeter and minty fresh. On a second tasting a lot of coffee notes came out too. This Amaro was created in Sicily in 1868. This is what my Great Great Grandfather Gullo probably drank before he got a boat to come to New York.

Luxardo Amaro: Spicy, cardamom and even more spicy on the second tasting. This Amaro is from Northern Italy and would be great with coffee. I am going to try to work this into a coffee cocktail at Fort Defiance.

The Bitter Truth Elixir: Very yum, with cinnamon, sage, rhubarb and lemon verbena. Full with amazing balance and a light sweet menthol touch. Created by Stephan Berg and Alexander Hauck in 2009, this is the newest Amaro we tasted. It is produced by Dolin in France and uses between 20-50 herbs. See? Bitters makers still keep secrets! In fact, they are having trouble getting this distributed in the US due to the name; too similar to medicine. They will try to get it passed again under the name Elixer.

Fernet Branca: Menthol burn! Saffron, peppermint. This darling of the bartender community has been blowing up the scene lately. Fernet was once recommended for “Woman’s Complaints.” Really? It could put the toilet seat down and call you the next day? Nice. I was going to create a cocktail for Tales called the Gold Bond using the Fernet Mentha.

Braulio: Sweet, mellow, chamomile, lavender. This beautiful creation is nearly impossible to get in the United States. Created in Bormio, Valtellina by Francesco Peloni, this Amaro uses traditional herbs and flowers sourced from the Stelvio National Park. They have beautiful names like Meadowsweet, gentian, saxifrage and tea mountain flower. Sipping this just put me on a pastoral Italian mountainside. LeSigh!

We were also treated to a homemade concoction that Briars swears by – a Reish Mushroom bitter. Reaburn called it, “I Can’t Believe It’s Not Truffle Bitter.” Briars says that, when prepared correctly, this little mushroom is an anti-inflammatory cancer and cholesterol fighting antioxidant that can also keep you revitalized and regular. To keep it palatable he uses Reish Mushroom extract, Mushroom puree, vodka (vodka delivers the key ingredients better than water or sugar) and cinnamon. It was not bad. But I was happy to follow it with a fresh beet juice cocktail.

See? The bitter stuff can be good for you. Just don’t listen to the salesman with the thick Aussie accent.