A PAMA Party Guaranteed to Lift Your Spirits 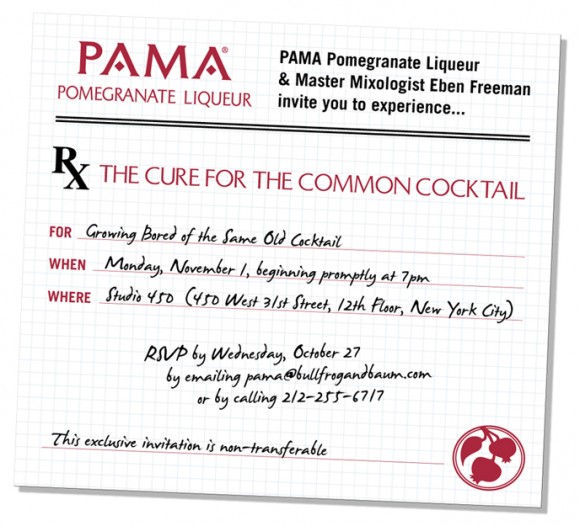 It’s that time of year – the weather swings like a pendulum on the bow of a boat riding the choppy seas and inevitably we all get colds. You could go to the doctor, get a prescription and then hit your favorite cocktail bar to wash down the meds, but that’s not a good idea (really not reflective of the whole “drink responsibly” mandate we follow). Better to self medicate simply with cocktails while learning about cocktails. 21 of them in fact. And created by Eben Freeman no less.

On Monday, November 1st Eben Freeman is presenting a selection of cocktails made with PAMA, the pomegranate liqueur that’s a combination of pomegranate juice (a known antioxidant), vodka and a touch of tequila. Exploring the realms of cocktail’s flavors, colors and textures Freeman is introducing a number of signature recipes that show off PAMA’s versatility and value in enhancing a drink.

Among Freeman’s cocktails, PAMA was paired with bourbon, rye, tequila, cognac, brandy, dark and light rum, cachaça and vodka, creating an array of classic and modern drinks. He says, “PAMA is so well balanced between sweet and tart that it balances the strength of its partner spirit,” When compared to similar liqueurs and cocktail ingredients, PAMA’s sweetness is 42 on a 100-point scale; its tartness reaches 39.

Pomegranate has a long history in the cocktail spectrum – originally in the form of grenadine, which was once made with fresh pomegranate juice. According to Freeman, it is the pomegranate that gives PAMA a tannic quality that helps to structure a cocktail and impart texture, which enhances the end result. He concludes, “When used properly, PAMA can help introduce the novice drinker to the realm of the classic cocktails with a fresher, more approachable flavor; its ruby-red color furthers to brighten a cocktail with a rosey hue that makes the drink more appealing to the eye and subsequently the palate as well.”

If you want to get well, or maybe just have PAMA in the well and figure out what you can do with it, get yourself to this event. The first three people to respond to francinecohen@insidefandb.com with the right answer about what’s in PAMA (besides pomegranate juice) will be put on the guest list.