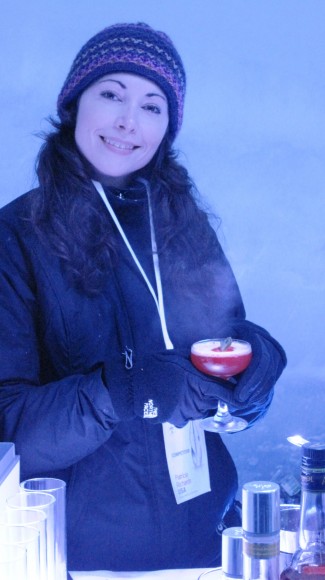 Forget complaining how cold you’ve been this winter; you’ve got nothing to say until you walk in Patricia Richards’ shoes. Last week this competitive Las Vegas based bartender gave up the warm desert winds for the chillier breeze blowing through the Arctic Circle as she headed back to Finland to represent the United States for a second time in the Annual International Finlandia Vodka Cup Finals.

Richards is a stickler for a great drink and we think she might be a stickler for punishment too as she geared up for another return to the site where shaking and ice dilution take on a whole new meaning. Despite the cold Richards was excited about this opportunity as she said, “Well, for one thing, I feel like the luckiest girl in the world! How cool is it to be able to represent your country, not once, but two years in a row in this international event!!! It is a tremendous honor indeed! I think that my recipes are even better this year, truly showcasing the beautiful flavors of Finlandia vodka. I feel excited and honored to be a part of this 13th annual Finlandia World Cup.”

Richards brought honor to the US last year by placing fourth overall in the competition, the best U.S. finish in the history of the competition’s 12 year history.

“It is very exciting to be taking Ms. Richards back to Finland to compete in the Finals,” said Nick Nelson, U.S. brand manager for Finlandia Vodka. “Her top-five finish last year was the best the U.S. has ever done in the Finals, and we have high hopes she will win this year.”

To compete in the qualifier, U.S. bartenders had to submit drink recipes online to the United States Bartender’s Guild for an aperitif and long drink. The submissions were reviewed by a panel of judges that included members of the USBG, Finlandia Vodka and Tony Abou-Ganim, world-renowned mixologist and USBG National Ambassador, and narrowed to the top-ten competitors. The panel then re-created the drinks of the top competitors and scored each on the aroma, appearance and taste. Once the points from each separate drink category were tallied, and Richards once again prevailed.

Richards’ trip to Finland pitted her against 33 bartenders from around the globe based on the art, style and craft of their original Finlandia cocktails and the final category of the contest, the “Quick Mix”, an Iron Chef-style category. In the “Quick Mix”, bartenders must create a recipe based on mystery ingredients within 10 minutes. This category tests the skills of even the best mixologist. To practice for the Quick Mix, Richards attended a refresher training with Tony Abou-Ganim in Vegas in January.

“Patricia is a very talented mixologist who continually rises to the top,” said Abou-Ganim. “She demonstrated her abilities last year with her fourth place finish in the Finals. I am sure she will once again represent herself, the USBG, and all U.S. bartenders well in the Finals and hopefully will bring home the Cup to the U.S. this year.”

UP YOUR CHECK AVERAGES WITH SAINTLY & SATISFYING SUPER BOWL DINING