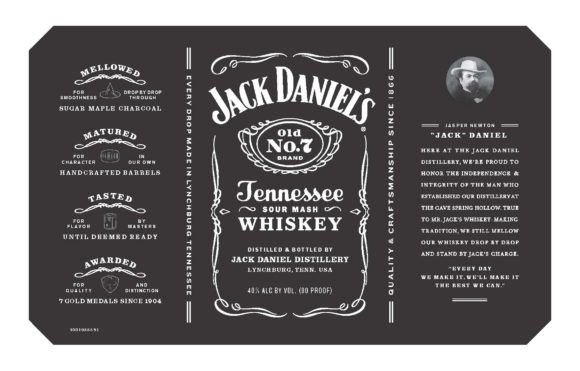 Taking it one step further this week is some very thoughtful input from one of our favorite Los Angeles based contributors, Eric Tecosky (of Jones Hollywood and Dirty Sue Olive Juice fame –www.dirtysue.com, and a recent judge in the Macchu Pisco Centennial Pisco Sour Competition – www.macchupisco.com).

In a world where icons like Coca-Cola and Tony the Tiger resonate as impactfully as being able to spot your favorite brand across a crowded bar, Tecosky takes to task (in a most polite way) the dear folks at Brown-Forman (www.brown-forman.com) who, suddenly, seem to feel the need to mess with one of the liquor industry’s most enduring and visible icons; the Jack Daniel’s label. Though we’ve been assured by the distillery that the juice in the bottle hasn’t changed (phew!), the visible representation of what Jack Daniel’s represents is now, according to the brand, more streamlined.

Brilliant marketing strategy that’s going to boost sales or foolish, grasping-at-straws for market share visual travesty? See what Tecosky has to say about it and let us know if you agree. Or not.

Dear Someone with a sense of reality at Brown-Forman,

I write to you with a severe case of overwhelming sadness. A cultural icon has died. That icon has been with the world for many years and has touched millions across the globe. That icon has dined with some of the most influential people in all walks of life. That icon has shared the stage with legends in the entertainment business and at the same time has brought joy to regular people like you and me. That icon was the bottle of Jack Daniel’s. How did that icon die? Where did it go? These are questions that I have been asking myself since I ripped open a case of the “new” Jack Daniel’s.

Why the new bottle design and label? If I had to make a guess, here goes…I can only assume that some high paid marketing exec was looking for a way to shine and started an inner office campaign to “hip” up the image of Jack Daniel’s. Once that train left the station with everyone on board, there was no turning back. High-fives were exchanged, photo shoots were scheduled, corporate dinners were booked – “people will be amazed when they see how we have made Jack Daniel’s cool again.”

Now, I don’t want to judge too harshly or point fingers at anyone, instead, I offer you this – The New Coke. In 1985 Coca-Cola scrapped their flagship brand due to lost market share to Pepsi and launched, The New Coke. New formula, better taste, blah, blah, blah. Consumers were up in arms and after a couple years of trying to make it work, they went back to “classic’ coke.

Forgetting that it failed for a second, let’s look at why it failed. Coke was a cultural icon. The world grew up with it and trusted it. Sure, maybe sales were lagging at that time, but it was not because Coke didn’t taste they way it should, it was because Pepsi was being more aggressive in product placement – supermarkets, restaurants, etc. The answer should’ve been, “let’s analyze what is not working and fix the problem.” Instead, they took an extreme approach and fell flat on their face. History should be the teacher to every brand facing similar predicaments.

I don’t work for Brown-Forman, so I am not privy to meetings, strategy sessions, etc. but, as a reasonably educated, business minded individual, I can offer with confidence that whatever was the spark that ignited the flame which resulted in the new packaging should’ve been met with an extinguisher immediately.
Instead, I would have looked at why you thought you needed a change to begin with. Sales? Demographic? Competition? Maybe your distributors have the attitude of “Jack sells itself,” and they focused more on other brands. Maybe your internal strategy wasn’t focusing on new whiskey drinkers or converting people from competing brands. Whatever the impetus was, believe me – new packaging is not the answer. Everyone knows the old adage, “If it ain’t broke, don’t fix it.”

Well I offer you a new adage, “If it ain’t broke and it kicks ass, the problem lies somewhere else.” Change like this is reckless and unnecessary. It reeks of someone pushing a new idea through to divert attention away from something they were unable to remedy.

In a shrinking world, lines are muddled and identities are lost. We must hold onto the few emblems of a disappearing era. Jack Daniel’s is one of those emblems. A true icon of America, and the world as a whole. Jack Daniel’s has achieved something that few brands have ever done. That achievement should be held onto for dear life, and not abandoned for something new, just for the sake of something new.

Finally, I offer you Frank Sinatra; another true icon beloved by the world. Frank Sinatra defined cool. He defined generations. He inspired millions and continues to bring joy to the world, years after he’s been gone. There was a point in his career when his big band sound and crooning voice was being taken over by rock and roll. Record sales were down, huge concerts were a thing of the past and it looked like Frank Sinatra was going to be a memory. Music that your parents listened to.

What did Frank Sinatra do? Did he make a big change? Did he learn the electric guitar and start growing out his hair? Did he introduce to the world the “new” Frank Sinatra? No. He did none of those things. Frank Sinatra did what he did best and kept on doing it. But he expanded the way he did it. He always did movies, but instead of cute singing and dancing roles, he took on some real roles. And for that he won an Oscar. He always did shows, but instead of running around the country he took his act to Vegas. And for that, The Rat Pack was born. Frank Sinatra didn’t change his image, he just figured out a way to expose his image to the world again. And it worked. And what did he stock in his bar at all times? Jack Daniel’s.

In conclusion, I urge you to reconsider the change. Actually, don’t reconsider, just go back to the way things were. You got it right the first time. 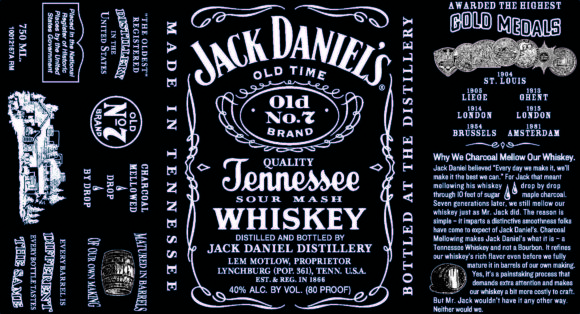