This year at Tales of the Cocktail (www.talesofthecocktail.com) there was so much knowledge and fun flying around between the plethora of seminars on everything from ice programs, to rotovapped scotch (www.theglenlivet.com), brand ambassador roles, effective menu design and all the great parties (Thank you Charlotte Voisey and Miguel Calvo for taking us back to the 1940s with your William Grant Portfolio Shore Leave party www.grantusa.com)

Of course, when it comes to fun, it would be impossible to leave out the week’s big fundraiser, Pig & Punch, which was created by the Bon Vivants (www.bonvivants-sf.com) and raised $6,000 for Kingsley House (www.kingsleyhouse.org). The rain couldn’t dampen anyone’s joy about being there.

But one less than joyful refrain was heard again and again; overheard at the pool, in passing in the Hotel Monteleone’s lobby (www.hotelmonteleone.com), and late at night whispered in the doorway of the Alibi…word on the street was a plea for a return to bartending and all that that encompasses- in short a shift towards the mindset that service is king and elitism is out.

Two well spoken and seasoned bartenders made this the topic of their columns in the esteemed publications to which they regularly contribute. On the left side of the country, in Denver’s Westword.com Sean Kenyon opined about titles on business cards and what they really should represent. On the right, on Serious Eats.com Michael Neff had a few choice words to say about bartenders after being inspired by his daily interaction with the busy bartender at Acme (www.acmeoyster.com).

You can read all about it here: 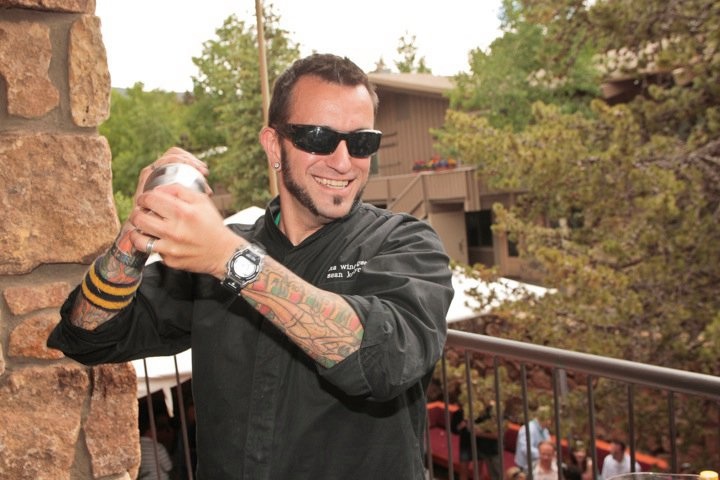 Behind the Bar
Sean Kenyon knows how to pour out both drinks and advice. A third-generation bar man with 25 years behind the bar, he is a student of cocktail history, a United States Bartenders Guild-certified Spirits Professional and a BAR Ready graduate of the prestigious Beverage Alcohol Resource Program. You can often find him behind the bar at Euclid Hall (www.euclidhall.com) and here most weeks, where he’ll answer your questions.

I just returned from Tales of the Cocktail in New Orleans, the biggest cocktail party/bartending/spirits convention in the world. While looking through the stacks of business cards I collected, I found the following lofty titles for bartenders: Mixologist, Master Mixologist, Master Bartender (says who?), Cocktail Chef, Liquid Chef, Craft Cocktail Specialist, Cocktailian, Cocktail Artist…
All just fancier names for one job. Bartender.

My father — who, in fact, is a bartender — used to say, “A title and a quarter will get you a pack of bubblegum.” Gum is a bit more expensive now, but you get the point…

Let’s talk about the most-often-used title, Mixologist. Created in the mid-1800s as a humorous reference to bartenders, it was meant to be tongue-in-cheek then — but now is embraced as a “serious” title by many (too serious) bartenders world-wide. As evidenced by the many fancy titles that PWPDs (people who pour drinks) around the world use, it seems they want to distinguish themselves from the everyday bartender. Why?

Granted, I’ve been referred to as a mixologist many times. People, mostly writers, want to find a different way to refer to me so that I don’t get lumped in with all the other types of bartenders — nightclub drink slingers, dive and & neighborhood barkeeps, flair bartenders, etc. The problem is, I don’t want to be separated from them. I have respect for what they all do, and have been there as well. Great club bartenders (watch Ben Vencil at Tavern Downtown) can efficiently serve hundreds of people in an hour and thousands per shift. A good dive or neighborhood bartender can remember drinks, take care of their guests and hold a conversation about anything. Flair bartenders entertain a crowd. I am proud to be lumped in with these groups.

Obviously, there are differences amongst bartenders. Some of us work with the tools we are given at our jobs, and do the best with what we have. Some of us are lucky enough to work where we can practice craft bartending. Those of us who are so blessed have worked hard to take our art form back to where it was before the dark ages of bartending (the 70s through the 90s). During these dark times, aka the age of convenience, bars started replacing fresh juices with powdered mixes, high-end spirits with cheaper quality hooch, real sugar in bottled sodas with high fructose corn syrup sodas on a gun, etc. This was also an age where every drink was shaken (even those that should have been stirred), because speed was the key. The term “Martini” became a blanket for everything served in a V-shaped glass.
There is now a huge, bright shining light at the end of the tunnel. We are slowly returning to where we began, when bartending was a well-respected profession. In the past ten years or so, our craft has grown in leaps and bounds. There are now many more resources for bartender education available than ever before.
So those of us who have worked hard to restore respect to our craft now need to embrace the term “bartender,” rather than try to separate ourselves from the herd. We need to be part of the community. Rather than belittling our brethren who are not as learned or fortunate, we should spread the gospel: Hospitality (always first), fresh ingredients, quality spirits, proper technique.

Call yourself what you want, but be a bartender first. 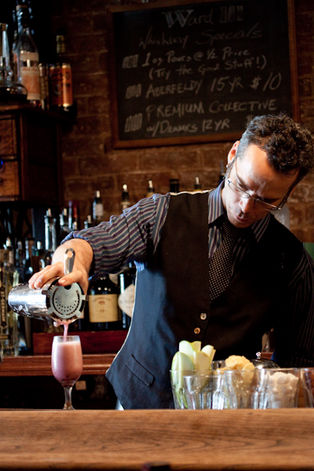 New Orleans is a beautiful city, and I was lucky enough to spend a few days there recently. I was traveling on business, but since I work in a bar, that business involved cocktails. For those of you who haven’t heard of it, Tales of the Cocktail is an annual bacchanal/convention that brings together people from all over the world to learn about, sample, discuss, and generally celebrate spirits and how we use them.

The event is headquartered at the storied Hotel Monteleone, which is conveniently located around the corner from a much earthier establishment, Acme Oyster House. Their specialty (besides oysters, obviously) is a massively decadent po’ boy sandwich called The Peace Maker. While my nights were occupied walking the streets drinking Abita Amber from a plastic cup, each day started sitting at the Acme Bar and fortifying myself with fried shrimp and oysters on a roll. Yes, I want tartar sauce. Of course, I’ll take the coleslaw. Absolutely, I’d like to wash that down with a cold beer.

The French Quarter was overrun with cocktail-types for five days, to the delight and chagrin of actual working bartenders who operated the establishments we all would frequent. Delight, because bartenders are famous for being generous tippers, and can often be compassionate customers. Chagrin, because we can also be royal pains-in-the-ass if things aren’t going the way we think they should. The last thing any bartender on the planet needs to do is instruct a New Orleans bartender in the making of a proper Sazerac, but I saw it happen. The consequences were amusing for me, but embarrassing for the poor sap who thought to open his mouth. C’est la vie.

Of the bartenders I met working in The Big Easy, the man behind the bar at the Acme was by far the most impressive. Big and burly, with waist-long dreadlocks, he poured beers (often), made cocktails (occasionally), served up food (constantly), and ran an incredibly tight ship while keeping his cool, and making sure everyone had exactly what they needed.

What sold me was how he presented the check. He would look his guest in the eye, shake their hand, and say, “Y’all come back and see us any time.” On my second visit, he said, “I’ll see you back here tomorrow, right?” And he was right. I went back every day, in no small part due to the experience I had watching him work his bar.

What most people call lunch, I call breakfast, and it’s a meal I tend to prefer alone. As I enjoyed my day’s fortification, I had plenty of time to reflect. At the exact same time our fancy New York cocktail bars were being nominated for awards celebrating how awesome we are, this man was working his own brand of magic, brilliantly demonstrating that many of us miss the point.

This is unfortunate for cocktail makers and imbibers alike. I love making cocktails as much as I love drinking them, but their creation is not my primary job. The first purpose of every bar, cocktail or otherwise, is to provide an enjoyable experience for our guests. It starts and end with hospitality. Period.

We forget that to our detriment. The cocktail has been elevated to culinary heights, which is a wonderful thing for all of us. The problem arises when they are elevated past the level of those who drink them. I am lucky to have trained many people who will go off in to the world to be fantastic bartenders. This process takes years sometimes, and the last thing I ever talk about is how to make cocktails. Compared to consistently delivering genuine hospitality to every single guest who walks in the door, day after day, making cocktails is a piece of cake.

My trip was illuminating. I tasted new spirits, compared notes with fellow travellers, and generally immersed myself in the collective culture of cocktails in this country. The best thing, though, was watching the bartender at The Acme. He reminded me that the bar for true hospitality is set very high, and I am grateful for the reminder. Hopefully, everyone else was paying attention as well.

What do you think about the mindset of many bartenders today? Let us know.

***Both articles reprinted with permission. Many thanks to Serious Eats and Westword for sharing content.