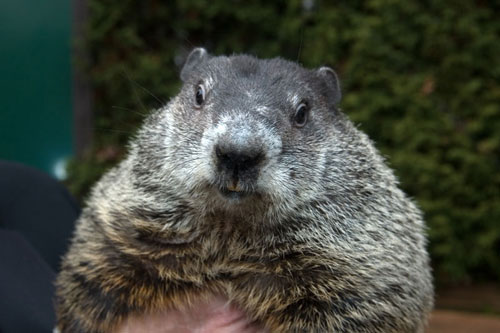 We survived another January. Including those post holiday credit card bills. Enough of the resolution nonsense. Let’s face it, if you don’t do something daily, well then you just ain’t doing it. So as sure as it is chilliest before dawn and the sun rises in the east, I figured it was time to reflect a little from the shivering street.

Let’s assess a few trends past, present and future. Some may induce déjà vu and even cause a shadow from the past to project on the future.

For that reason, I dub this the Punxsutawney Phil Shadow Trend Report. Here’s a fresh Groundhog’s Day morning baker’s dozen (plus one for the shadow):

Line extensions are petering out.
We may look back and realize it was Cookie Dough flavored vodka that broke the buyer’s back. Or not. Wondering- Is a jelly donut flavored vodka far behind? Savvy buyers will start cutting back on extended items. They’ll begin actively curating their spirits collections. Especially white goods. To curate is survive. Even thrive.

Mentoring is the new process to market.
Smart folks like Julie Reiner have been doing it for years. You mentor for the long haul. The old apprentice system actually works. Ambassadors, especially those who unfortunately float from brand to brand, take note.

Quality brown spirits will return to their respected mainstream helm.
It is already a mixed drink with those wood goodies in there. Barrel aged from day one if the color is authentic. Coming up behind them, the flavor-rich white goods, like quality agricole rhums and spicy agave spirits, will thrive as the next wave of drinkers’ palates mature.

There will be a full shakeout in craft spirits as there was in the first wave of craft breweries a few decades back.
Putting out a marginal product in a cool little boutique bottle won’t cut it anymore. Better locally produced spirits at sweet spot price points (like $19.99 retail per liter) will re-emerge and dominate local business. Local distillery pubs offering farm to table food to accompany farm to table spirits will become the trend. Tito, you were a visionary. And I will personally ride my bike down to Austin and kick your ass if you even think about launching a flavor. Plus, I will charge you for the service.

A Fourth Tier will emerge for craft spirits.
This will make it easier for them to bypass the big guys and the stranglehold of local distributors’ ignorance and arrogance. Craft spirits will cast its own strong, organically built natural shadow.

Box stores will sell limited SKUS and dominate their sales.
A savvy off-premise retailer will learn, and again master, the craft of the hand sell on items those big
20, 000+ sq ft guys and supermarkets simply don’t carry. And probably make margin on same for doing so.

On Premise: Building bonds with customers is the new paradigm for repeat business.
Peter Xavier Kelly (Xavier’s, X2O, X, et al) has been practicing the same loyalty building business masterfully up in the Hudson Valley through thick and thin. The internet and social media can only stoke the real relationship. Not create one. That happens in person. And not facing a screen.

Bartending comes back to earth.
It’s the end of the 12 ingredient cocktail with its garnishes and pretensions.

Good things come in small packages.
Cocktail lists will get a lot shorter, easier to read in the dark, also better curated and respond to customers tastes and even whims. Think chalkboard. (Death & Company, you still rule at the other pole. Maybe trademark and copyright that Book of Kell’s, though deservedly so.) Locally produced brand names will be listed. All part of craft cocktails becoming more mainstream; delightfully so.

Cocktail education will hit the ‘burbs; en masse.
Need a new niche in the business? There is room for you. Unfortunately, Marshall McLuhan, the TV medium is not the message here. We are still a Puritan nation. Sad to say there will be no cocktail Rachel Ray or Guy Fieri on the big tube. The education will happen on line with web sites that enlighten, inspire and then help you book the sessions in person around the island counters in Viking range kitchens and on leafy back patios and porches.

Savory is the new flavor flav.
Saltier, spicier, more bacony even. Anyone want to approach Gold’s Horseradish about doing a vodka? I’ll take the fifteen percent gross point finder’s fee. But it can’t retail for more than $19.99.

An “analog” backlash will emerge this year.
Turn this machine off and look around. You alone? Good. Shhhh. I got a secret to reiterate: An “analog” backlash will emerge this year. One savvy bar owner will start the trend with buying up one of those racks used at the courthouse when you arrive. Machines checked at the door. No excuses. You will have to go without them for a few hours. Share a drink even with fellow humans yearning to bond around a bar. Maybe have an actual spontaneous beginning, middle and end non-distracted conversation with someone. Create something out of nothing. What we do best in this country.

Girls rule.
Beyond what lovely libations comes from the barrel, ladies you rule. Always have our business. Your tastes are adventurous, not lock step. And you listen. Unlike me. So you with your speed racks, you are the overpowering trend of the future. Past and present too. Nothing new. And I salute you as I shiver here in anticipation. Psst: You guys in suits and khakis making six figures, reading this under fluorescent corporate headquarter lights take note: Woo the women.

Hell, Phil may even be a Philomena.

Phil, you watching my back?

May winter be but a tale now. See you at the bar, this year, next year and long into the future I hope.

Tip well. Do not stand in the shadow.

From the street,
John Henry
Early morn
Feb 2, 2012
This report dedicated to Ray Deter. I miss seeing you and your crazy hair on that bike and at dba.

NIGHTCLUB & BAR SHOW NEWS YOU CAN USE