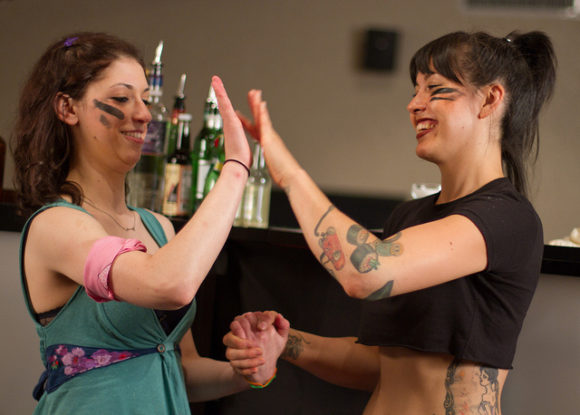 There’s a prayer, chanted by many observant Jewish men each morning, which essentially thanks God for not making them women.

No matter what the rationale behind it is (some say it’s related to being appreciative of the fact they are not in the position of having to withstand the pain of childbirth and monthly menstrual cycles, others attribute it to being thankful that as men they can perform certain practices in the synagogue that women are not allowed to engage in, and yet another interpretation involves Adam, Eve and an apple) there is, within this community, a separation of the sexes and acknowledegement, recognition and appreciation of such. Not an observant Jew yourself? Still, you probably recognize (whether you admit it or not) the differences between the sexes.

So what about the future of the spirits industry? Can it too expect to see an ongoing measure of success and continued growth thanks to women? Well, as Gina Chersevani, Mixtress at DC restaurant PS7, points out, “If it weren’t for women, there would be no cocktail bars; think about who’s in them – its women. Women drive men to go to cocktail bars.”

Sure, Gina, they do. But what about once they get there and the bartenders are women too? Can the success of the industry be balanced on their (the female bartender’s) backs? And on the backs of the growing number of women getting involved in the industry in new ways?

Definitely. Singer-songwriters can barely hold a candle to the powerful impact the women of booze have to offer. In an industry that’s opened its doors to women, finally encouraging them to take on leadership roles in marketing, production and serving alcohol that aren’t limited to secretarial and cocktail waitressing, this mindset is helping to build successful businesses raise capital for themselves (the goal of any business) and raise awareness for the community in which they operate (also a good thing). These women are also working to positioning the industry for ongoing success as bartender Abigail Gullo notes, “I’m not fighting for what has been in this industry, I’m fighting for what will be.” The “fight” is necessary in this industry as it has been in any other as Chersevani points out, “Nothing changes between men and women whether the business is the bar or the boardroom.”

The good fight has been going on for a while and, as anyone steeped in cocktail business history knows, it’s been kicked off in great part thanks to women like Audrey Saunders and Julie Reiner on the operations side of things and Alison Evanow of Square One and Sonja Kassebaum of North Shore Distillery in the production realm. Meaghan Dorman, head bartender Raines Law Room and Vice-president LUPEC NYC comments, “Women are natural at sharing information, they often don’t think holding recipes, ideas etc to themselves is beneficial. For example, Audrey Saunders has always to be open to us younger ladies, in terms how what she’s all ready dealt with, what’s helped Pegu Club be successful and so on. Shawn Kelley concurs, Director of Public Relations at Pernod Ricard USA says, “The women in our industry are amazing. Julie Reiner and Audrey Saunders really carved a path and you can see how the women of the industry have taken hold. From organizations such as LUPEC starting up around the country to events like Speed Rack (www.speed-rack.com), we’re seeing a real women’s movement in spirits that we’re excited and proud to stand behind.”

Apparently there’s plenty to stand behind as Kate Laufer, Director of Public Relations Sidney Frank Importing Company, remarks, “I have seen a significant increase in the importance and impact of women in the spirits industry over the last few years. Much of this is due to the incredible efforts of all involved in key groups, such as Speed Rack and LUPEC, but there is also a strong sense of solidarity amongst the women in the industry as a whole.”

Solidifying and mutual support of women in the industry is one thing that the city by city growth of LUPEC chapters and the evolution of Speed Rack have been able to do. Speed Rack co-founders Lynnette Marrero and Ivy Mix created this special event with solidarity in mind, while also looking to throw their support behind charitable efforts and shining a spotlight on new talent. Mix says, “People like to drink and that’s why all of us have jobs. Why not do something for that? Why not do these events, charge money for them and have that money go to a good cause?”

Marrero points out how collaboration benefits both the event and the supporters. She notes, “Melanie and Lizzie Asher (of Macchu Pisco – www.macchupisco.com) were the first people who used it [press outlets] quickly to let people know what they are involved in. They are a small brand and they maximize their advantage; they tapped into PR newswire and then I saw a lot of chatter going around. And we saw our attendance spike. They spent their own money to do that.” Alba Huerta, GM General Manager Anvil Bar and Refuge and Houston USBG President, says, “There’s a great synergy when women come together and collaborate on a project. It’s like we’ve been waiting for the call to put our resources together and make things happen!”

It’s this kind of effort that creates solidarity in this business. But it doesn’t stop there. It’s also about getting smarter. Danielle Eddy, Public Relations Director at Distilled Council of the US (otherwise known as DISCUS), comments, “Women aren’t just sitting back and doing their jobs – they are getting involved, getting educated on brands and categories and more.”

To Samantha Katz, founder of Ladies of American Distilleries (LOAD) and wife of Allen Katz, owner- New York Distilling Company, knowledge is important not just for one’s own benefit but for the spirits industry in its entirety. She explains, “Information sharing breeds knowledge which is only going to help people in the space navigate tough waters.” Huerta adds, “It’s important to note that as bartenders there’s definitely a glass ceiling that everyone has to encounter. I think it’s important that those of us who have been in the industry for so long continue to improve our education and worth in order to become more valuable resources- men and women alike.”

Whether the waters are tough or smooth sailing, being able to pull together as a unified crew is a secret to women’s power. And why some bars seem better run than others. Dorman explains how it’s done well in her bars, “In terms of getting things done, I would say one of the great aspects about women is that we are great at collaborating and getting a team on our side. At my bar I don’t pit employees against each other or constantly threaten their jobs, which unfortunately we see often in the bar and restaurant business. Whether it’s working on a menu or getting everyone to follow new procedures, I make sure everyone is on the same page, hear out their ideas/concerns and we all move forward. It’s usually quite smooth, because they respect me and love their job. We all want to succeed together; it’s not just about my advancement. It’s definitely a touch of maternal instinct shining through, which is useful in building a staff. Everyone has to feel appreciated and like they have upward mobility. We are our own family.” Huerta has created a similar experience for her team at Anvil and attributes it in part to her gender. She notes, “I definitely do things differently; I find myself being more subjective and organized on a larger scale rather than day to day. I like to create a family rather than a team so that people’s obligations are greater to one another and everyone feels more responsible to follow through and be a reliable employee.”

Being able to rely upon your team and knowing that that reliance means all ships rise with the tide is something that women excel at. Men need to be aware of this too. Antonia Fattizzi, Sales Manager for NY and NJ Lucas Bols USA, offers up some advice for success that she’s gained over the years of being a woman in a man’s world and being just fine with it. She insists, “Do what you love to do and do it well, it’s why we’re here; for the love of the game. Garner a stellar reputation by keeping your promises. Always ensure the interactions you have with your wholesalers and your accounts are about how you can collectively move your businesses forward. Everything you say and do should be about positively associating yourself with your brand(s). The less you focus on who’s a man and who’s a woman and how that may help or harm the situation, the more you keep everyone’s focus on the business at hand which is how you gain a good name. And in this business, as in most, your name is everything.”

And, when all else fails, Chersevani suggest that females in the industry ignore any prejudice, including that early morning prayer that rings out in sanctuaries around the world and simply, “Speak softly, and carry a big muddler.”

*In the spirit of embodying sharing and support it’s necessary to disclose that this headline was inspired by Ivy Mix, co-founder of Speed Rack (www.speed-rack.com).

**It’s also necessary to point out that this story first appeared with a different photo on www.shakestir.com, the bartender community site, on January 12, 2012.

NEVER HAVE YOU HAD A CATASTROPHIC SHIFT LIKE THIS