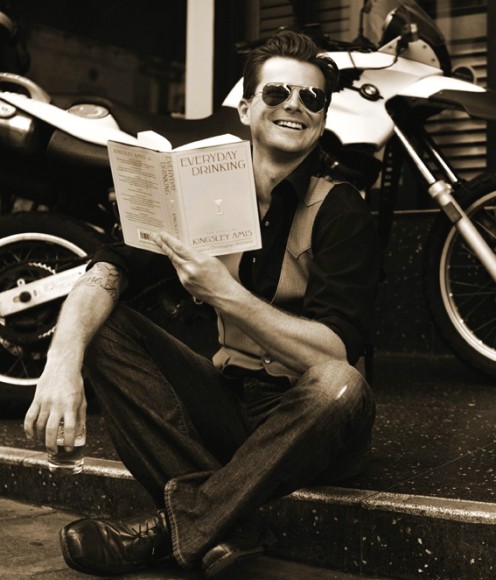 Ask Duggan McDonnell how he ended up where he is now, and he’ll invariably launch into a sermon (quite literally) on how to take the long way to getting into the bar business. For Duggan, one of this country’s most respected bartenders, owner of Cantina – one of San Francisco’s most beloved bars, and most recently, producer of one of the hottest spirits out there these days, Peruvian Pisco (with his brand Campo de Encanto), there never had been a plan to get into the business at all. He actually (really!) wanted to be a minister.

Born in San Francisco and raised in San Jose California, Duggan was brought up in a very religious household. Originally raised Catholic, he took religion very seriously, and when his mother became born-again, Duggan went along for the ride, eventually majoring in theology at college in Seattle. “Religion is nothing if not a great story,” he says, “and for me, the story is what’s important in everything, whether it’s teaching the masses about the ways of the Lord or about the ways of the bar.”

However, it was the scholarly pursuit of writing that most captivated Duggan, and he eventually left religion behind to focus on that, receiving an MFA in creative writing from the University of San Francisco before moving back to Seattle to write “full-time.”

Of course, writing the great American novel full-time doesn’t pay much, so Duggan had to work other jobs to pay the rent while following that dream. Some of the more interesting jobs he took were as an elevator operator at Seattle’s famed Space Needle, an apartment building manager, a customer service rep at Amazon.com, and a busboy at the Scooby Doo Café.

Maybe it was his stint with Scooby, Shaggy, Daphne, Freddy, and Velma that sparked a flame, or maybe it was his job selling wine at Costco that did it, but somewhere during his nine years in Seattle, Duggan realized that he liked the hospitality business and what it entailed: eating, drinking, enjoying life, working and interacting with people who enjoy the same. So he took a job as a barback at Seattle’s enormously popular (read: busy) Wild Ginger. “That place was crazy busy,” remembers Duggan, “I think I lost ten pounds the first month on the job.”

Busy or not, Duggan loved it and learned a tremendous amount, and when he finally left Seattle for good in 2002, he returned to the City by the Bay intent on being a successful mixologist, and staying in the bar business.

After stints honing his skills behind the bar at Castro’s Mecca, and the Redwood Room in Ian Shrager’s Clift Hotel, he was eventually asked oversee the bar program at Daniel Patterson’s new Frisson Restaurant. It was then that Duggan’s star took off. His drinks were noticed by the foodie world, eventually landing him in Food & Wine Magazine, and launching his career as one of San Francisco’s elite bartenders.

Since opening Frisson, he’s been instrumental in bringing the Barbary Coast cocktails to the forefront, co-founding San Francisco Cocktail Week, and in 2007, opening his first bar, Cantina (www.cantinasf.com), an ode to all drinks Latin, now one of the most beloved bars in the city and where he still “actively tends bar.”

And it was on opening night at Cantina that Duggan met the co-author of his next chapter in life: sprits producer. That night he was approached by legendary Peruvian Pisco distiller Carlos Romero, who had heard that Cantina had included a Pisco Punch on the menu and wanted to meet the man who made it. Peruvian Pisco has a long history with San Francisco as it was readily shippable up the west coast in the 1800’s in the days prior to the transcontinental railroad, and Duggan, ever the scholar, had researched that prior to including the drink on his list. He and Carlos struck up a friendship that blossomed over the next year, and eventually led to Carlos asking Duggan to partner with him on a new Pisco venture he was starting. Duggan, thought about it a bit, and after originally saying no, finally said yes “as long as we do it right.”

In the meantime, Duggan had researched Piscos and found what he thought to be the perfect attributes that a Pisco should have in order to “fit” into a cocktail. Those characteristics: richness, smoothness, good viscosity yet light like vodka, and no overpowering notes from the grapes, were the benchmarks that he and Carlos set out to achieve.

Many test runs later, they had what they wanted, and realizing they needed some business expertise, brought in Duggan’s good friend Walter Moore, a veteran of the wine industry and sommelier who had spent some time in Italy making grappa, to oversee the business and marketing side while they ran the production and creative aspects.

The end result, Campo de Encanto (www.encantopisco.com), is one of Peru’s best Acholado (the Peruvian term for blend) Piscos, having won numerous awards in its short existence, and is one of that country’s most creatively driven brands with a thoroughly modern spirit inside its beautiful traditionally-styled bottle. Launched in 2010, it is taking the U.S by storm, and is already a darling with the mixologist set.

I had a chance to sit down with Duggan (and a bottle of Encanto) recently and ask him a few questions.

Q. What was your last big learning experience?
A. At the altar, getting married…

Q. Do you wear an armband?
A. (laughs) Only if it compliments my fake mustache and balloon-sleeve shirt with the Thomas Jefferson collar… All of the sudden, I’m starting to feel very J Peterman…

Q. Favorite garnish?
A. A straw.

Q. Who do you consider your mentors?
A. Being self-taught and trained, I need to take a different path on this one. My favorite writers are John Steinbeck and Gabriel García Márquez. I love their vision of the world.
On the spirits side, Ron Cooper is a true role-model for brand building.

Q. Should rappers and/or celebrities have spirits brands?
A. (Cracks up)Yes! And more need to jump on the bandwagon… and spirits execs should become celebs and rappers… look for my debut album soon…

Q. What do you think makes a perfect cocktail?
A. I like to compare a cocktail to a symphony. The oboe should not be heard above the violin, all the instruments should work together. The same is true for a well-crafted cocktail, no one ingredient should dominate, they must all work together to create the whole.

Q. Where do you see yourself in ten years?
A. Rich and famous of course, due to my hugely successful debut album…
Or, at least older, wiser, fatter, still happily married, and still having fun.

Q. And the industry?
A. Dominated by Pisco, of course! …and a return to authenticity, hoping that which rises to the top is integrity and not preciousness.

Grab a pineapple, a lime and an orange.
Peel and cut a 1/2 cup of diced pineapple.

Shake all with ice ever so vigorously, then double-strain into a rocks glass, garnish with fresh fruit and serve. 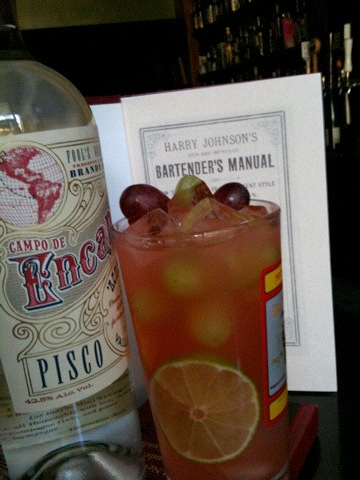