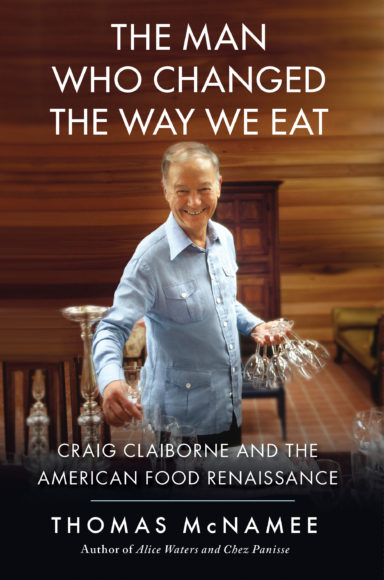 Once on staff, Claiborne slogged his way through assignments, most not related to restaurant reviews. Cannily, when he did review restaurants, he invited senior editors and their wives to join him; on the company, of course. His goal was to make them court him and he dreamed up pleasurable assignments to make research enjoyable. He avoided restaurant reviews as much as possible because there were so few good ones in an age of canned, frozen and prepared foods, and he hated going to bad ones.

His breakthrough came in 1959 with an historic article headlined “Elegance of cuisine is on wane in America,” damming the poor quality of the nation’s restaurants, and hoping for help from the Culinary Institute of America, only recently founded in New Haven and later to move to its current home in upstate New York. Restaurateurs protested, the article made headlines across the nation and shook up the entire food world. Claiborne became the prophet of the American food revolution, and he suddenly had the power and authority he had sought.

In 1962, he began rating restaurants, one to three stars, later four, a system rapidly emulated by other newspapers whose editors scrambled to discover their own ‘Claiborne’ and turn hackneyed women’s pages into money making ventures with reports on local cuisine.

Soon after his headline making attack on the American food scene, he asked the Times for permission to publish a cookbook under the New York Times logo. Astonishingly, management gave him full rights to a work to be called The New York Times Cook Book. Neither party realized how big a deal it was. First published in 1962, and revised frequently, it sold millions of copies—enriching Claiborne well beyond his newspaper salary—and continues to sell strongly to this day, along with the many other books Claiborne wrote.

McNamee tells of Claiborne’s many successes, but he also reveals the dark side. Claiborne’s homosexuality at a time when it was largely masked propelled him into concealed,back door affairs; often in dangerous places, and brought him into years of psychiatric ministration.

Success, and friendship with the culinary greats of his time, chefs Pierre Franey, Jacques Pepin, and Julia Child whose rise he helped with an enthusiast review in her earliest days, as well as other restaurateurs and vendors, made his life more pleasurable but he remained troubled. At the peak of his career, atop the peak he had struggled to reach, ranked at the editorial heights with Times drama critics and arts editors, sought after by society and worshiped by the food world, Claiborne wrote, hedging his words, “As much as I possibly could be, I was gloriously happy.”

McNamee’s book is a biography, and, though not like other recent books by culinarians Anthony Bourdain and Joe Bastianich which are about settling scores with critics and competitors, he cannot avoid exploring Claiborne’s unhappiness and drinking habits. McNamee writes, “Craig always had drinks before dinner, usually more than one and often more than two. Three wasn’t uncommon, four not unheard of. …Seven would have poleaxed almost anyone else alive, but Craig had been known to handle that number and still be able to walk.”

He quotes a memo found in Claiborne’s papers: “I have many times drunken myself on a morbid evening into a blind oblivion…I have courted danger in times of intoxication on countless evenings, most of them …for my own sanity perhaps, not remembered.”

Unsettled, unhappy, Claiborne resigned from the Times in May, 1971. Three years later, after a failed venture into newsletter publishing, he returned to the Times as food editor, presiding over critics such as John Hess (unhappily), and more successfully with Mimi Sheraton, Bryan Miller, and John Canaday. In the early eighties, drinking to excess, taking drugs, writing less and less often and, reprimanded frequently by Times management, his longtime friendship with Pierre Franey and his family ruptured, a longtime love dead, Claiborne’s life spiraled downward.

For the last six years before his death in January, 2000, Claiborne was in and out of hospitals and rehabilitation programs. He suffered from a weakened heart, surgical woes, infection and a series of strokes and financial difficulties, despite the success of his many books. He became increasingly irritable and antagonized friends who tried to help. He died on January 22, 2000.

There was no funeral service and no tombstone for Claiborne. Four years after his death, friends held a modest memorial service and hung a plaque honoring him at the French Culinary Institute in Manhattan. That plaque, and this book, are what exist to keep the memory alive of this man whose name was once so familiar to many.