Galliano competition winners each get a golden Vespa to zip around town, Italian style 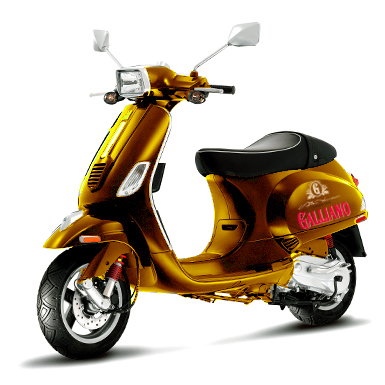 Want your ride to really shine like your cocktails? Show off your version of one of these classic Galliano cocktails – Harvey Wallbanger, Golden Cadillac, or the Yellow Bird – for a chance at winning a custom Galliano-themed golden Vespa.

Many of these classic cocktails go back decades, some even centuries—the Harvey Wallbanger was created in 1952, the Golden Cadillac in the 1970s. Galliano has also been reinvented and reintroduced since its original inception in 1896. Based on the original recipe, Galliano L’Autentico was reintroduced in 2010. The spirit is heightened with a menagerie of herbs and botanicals including hints of juniper, anise and yarrow musk, adding complexity to the signature vanilla flavor and making it an authentic artisanal herbal liqueur again.

To win, just submit an original recipe and photo online to the Galliano Golden Vespa Competition between May 17 and June 14 at this link: http://liqr.co/GallianoContest

Each entry should contain Galliano L’Autentico and have at least one other ingredient in common with the standard recipe.

The deadline for submissions is June 14. Five bartenders will be chosen by popular vote to compete in each of the following cities: New York, Boston, Chicago, Los Angeles and San Francisco. Better get out there and campaign for your fans to vote for you between June 15th and July 6th.

The five bartenders from each city who garner the most votes will be announced on July 10th. They’ll then move on to present their cocktail to a panel of local judges in a winner-takes-all showdown in their city during the summer of 2012 and only one person in each town will be riding to work on a sweet golden Vespa.

About Galliano L’Autentico:
Created in 1896 in Livorno by an Italian named Arturo Vaccari, Galliano is an artisanal and sophisticated liqueur, delicious as a stand-alone drink or as a perfect cocktail enhancing ingredient. The artisan production process blends 30 complimentary herbs and spices into separate alcohols which are then infused multiple times and distilled into a complex and delicious liquid. Housed in a distinctive tall and slender bottle, Galliano L’Autentico is based on an original 1896 recipe highlighting its Italian roots. Galliano is owned by Lucas Bols B.V., the oldest distilled sprits brand company in the world, based in Amsterdam, The Netherlands.

About Lucas Bols B.V.:
Established in 1575 in Amsterdam, Lucas Bols B.V. draws upon a long and rich heritage that forms the basis for all of its brands. As one of the world’s leading cocktail liqueur and spirit producers, the company prides itself on its commitment to innovation and excellence, incorporating the lively, cosmopolitan spirit of modern day Amsterdam with an international flavor. Lucas Bols distributes across 110 countries. For more information on the Lucas Bols B.V., visit www.lucasbols.com.