By Francine Cohen Except as noted, all photos courtesy of Ralph Brennan Restaurant Group

With just a little over a week before most of the spirit industry descends upon New Orleans to attend the 10th annual Tales of the Cocktail we decided it was our duty to honor the “f” in our INSIDE F&B title and bring you a taste of NOLA’s restaurant culture.

Since we’re returning to town for a second installation of “Eat Here Now – NOLA” we’re taking a slightly different approach this time. This time around we’re going behind the scenes to see what makes these Crescent City chefs tick and learn what they’re doing to shape the future of dining in this very food-centric city where the locals have always fashioned an afternoon or evening out around their mealtimes.

New Orleans’ restaurants have, through thick and thin, been a community center and a neighborhood gathering place where you could count on all your favorite dishes filling the menu. These days, as new chefs move into town and up the line bringing new ideas about cuisine, you may be surprised at what you discover on your plate. While the classics are still cherished by locals and tourists alike, culinary change is afoot in this town that possibly sports more iconic dishes than any other in the nation.

From the land of beignets, turtle soup, po’ boys, muffulettas, grilled oysters, étouffée and Bananas Foster rises a new breed of chef. One capable of honoring the past while looking to the future.

Mentioning the Brennan name in New Orleans is the foodie equivalent of referencing the Kennedy administration in DC- in an instant there’s recognition that you’re talking high profile people who have had an impact on their city, though here it’s all about dining, not politics (though certainly a lot of politicking takes place in restaurants). Fortunately for the Brennans their curse seems to be bearing the mantle of a great reputation for running exceedingly popular restaurants and landing in the role of benevolent elder statesmen who balance the past and the present by offering guests exactly what they crave on the plate and in the dining room. They’ve been awarded a James Beard Award for their contribution to the American culinary experience,

Though not a member of the award-winning Brennan clan by birth, Bittermann might as well be an adopted daughter or distant cousin; her contribution to the family’s success involves having spent her entire professional career in Brennan run kitchens.

Bittermann’s first taste of kitchen life took place during high school, in a much different venue…Dominos. The Cincinnati native confirms, “I started out as a pizza delivery girl at Dominos.” It was where she first got her taste of the food industry and then a stint during college spent working in a local family owned restaurant did the rest. She continues, “My family all did medical research. That’s what I was supposed to do, go into the medical field or research. But I started working in a restaurant in college and loved it. It was a small family owned restaurant close to campus and that taught me that the restaurant is a family. I loved the camaraderie. Finally, at one point I turned to my mom and said ‘I want to go to culinary school.’ And quite a look I got! We always went to eat – she took me to restaurants when I was young, but at that point I hadn’t show interest in or a passion for for cooking. Once I started working in the restaurant that’s when I found my passion.” 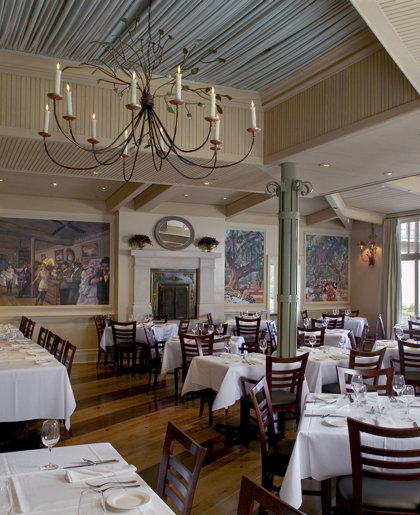 Bittermann’s passion for the camaraderie that comes with working in a family owned restaurant was heightened by the culinary school externship she did at Mr. B’s. She landed in New Orleans kitchen mostly on a whim. One of her culinary school instructors had been a chef in New Orleans and so, based on his experiences that he shared, Bittermann and some fellow students decided it would be fun to go to New Olreans since they’d never been there. Though perhaps impetuous, it was a great decision for her. She comments, “That decision changed my life. Though I didn’t know it at the time. It’s a really fun city to cook in; people just enjoy eating, it’s a big part of the culture. That makes it really gratifying to cook here. Also, to work for people who are so passionate about it [the restaurant business] is amazing. They live and breathe hospitality.”

Reinforcing management’s approach to hospitality is something Bittermann has embraced with all the chefs throughout the restaurant group who report to her. She recognizes the value of hiring, training, and nurturing talent in her kitchens as it all impacts the bottom line. She remarks, “Family owned restaurants have a different feel than those that are corporately run. We’ve gotten big, but it’s still family run. Ralph is in the restaurants every day. We’ve spent a lot of time finding the right people to put in the right positions. If you are really passionate about it it’s going to come through on the plate.” 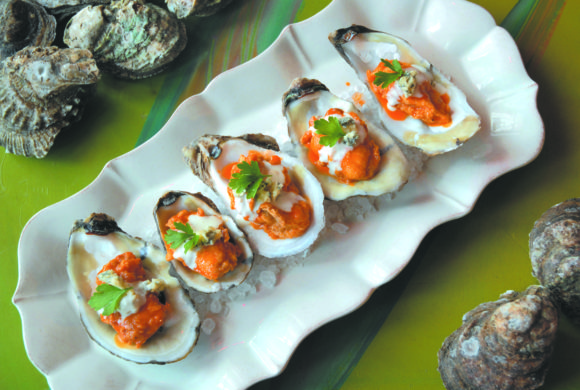 Like the barbecued oysters that have been on the menu at Redfish Grill since day one, some of the plates at the various restaurants she oversees (Mr. B’s Bistro, Ralph’s on the Park, Redfish Grill) don’t change, since that would offend the locals who stop in regularly for their favorite dishes. On the other hand, seasonality, popularity and experimentation drive some menu decisions. Bittermann notes, “Our menus are very fluid. We have big tastings every other week in the restaurant. A lot of it is guided by seasonality. We work a lot with our purveyors and discuss with them how the weather’s effecting the catch, what’s in and out, what fish is running, etc..”

All this directly impacts the ordering as well as how Bittermann instructs her chefs to change the menu in different day parts. At lunch they have a lot of locals coming in regularly and, while they still stop in in the evenings there’s the addition of tourists who have found their way to these culinary destinations and are in search of dishes they’ve heard about. She explains, “Lunch and dinner menu changes happen differently. Locals are coming in for lunch and want to see something new – we want to keep it fresh for them.”

That freshness translates to the new tastes she’s putting on her menu and seeing on others around town. She says, “A lot of time New Orleans cooking gets a bad rap for having fried foods. We’re so lucky to be by the Gulf and fortunate to get that product and I’m seeing chefs cooking bold flavors, but not heavy. That’s what people are steering towards. Locals want to eat better and restaurants are following this trend. I’ve been seeing this healthier trend for a while, and it’s nice to see it hit here.” 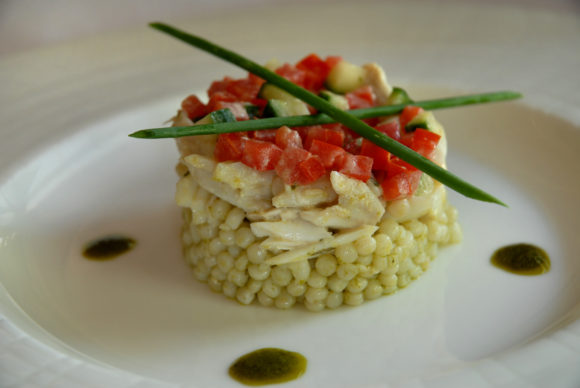 She continues to explain how the changes are coming even in tried and true restaurants like the ones she oversees, “We’ve been diligently working on it on the menus. It’s a little easier at Café b and Ralphs on the Park, both of which are heavily neighborhood vs. Redfish Grill where we have to give them both to keep both audiences happy. I’ve started working with a nutritionist to educate the chefs on fat and different salts and sugar and it’s been a bit of a shock; we New Orleans chefs like our butter and cream. But they’re discovering that you can still have great bold local flavors in a way that isn’t heavy. They are proving that to themselves by competing amongst themselves to see who can come up with lighter dishes that have flavor and isn’t heavy. All in all I think it’s a great trend in the city.”

Though there’s a trend towards lightening up menu items the ties that bind the restaurant community have only gotten strong in the time since Katrina struck a few years back. Bittermann shares, “Directly after the storm some of the challenges we had were simply in securing product. Our selection wasn’t as big as we enjoy now. But the biggest difference since then, and the lesson Katrina taught us most of all, was that we all needed to rely on each other. Before the storm you took for granted all the great suppliers and farmers and afterwards we realized we really needed each other as a restaurant community. We are a tighter knit group now.” 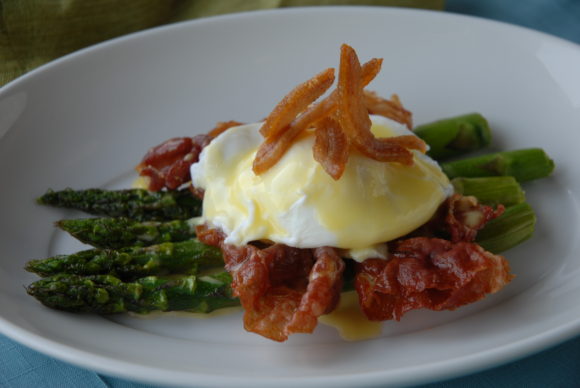 Being smart about how one inserts themselves into that group is something Bittermann feels is important for young cooks to understand. When hiring younger cooks she’s looking for a resume that shows some movement through kitchens where they are exposed to different styles and chefs and cuisines because, as she points out, “those are the building blocks.” However, she cautions them to put down some roots for a little while because, “when you see someone jumping around every couple of months you want to take them and say ‘you’re not building your resume. You really need to know who you’re working for and figure out if that’s who you’re looking for, it’s about making a match.’”

Finding that right match is so important to each chef’s success. And the success of the restaurant community as a whole. She says, “I tell younger cooks when they come down, and chefs who come into the city, that we’re a tight knit group and yes we’re competitive but when it comes time to help we all pull together, no matter who you work for. It’s not a good city to burn bridges in. Always leave on a good note. When you leave a place you leave it the right way. If you make a stupid move you can’t go back and that’s what people remember. You never know who you’re going to turn around and be working for in that city. I believe in karma. I think a lot of it came from my mom; she taught me to respect who you’re working for and to remember that when you find a good fit it’s not always about what the job can do for you but what you can do for that job. That’s where it becomes a career.”

Where to eat like Haley Bittermann:
When not in one of her kitchens, or taking care of her son and husband (also a chef in the Brennan empire – it is how they met), she’s eating out in a place where she can just enjoy the food and relax without it being a research meal.

Maybe next time you’re in New Orleans you’d like to give one of her favorites a whirl:
Pho Tau Bay (113 Westbank Expy, Gretna, LA 70053)