England introduces a delicious set of competitions
By Francine Cohen 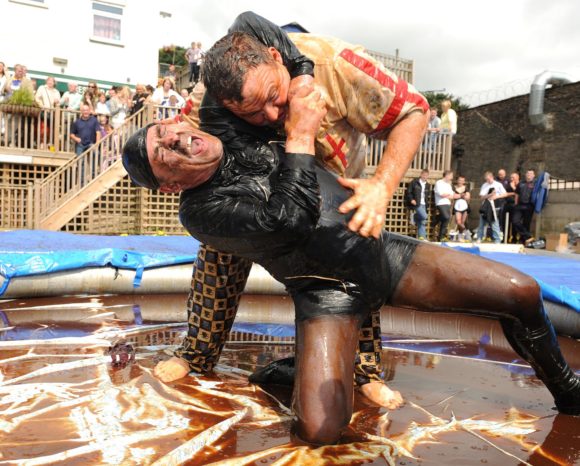 Didn’t get your ticket to the Olympics and feeling a bit like those athletes who didn’t make the team? Not to fear. Lest you think that Michael Phelps, those naughty badminton players, naughty tweets, and the sprightly gymnasts are all that’s worth paying attention to during this Olympic year in London, please note that England has a lot more to offer than just bronze, silver and gold medals.

For those who prefer spectator sports of the less energetic and more delicious kind there were (and still are) a whole slew of competitions of athletic prowess in which one could participate, or just enjoy.

VisitEngland’s Chairman Lady Cobham says: “This year is a fantastic time to be in England, and not just for Olympic and Paralympic sports enthusiasts. The range of alternative sports taking place across the country is evidence of this – there is something for everyone and these unusual events really bring to the fore some of our country’s quirkier heritage and culture. In addition to these annual competitions, there will be hundreds of events and festivals taking place in a jam-packed cultural and sporting calendar.

Thanks to Lady Cobham (www.visitengland.com/en) here’s a line-up of the most interesting alternative (and food related) activities we found going on across the pond this year.

1. Pancake Dashing
February 21, 2012 (Shrove Tuesday), Olney, Buckinghamshire
The unique Olney Pancake Race literally stops traffic as, once a year, energetic local ladies in traditional housewife attire (including skirt, apron and scarf), run through the streets of Olney. The 415-yard dash is started by the church warden at 11.55am prompt using a large bronze ‘Pancake Bell.’ Pancakes are tossed at the start of the race and the winner is required to toss her pancake again at the finish. The race has been run since around 1445 and since 1950, the contest has been an international event between Olney and the town of Liberal, Kansas in the US. The race is run on a timed basis and the winner is declared after times are compared during a transatlantic telephone call. www.visitbuckinghamshire.org/events/olney-pancake-race-p692671 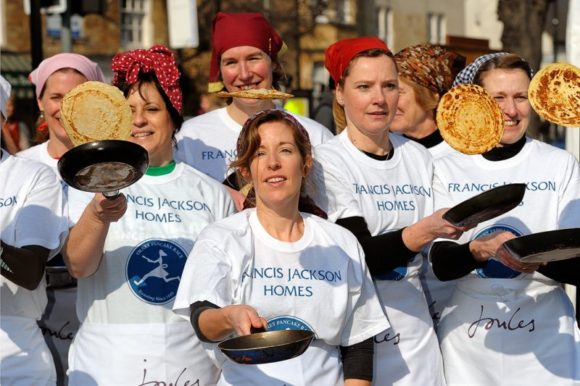 2. Coal Carrying
April 9, 2012, Ossett, West Yorkshire
Held each year on Easter Monday, the World Coal Carrying Contest is a great test of strength and stamina in which participants carry 50kg (men) or 20kg (women) of coal over a mile-long uphill course. The World Coal Carrying Contest dates back to 1963 when a local coal merchant and the president of the Maypole Committee were enjoying a pint together. A friend burst into the pub and bet that he could race them with a bag of coal on their backs. Not to let a good idea go to waste, the secretary of the Maypole Committee decided to set the race for Easter Monday. The current world record, held by David Jones of Meltham, is 4 mins 6 secs. But will he hold onto it? www.gawthorpe.ndo.co.uk/coal.htm

3. Shin-Kicking
June 1, 2012, Dover’s Hill, near Chipping Campden, Gloucestershire
Started by local barrister Captain Robert Dover in 1612, the annual Cotswold Olimpicks attracts thousands of spectators and features some well-known countryside games such as tug-of-war, obstacle races and wrestling as well as a few stranger events – including shin-kicking. The two contestants first fill their trouser legs with straw – to help reduce the pain – before holding one another’s arms and kicking each other wearing steel toe-capped boots. The loser is the competitor that gives in to the pain and bruising first. 2012 marks the Olimpicks’ 400th anniversary, so expect some special celebrations this year.
www.olimpickgames.co.uk 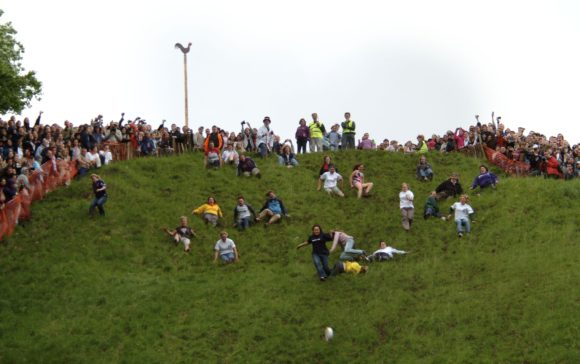 4. Cheese Rolling
June 4, 2012, Brockworth, Gloucestershire
A passion for cheese is a must for this annual event, which involves daredevils hurling themselves down the steep, grassy slopes in pursuit of Double Gloucester cheeses. The race starts with the master of ceremonies rolling a 4kg Double Gloucester cheese down the hill. On the whistle, competitors run, roll and somersault down the hill after it. It’s impossible not to fall over due to the rough uneven nature of the slope, which has a dizzying 1:2 gradient. The winners take home the cheeses as well as a few cuts and bruises. The event dates back to medieval times and is popular with international competitors.
www.cheese-rolling.co.uk

5. Egg Throwing
June 24, 2012, between Helpringham & Swaton, Lincolnshire
In the annual World Egg Throwing Championships, contestants must construct a gravity-powered egg-hurling device to launch an egg to a waiting team member. To achieve points, the team member must either catch the egg unbroken or get struck by the egg. As the egg can be traveling at speeds of up to 120 mph this is particularly tricky and can be painful. Distances to be achieved start at 30 meters but can be extended up to 150 in the knock out competition. Event competitions include basic throwing, catching relays and egg roulette.www.eggthrowing.com 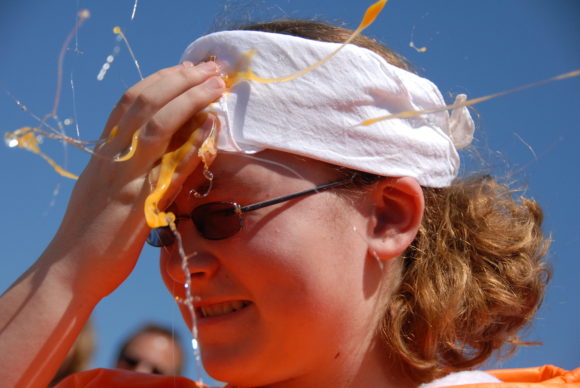 6. Pea Shooting
July 14, 2012, Witcham, Cambridgeshire
This international event brings challengers from as far as New Zealand and the US to compete for the World Pea Shooting trophy. Accuracy, not distance, is the aim of this competition, with contestants shooting a pea through a 12-inch tube, 12 feet towards a 12-inch target. Competition is fierce and laser-guided shooters for specialists are not uncommon. Pea shooters and peas can be bought at the event.
www.eastcambs.gov.uk/tourism

7. Toe Wrestling
August 25, 2012, Fenny Bentley, Ashbourne
Each August the Bentley Brook Inn in Derbyshire hosts the Ben & Jerry’s World Toe Wrestling Championship. The event was conceived in 1976 in a pub in Wetton, when the locals of ‘Ye Olde Royal Oak Inn’ thought it would be a great idea to hold a toe wrestling competition. Competitors locked their big toes together, and attempted to force their opponent’s foot to the ground. The organisers have big intentions for the sport, and applied in 1997 for its inclusion in the Olympic Games. Unfortunately for fans, it was not accepted. www.bentleybrookinn.co.uk/page14.html

8. Gravy Wrestling
August 27, 2012, the Rose & Bowl Inn, Bacup, Rossendale.
The World Gravy Wrestling Championships take place annually as part of the Pennine Lancashire Festival of Food & Culture and celebrate their 5th anniversary in 2012. In this saucy challenge, teams slide around in lukewarm gravy and attempt to wrestle on another to the ground. Team members win points for pinning the opposition down in the gravy. www.worldgravywrestling.com 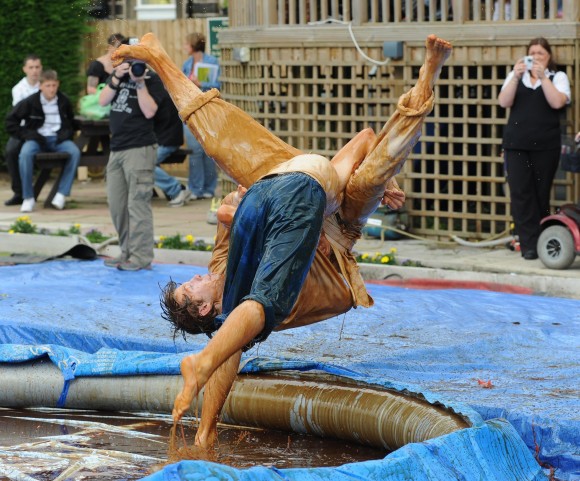 9. Black Pudding Throwing
September 9, 2012, Royal Oak, Bridge Street, Ramsbottom, Lancashire
Lancashire is famous for the production of this regional delicacy – along with tripe (cow’s stomach) and elder (steamed cows’ udder) – and so is a fitting home for the World Black Pudding Throwing Championships. The aim is to throw a black pudding that has been wrapped in a pair of ladies tights at a collection of Yorkshire puddings on a plinth 20 feet up a tower built in the middle of the main street in Ramsbottom. Whoever knocks down the most, wins! www.ramsbottomonline.com/tag/the-world-black-pudding-throwing-championship/

10. Conker Knockout
October 14, 2012, Ashton, near Oundle, Peterborough
The game of conkers has been a popular pastime for British schoolchildren for decades. The rules are simple. Each player is given a conker (horse chestnut) attached to a piece of string and they take turns to swing their conker at their opponent’s and try to break it. The World Conker Championships are held each year on the village green in Ashton, Peterborough and attract over 300 competitors attempting to become the King or Queen of Conkers. There are various categories for the knockout competition – ladies, men, teenagers and children. The world tournament came about after a group of local friends had to cancel their annual fishing trip one year. From the pub, they saw conkers falling from the trees onto the village green. They went out and had a game… www.worldconkerchampionships.com

And, if you’re just looking for a quiet London vacation in a hotel that cherishes creative culinary ideas, you might want to check out the Andaz Liverpool Street property where they just wrapped up a culinary Olympic feat of their own. (www.london.liverpoolstreet.andaz.hyatt.com) In the days leading up to the Olympic Games the hotel featured a “World Food Marathon”, offering a different dish each day that was representative of one of the staff members’ native countries. Each of the hotel’s four restaurants (1901, Catch, Eastway and Miyako) got into the spirit of things, presenting 26 dishes (Get it? A world food MARATHON) with the chef collaborating with the featured country’s staff member to make sure every last bite was deliciously authentic. 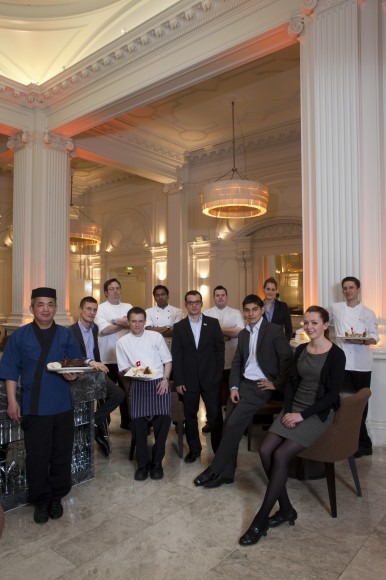 It may be too late to eat your way around the world courtesy of Andaz staffers’ home cuisine, but it’s never too late to book your flight and see what else these restaurants have to offer. Or you could just go for the conkers.

ESCAPING A TRAP AND EMERGING VICTORIOUS