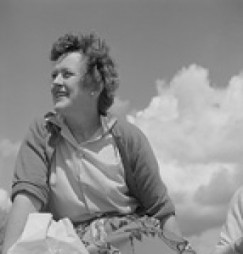 Julia, like me, was a breast cancer survivor and at a time when the survival statistics were not as good. She faced it; beat it and lived to 92 eating and drinking whatever she wanted. Julia did not live her life in fear; she feasted on enjoying it and the company around her. Today so many of us live under a fear factor with food. Julia did not.

Julia kept her sense of humor and connection with the common man even when surrounded by fawning fans. I would watch her navigate an event with people peeling away staring in awe at her, reaching out to touch her. She did not have body guards like some TV chefs at food festivals or give off airs of culinary superiority. She was real, and her TV show, The French Chef, was the kind of “reality” show I would choose to watch today rather than the crap we now have on TV. If she made mistakes on the set, she acknowledged them and wiped them away with a sense of humor. We should all learn to wipe away our mistakes with a sense of humor rather than dwell on them.

Julia had a healthy marriage with her beloved Paul, and they made a great team. How lucky to have someone stand by you through thick and thin as you find your true calling in life! Paul was the flame that ignited not only Julia’s passion but also her stove. He loved to eat well; she learned to cook to make him happy.

So as a born again foodie who prefers olive oil and veggies over beurre and boeuf, I may or may not master any of the recipes in Mastering the Art of French Cooking. But I have learned one recipe from Julia that I will continue to try and master: Mix one part passion, 1 part sense of humor, 1 part self confidence, 1 part survivor instinct and 1 part inquisitiveness. Mix with a generous dose of love from the right person and add a lot of spice. Serve and share with friends.

Photo by Paul Child, courtesy of The Schlesinger Library.