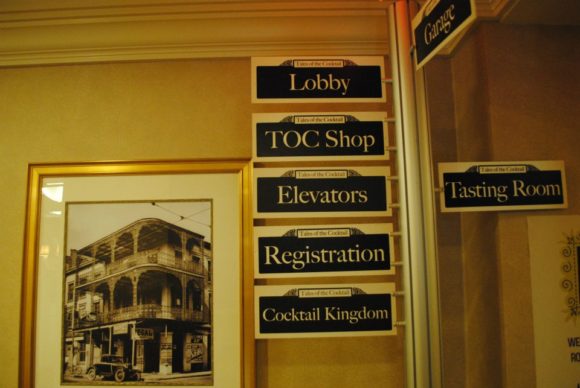 This year, Tales of the Cocktail celebrated its tenth birthday by doing what it does best: throwing a conference for the spirits industry that is unrivaled in its scope and size, and unmatched in its dedication to providing the bar industry with a forum to share ideas, learn from its legends, try new products, and move itself forward.

I could wax poetic about the program, which under the close supervision of founder Ann Tuennerman (aka: Mrs. Cocktail) has grown in ten years from being a one-day happy hour and dinner to a six-day extravaganza of seminars, tasting rooms, awards programs, meet and greets, parties, and more parties. But we all know that, and there are plenty of other columns that can tell you what seminars were new this year, what products were launched, and who won what award.

Instead, I’d just like to let you know what I considered to be the most interesting experiences and trends at Tales this year. So let’s get to it…

Most interesting spirits trend: Anything white. Whether it was white whiskey or moonshine, Pisco (either kind, see below), grappa, white rum, gin, or some new vodka made from a particular type of grain grown only on Mars, white spirits seems to be all the rage this year with the mixologist set, who are using it to create wonderfully crafted, clean, well thought-out cocktails. Cheers to that!

Honorable mention should go out to the liqueur category. Four wonderful products stormed Tales this year: Mandarine Napoléon was re-introduced, Cognac Ferrand’s Dry Orange Curacao, which made its debut earlier this year, won best new product at the Awards, Lillet’s delightful Lillet Rose made a big splash (and was also runner-up to Ferrand’s Dry Curacao), and Marie Brizard showcased it’s new Essence line of liqueurs during its U.S. Cocktail Competition Finals on Friday, at which, I am honored to say, I was a judge.

Most interesting seminar: Without a doubt, the most interesting, and also most entertaining, seminar I attended was The Pisco Wars: Peru vs. Chile since 1613. These two countries have been vying for Pisco dominance and authenticity for generations, and that all came to a head in this funny and entertaining seminar led by Steve Olson and featuring a panel of producers and historians from both countries. Everything seemed to be going Peru’s way for most of it, as their team of specialists made many a convincing argument in favor of that country’s claim to be entitled to be the only country that should rightfully call its product Pisco. Historical documents, newspaper clippings, royal charters all gave street cred to the claim which was made over a 45 minute period in front of a boisterous and at times excited crowd. However, in the end, it took the Chilean team all of 15 seconds to lay waste to all of the Peruvian team’s hard work by producing an old map of the original geographic layout of the Spanish territories of South America from the 1600’s showing that the land now called Chile was originally part of what was then called Peru, and that since Pisco was produced at the time in two geographic locations in what was all one country, they shouldn’t have to change the name just because the borders were redrawn separating the one territory into two countries sometime in the 1800’s…
In my opinion, both these countries are producing better products than ever before, and we all win whenever we take a sip from either… 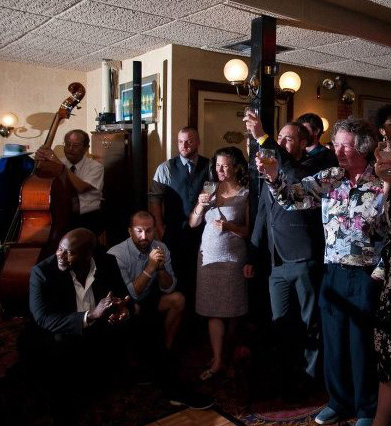 Most interesting dinner (cruise): Thursday’s The Life and Times of Tom Bullock dinner on the Paddlewheeler Creole Queen. Hosted by Colin Asare-Appiah, Jim Meehan, and the always entertaining Dave Wondrich, and featuring cocktails by Colin and Jim along with Tal Nadari and Dan Priseman, this spirited dinner was an ode to the first African American to write a cocktail book, titled The Ideal Bartender in 1917. Bullock, who lived in St. Louis, was quite famous in his day, so famous in fact that the forward in his book was written by none other than George Herbert Walker, grandfather of President George Herbert Walker Bush (and great-grandfather to W…). What set his book apart, aside from it being written by a black man in a time when most blacks in this country were illiterate, was that it was one of the last pre-prohibition cocktail books published, and contained cocktails that may have been forgotten (and we may never have gotten to drink) had he not written them down. Kudos to Colin, for being inspired to bring this to us, and also to the event’s sponsors, Four Roses Whiskey, Pierre Ferrand Cognac, Bols Genever, Banks Rum, and Bar and Books for helping us learn more about our heritage.

Speaking of cruising, one surprisingly interesting event I attended was a luncheon hosted by Carnival Cruise Line to highlight their new revamped cocktail program under the tutelage of new VP of Beverage Operations, Ed Allen, formerly of Tao Management group (Tao, Marquis, etc). Of particular interest was their Alchemy Bar program, expertly managed by Master Mixologist Adri Ford (recently named Bartender of the Year in the 7th Annual Bacardi Cruise Competition), which allows customers to create their own cocktail recipe for the bartender to make (of course, the staff WILL let them know if the drink is going to suck or not, and steer the customer in the right direction to avoid any embarrassment). Yet another example of how the big guys are taking notice and learning from the little guys.

Most interesting cocktail trend: Simplicity. There was a time when the cocktail industry seemed like it had to outdo itself with every new cocktail that came along by using the newest spirit, the oddest of ingredients, and the unlikeliest glassware (since all cocktails at Tales are served in little plastic cups, mentioning that particular fact here may garner a few raised eyebrows from those readers who attended). This year, I was pleased to see that the industry is starting to move away from the “Cocktail Rococo” as my Bottoms Up! radio show co-host Jennifer English likes to call it, and is embracing the use of fewer components, and less “out-there” ingredients to make their drinks. That is not to say that bartenders are no longer experimenting. Quite the contrary, they are certainly doing that, and even furthering their methodology with concepts like barrel-aged cocktail programs (as are brands like Chivas, who has an exemplary version that was featured at Tales this year) and beer-based drinks (no, not a Michelada). But they are also showing more refinement and perhaps finally agreeing that a cocktail is best when its ingredient list is short and exhibits a flavor profile that does not require a PhD to comprehend. 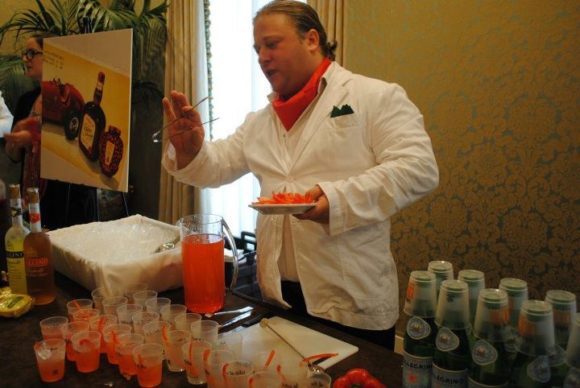 One cocktail that I remember as being a good example of this was Fancesco Lafranconi’s Pallini Limoncello Sparkling Cocktail showcased at the Spirit of Italy Brunch. Expertly crafted onsite by Sydney, Australia bartender (and Rocks Star) Marco Faraone, and made with Limoncello, Gin and Prosecco, it was simply garnished with a slice of red bell pepper, and screamed “refreshing.”

There were countless other parties, show rooms and drinks to speak of, too many to list, really, and the mainstay sponsors again put on a stellar show: 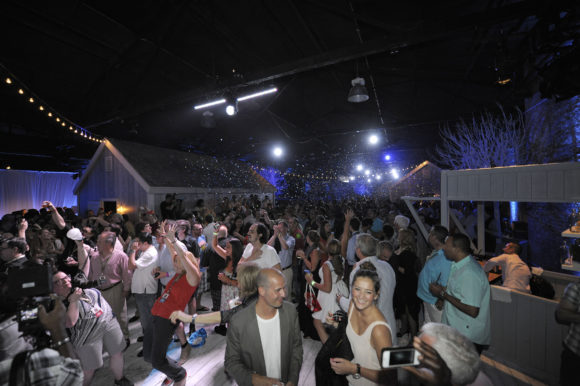 • William Grant and Sons hosted a birthday party for Tales at the New Orleans Museum of Art. Charlotte Voisey and “Team Calvo” did another fabulous job getting everyone one into the spirit of things. 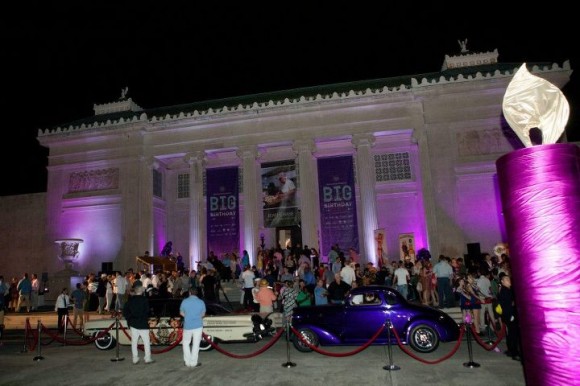 • Diageo’s Thursday evening “A World Class Happy Hour” in the Old U.S. Mint building near the French Market was once again one of the highlights of the week.

• And to end it all, William Grant’s Milagro Pool party had so many attendees that the Hotel Monteleone’s rooftop pool was close to overflowing with tequila-fueled bikini-clad revelers gloriously baking in the Sunday afternoon sun…

All in all, it was an amazing week, and Ann and team once again put on a great show. I’m already making plans for next year, but first:

Congratulations Tales of the Cocktail, on turning ten years old. I remember when I turned ten, and while there was cake and the entrée of my choice for dinner (it was probably lamb chops), I assure you there were certainly no cocktails, huge parties, or late-night carousing through the streets of the French Quarter in celebration of finally reaching double digits.

Of course, when I turned ten, mixologists were still called bartenders…

BARS, RESTAURANTS & THEIR STAFF ARE STRUGGLING DURING THE PANDEMIC – YOU CAN HELP…