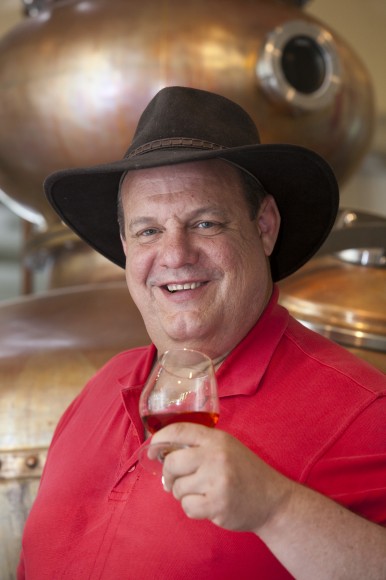 “Never even thought about it.” That’s the answer you might get from David Pickerell, if you ask if he always dreamed of making whiskey. Interesting to hear, no doubt, especially from the mouth of one of the industry’s greatest icons and most prolific distillers, who, probably more than anyone alive, has helped to shape the face of modern American whiskey, particularly craft distilled whiskey, and make it what it is today.

Pickerell is probably most recognized for having been the Master Distiller at Makers Mark for 14 years, a job he backed into after Makers Mark owner Bill Samuels saw his promise and his meticulous attention to detail, and asked if he’d take the job. Of course, that appointment didn’t come out of the blue, Pickerell spent years setting himself up for it, he just may not have realized that distilling whiskey would be the outcome of his plan.

Born in Fairborn, Ohio to a middle class family that “didn’t have all that much,” Pickerell showed a talent for analytical thinking at an early age. “From the age of five, my obsession was anything chemistry,” he says. By high school, he was at the top of his class in math and chemistry (two cornerstones of distilling), and also in football, making the All-State team. This led to a scholarship to attend West Point Military Academy, at which he earned a BS in Chemistry upon graduating in 1978. Post-graduation, he spent another 5 years in the Army as a cavalry officer, before being asked by his alma mater if he’d like to teach. Accepting, Pickerell attended the University of Louisville (while there, possibly drinking some bourbon from nearby Bardstown while studying, thereby seeding his interest in the chemical process of distillation?) before returning to West Point as a professor. Eventually, Pickerell realized that a career in the military was not for him, and thankful for all the Army had given him, he left the service to make his own way in the private sector.

One of his mentors at Louisville had been Dr Charlie Plank, a professor in the chemistry department who taught thermodynamics, the branch of physical science that deals with the relations between heat and other forms of energy (thermodynamics play a key role in the distillation process). Upon leaving West Point, Pickerell touched base with Plank and through inquiries based on his advice, started working on consulting projects around the world building stills in distilleries for large companies like Beam Global (Jim Beam), Brown-Forman (Jack Daniels), and other assorted companies. As his knowledge of the distillation process grew, so did his fascination with the product it created; and when a consulting gig with Makers Mark presented itself in 1989, Pickerell took it gladly, knowing it would allow him the opportunity to learn more. That job eventually led to his being tapped by Samuels to move from the equipment side into the distillation side of making whiskey, and five years later, now on payroll fulltime, Pickerell accepted the Master Distiller title, which he kept until his departure in 2008.

“At the time, Makers (as he calls it), only had the one product, and the formula had not changed in decades,” says Pickerell. “And I kind of felt like I needed to start learning again. The craft distilling concept was just starting to take off, and I thought it was the right time.”

So, Pickerell threw his hat in the ring by opening Oak View Consulting, and has never looked back. His most notable project has probably been Vermont-based Whistle Pig Rye, a concept, bringing an ultra-high quality straight rye whiskey to the market, he achieved with huge success along with owner Raj Peter Bahkta. Other ventures of note include Woodinville Whiskey Company in Washington State, Old Smoky in Tennessee, and most recently, the resurrection of George Washington’s distillery at Mt Vernon, which he’s helped put together from the ground up, and which Pickerell considers to be one of his most gratifying achievements. A fitting testimony, and show of gratitude, perhaps, from a West Point Grad to his country’s founder and first Commander in Chief, who, along with fellow patriot Thomas Jefferson, also founded the school which by his own admission, gave Pickerell so much.

These days, Pickerell, who is still based in Louisville and a married father of four grown children, has about two dozen projects going at any given time. Most are whiskey based, but he’s also starting to branch out into other categories (with some consulting help of his own) like rum and gin.

I had a chance to sit down with Dave on the front porch of the revolutionary-era farmhouse in New York’s Hudson Valley which is the backdrop for his latest project, the country’s first ever Solera method whiskey, Hillrock, released to critical acclaim in the Fall of 2012, and ask him a few questions:

Q. With so many projects, how do you A: find the time, and B: keep them all straight?
A. Most of the work I do is front-loaded to get the distillery up and running, including perfecting the formula for the product and making sure the still is tweaked to produce that product consistently time after time. Once that is accomplished, it’s really maintenance, and I can move on to other concepts. I, of course, do check back regularly, and am always available for questions or to evaluate samples. And on that note, I also find myself giving advice to people I’m not consulting with on a fairly regular basis. I’ve no problem with that. It makes whiskey better.

Q. What are your big projects right now?
A. Well, I’m still heavily invested, time-wise, in Whistle Pig. I spend about 15% of my time there. I’m also at Mt. Vernon and Hillrock a lot, as they are really just getting started. Places like Woodinville, etc. are further along, so require less of my time.

Q. Are you doing other spirits these days, as well?
A. Yes, I’ve started working with a few folks to play with Gin, Vodka and Brandy. I’m a big fan of Gin, so of course am interested to learn more about it. This affords me the opportunity to do so.
I’ve also done some Rum work. I tend to ask for pointers of my own from experts in those categories, when working to define the distillation of those spirits. My latest venture, Solbeso, is a New World spirit I am helping develop in South America based on cacao extracts. Totally different, and I’m really excited about it.

Q. Any favorite brand of Gin?
A. Probably Tanqueray. I like Plymouth, too.

Q. You have a hand in so many products, I would assume you never get tired of it because you simply love it so much. Do you have a favorite brand at home?
A. Probably Russell’s Reserve. It’s just a great product.

Q. Favorite cocktail?
A. I’m a sucker for a well-made Sazerac.
Q. My dog’s name is Sazerac. Can you guess how I might answer that one?
A. (laughs…)

Q. What are your thoughts on the craft movement?
A. Craft distilling is what driving the industry right now. The big guys are not only looking to the small producers for inspiration, Jack Daniels just released a white whiskey for instance, but are also in the process of starting to acquire some of them. That tells me two things: craft will continue to grow with at least 2-3 more years of rapid openings, and the big guys will continue to buy more and more of them.

Q. If you could pick a rising star in the craft movement, who would you pick?
A. Chip Tate of Balcones. He’s doing some amazing things.

Q. What’s the next big innovation in the spirits industry?
A. In whiskey, Solera will be a big hit. In other categories, Gin and Genever will hit, finally.

Q. When not on a plane or in a distillery, what do you like to do for fun?
A. That doesn’t happen much, but when I get some downtime, I love to go hiking in the Great Smokies.
Q. To get closer to that great whiskey-making spring-fed limestone-filtered Appalachian water you find down in the Holler, not doubt.
A. Something like that…