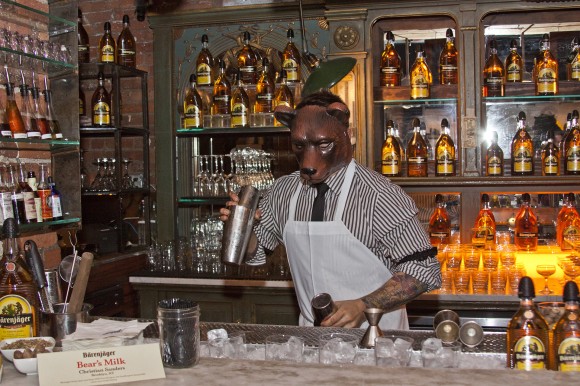 There are A LOT of cocktail competitions out there. One after the other, brand after brand, city after city, country after county, nice cash prize after nice cash prize. But one annual competition that deserves some special attention is the 4th Annual National Bärenjäger Bartender Competition (www.barenjagerhoney.com).

Why? Because this was the first of all the cocktail competitions to include an audience participation voting component, setting itself apart from all the rest. And, it just may be the only branded cocktail competition that welcomes amateurs as well as professional bartenders to compete.

To build awareness of the competition salespeople hand out fliers in their regions and press outlets (like this one) mention the competition in hopes of drumming up entrants who will have their recipes blindly judged by the likes of Dushan Zaric (Returning judge and founder of award-winning Employees Only and Macao Trading Co.), Jim Meehan (Managing Partner of PDT in NYC and author of The PDT Cocktail book), Sean Kenyon (Third generation barman and proprietor of Williams & Graham in Denver, CO), and Tricia Alley (Director of Mixology for South California at Southern Wine & Spirits and USBG LA Chapter President).

Kate Laufer, Director of Public Relations for Sidney Frank Importing Company, makes sure the drinks, whether they come from professional bartenders or home enthusiasts, are all presented on a level playing field. She comments, “Wholeheartedly Bärenjäger is completely blind. Judges don’t see submissions in advance. They just see the name and ingredients for the drink – nothing about where the person is. So that results in something like having Brad Farran competing with a complete unknown.”

The idea of including enthusiasts into the competitive mix was completely unheard of until this competition came along. Laufer notes, “When we started exploring a competition four years ago we looked at the portfolio and the brand and we saw that bartenders liked the spirit and liked to play with it. There are so many different kinds of bars and bartenders. It didn’t see fair to limit the competition given the versatility of the brand.”

That versatility doesn’t stop at drink creation; Bärenjäger follows through the equality theme by incorporating audience participation in a nod to the reality that everyone’s palate is different. Laufer comments, “It’s not just about the judges, it’s also about audience participation we wanted everyone to be included in the final say. Palates are different and mixologists are different from an influencer and we want to give credit where credit is due. If a drink is too sweet for esteemed judges it may be exactly what the crowd wants. You look at volume vs. craft cocktail bars and there’s a happy balance there and you want participants to feel it is as fair as possible throughout the whole thing.”

What’s interesting about opening up the field is that in the past three years this competition has been underway the judges’ choice and the crowd favorite has never been the same person. Laufer concludes, “It’s come close. Ultimately you have two winners and you’ve had two chances to win.”
For your chance to win this year’s contest which welcomes professional and amateur mixologists from across the country to submit their most innovative cocktail creations incorporating Bärenjäger Honey Liqueur or Bärenjäger Honey & Bourbon check out: www.BarenjagerHoney.com and complete the online registration form by August 23, 2013. Must be at least 21 years of age to enter. No purchase necessary. The official rules and regulations can also be found on this site.

Know that the judging panel, which includes esteemed industry tastemakers and a surprise celebrity judge, will score all submissions prior to selecting the top six recipes to move on to the final round. Finalists will mix off at a private event at The Houston Hall for media and industry influencers on September 16th in New York City for a grand prize of all-expenses paid trip to “BEARlin”, Germany and $1,000. Additionally, all guests will be asked to cast their vote for best cocktail, and the audience favorite will take home a check for $1,000 to sweeten the pot.

Todd Richman, corporate mixologist at Sidney Frank Importing Company, Inc., and winner of Best American Brand Ambassador at the 2013 Tales of the Cocktail Spirited Awards, will serve as the competition’s emcee.

*Contest is not open to residents of California, Texas, Hawaii and Alaska.

ONE NIGHT ONLY DISCOUNTS IN THE CITY OF BROTHERLY LOVE