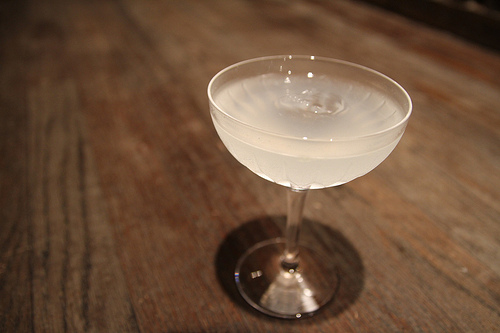 Over the course of two days I was side by side with some of the greatest cocktail minds in the country who sat quietly in the Hiro Ballroom in the Maritime Hotel (www.themaritimehotel.com). These bartenders, mixologists, writers, scientists and all around mega-nerds surrounding me all came to check out the cocktail master himself, Kazuo Uyeda from Ginza, Japan, owner of the Tender Bar, and learn the famed Hard Shake from the man who had created it.

Uyeda-san’s visit to New York, courtesy of Greg Boehm’s Cocktail Kingdom (www.cocktailkingdom.com), Beefeater Gin (www.beefeatergin.com), Suntory Whiskeys (www.suntory.com) and Smirnoff Vodka (www.smirnoff.com), drew this collection of America’s brightest drinks practitioners together in anticipation of learning the precise ways of Japanese bartending from this internationally known cocktail-zilla who has spent the last 45 years behind the bar perfecting the art of cocktail deliciousness – his ultimate goal. We didn’t know it then, but an eye-opening cultural exchange was about to take place. 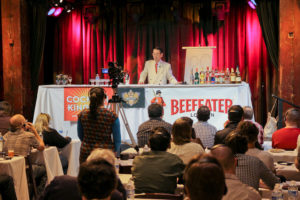 Over those two days we sat listened, percolated, drank, and laughed with this man who has spent the last four decades perfecting his craft. The style he taught us was as specific, detailed, exacting and considerate as the Japanese tea ceremony or the hand-crafted Samurai sword. To the drop, and in absolute detail, he explained the minutiae of every element of his cocktail execution.

That first morning I was introduced to Uyeda-san’s concept of executing cocktail perfection. He discussed the intrinsic and philosophical elements of his style that are embodied by drink after drink being delivered with the same stance, same shake, same pour, and same snapping wrist motion that releases the last drop from the shaker. His decades of research and experimentation have been driven towards a singular goal: the pursuit of perfection and deliciousness. 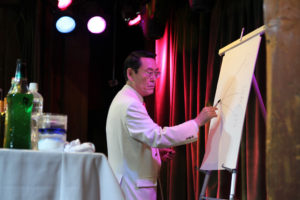 He first discussed the “Japanese Mindset” which introduced me to the idea of putting your mind into your cocktail. This was interesting in the respect that the process was the product. The concept of creating the anticipation with your guest was something I tried to picture myself doing, with little immediate success. This, he explained takes time and “training yourself to concentrate.” He went on to explain that one’s technique and performance are a direct expression of one’s self. Now, I always knew that ten different bartenders can make the same drink ten different ways, but this was starting to get deep; like the middle of the ocean deep.

To maintain the focus on the process and the technique of making a cocktail, the second half of the first day was about employing your guest to be the final judge. This seemed like an elementary concept to a cocktail bartender, but his next topic edified this point. “Heart, Technique, Body” was about challenging yourself to make every drink better than the last. Somehow this equated to the principal of a sumo Rikishi, whose battle is won with positive thoughts, not necessarily by strength or stamina. These concepts were fascinating, but I was beginning to think about the massive cultural divide between making drinks in Japan, and making drinks, well, everywhere else.

Day two was all about technique, and boy was that interesting. There was coverage on how to hold a bottle (at the bottom third so that your wrist could move freely and with the label pointing up so you don’t drip on it – a hazard from the old days when the ink would run), handling a jigger, free-pouring, and even the proper use of lemon peels, but I think everyone was really waiting for the infamous and elusive Hard Shake. I’m pretty sure we had all seen this magical whip/snap technique on YouTube, or heard of it, but it’s not the same as when its inventor, Mr. Uyeda, shows us his four-points of impact, specific method of shaking.

The first stroke is off-axis and emphasized with a ‘snap’ towards 1 o’clock, the second stroke is less emphasized and again snapped at three o’clock, the third stroke is again weaker and closer to 5 o’clock, and the final stroke is towards about 4 o’clock. Snapping? O’clock? Axis? 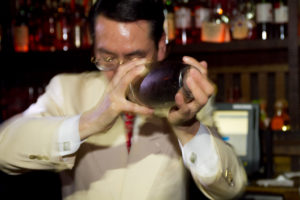 At first I was thinking, this is 100% bullshit, but then I started to think about how this was important for what Mr. Uyeda was saying about the process being the product. This dizzying method of shaking is purported to “soften the alcohol” with the tiniest of air bubbles that aerate the cocktail, thus creating a more delicious cocktail.

Some of the less timid men in the room; namely Danny Valdez (Cure, NOLA – www.curenola.com), 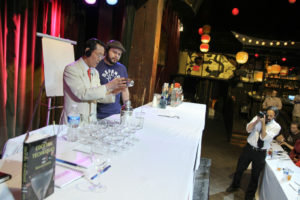 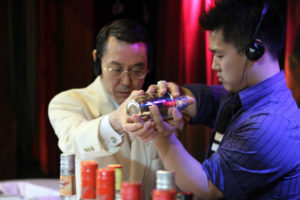 and Dave Shenaut (Teardrop Lounge, Portland, OR – www.teardroplounge.com) actually went up on stage to shake with Uyeda-san, which was really really cool. 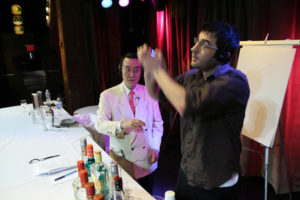 These techniques were no doubt intense, but I couldn’t help but to feel that most of these techniques were obsolete in an American bar. ANY American Bar. Our practice of shaking two shakers at once was completely foreign to Uyeda-san; frankly, making more than one drink at a time is not something that will ever be considered at the Tender Bar because in Ginza, their customers are obviously willing to wait 15 minutes for a 3 ounce cocktail (the specs on his gimlet were 3/4 gin, 1/4 lime juice, and a teaspoon of simple syrup!!). In America, as you probably know, this is not the case. This is due, in large part to the McDonald’s induced fast food culture that has permeated our food and beverage conscious for as long as, or longer than, Uyeda has been tending bar.

All things considered it was an amazing event, and I was quite honored to be there. The room was lively and full of the country’s best bartenders. Some of these techniques I may not adapt wholly to my own cocktail style, but I appreciated Mr. Uyeda’s underlying message that intensity and mindfulness just make better cocktails. Furthermore, it was interesting to see this master of beverages learning from us as a group with concepts that are so basic to us, but so austere in Japan. Flaming an orange peel? Huh? Two drinks at once? Get out.

Granted, some of this was obviously lost in translation (did anyone else notice that one of the translators ruled??), but this much was clear. His method is the product of years of self observation and extremely disciplined and patient study, and is absolutely to be respected.