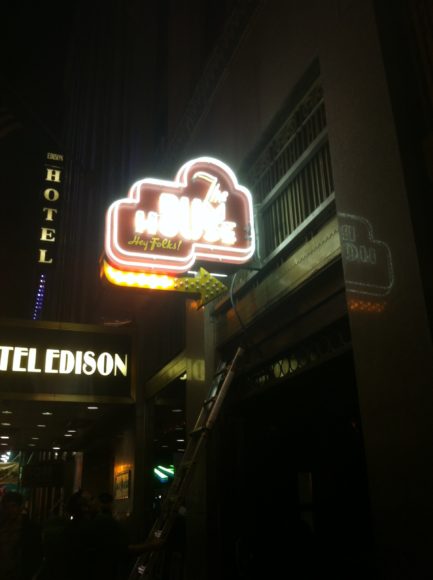 It can be tough to survive the rigors involved with maintaining a successful cocktail bar in New York City, particularly at a time when some bars have a way of making you forget that drinking is supposed to be fun. Places like Pegu Club, The Rum House and Lantern’s Keep are different; all shine with distinct personalities and they really aim to please. Each serves a roster of fabulous, well-crafted drinks, and while never losing their city edge, have a way of providing an oasis from the pulse of the outside streets.

Another common thread tying these three distinct New York City bars together is that they achieve this by paying strict attention to customer satisfaction. Their singular approach to success was highlighted at this year’s Manhattan Cocktail Classic (www.manhattancocktailclassic.com) in seminars held at these bars on consecutive days. Attendees were treated to some of what they offer drink-wise, and given a behind the scenes looks into what each does to keep the crowds coming back for more. 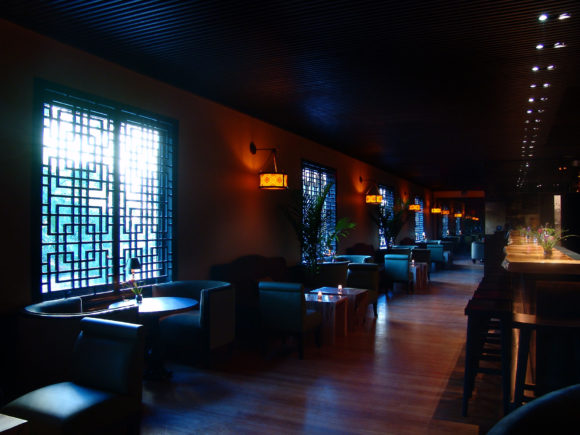 Pegu Club has been drawing in crowds since opening in 2005. The seminar, held here, titled Women Behind Bars, was led by an all-female cast of powerhouse bar professionals – Kitty Amann, Misty Kalkofen, Meaghan Dorman, Lynnette Marrero and Audrey Saunders – with an introduction by Francine Cohen. The overview of women bartending “from late Medieval England ’til now,” was a grand thesis arguing the case for female bartenders/bar owners serving a necessary customer need and how they’ve become key players in the future of the cocktail industry. (www.peguclub.com)

In the old days, women went from brewing as a required component of their domestic duties to operating the taverns themselves. However, throughout the ages, our “forebroads” had to fight for their place behind the bar, whether this was due to Puritanism, side effects from various temperance movements, a prevalent sexist stance, or a combination thereof.

No matter the circumstances, it was clear bars benefited from a female presence when possible. People such as “Dirty” Helen Cromwell of the Sunflower Inn in Milwaukee, WI (1926-1960), cultivated a consistently soothing and homelike atmosphere. During Prohibition, it was only open during daylight hours, served simply Old Fitz Bourbon or Scotch and, to level the playing field, all customers of every creed sat on rug-covered floors instead of chairs. Cromwell’s business thrived because it offered a clean, friendly alternative to the rather crusty male-dominated saloons of the era. Not to mention, the hours during which she operated, and her overall demeanor, kept her from being raided.

Traveling farther back in time, it was people like Ada Coleman who paved the way for modern women bartenders. While all credit turn of the century bar keep Harry Craddock for his legacy of cocktail recipes from the American Bar in the Savoy Hotel in London, it was Coleman who trained him. She invented the famous Hanky Panky cocktail which was enjoyed by repeat guests such as Mark Twain, the Prince of Wales and other male dignitaries. Her secret to handling male customers? “It’s easy enough to manage them if they think they’re managing you.”

Ladies such as Coleman, or “Coley,” as she was known, are a direct influence on Pegu Club’s Audrey Saunders who entered the business for the love of the craft, but also to ensure a future where people can, “walk into a bar anywhere and have an amazing drink.”

For Saunders, and many other modern day female bar professionals, being behind the stick is not about making money off a deliberately sexy attitude. Saunders advocates that it’s okay to refuse a shot with a customer, knows you don’t have to show your midriff and by all means, one should serve water with a smile if someone asks for it! She encourages women to “Carry yourself like a lady and keep on driving.” The end result is operating a comfortable, hospitable place for people to drink and socialize that encourages return visits.

The next seminar to highlight the “how to keep ’em coming back for more” proposition was Cocktails for the Rest of Us, led by Michael Neff and Damon Dyer at The Rum House (www.edisonrumhouse.com), the bar attached to Time Square’s Edison Hotel. Neff and his partners recently took over and refurbished this well-worn theater district saloon.

The “beautiful bones” of the bar had long been in existence (its actual age is a source of much debate), and the makeover, though physically demanding, worked around its inner strengths. But there was an even bigger challenge for Neff, who considers making “neighborhood” joints his specialty. He said, “This is the most famous neighborhood on the planet, which no one, but everyone, calls ‘home.’… All we wanted to do is put a good bar where there is no good bar.”

Even though its last manifestation had clearly been run into the ground, regulars and New York purists in general were vehemently opposed to Rum House’s changing of hands, and it was up to Neff and company to persuade all the people who hated them to love them. How? It takes three key steps:
1) Give them what they want.
2) Show them what you can do.
3) Offer something recognizable (other stuff comes later).

In an age of modern “speakeasies” with unmarked doors, the bar is indicated by a bright, flashing sign, as if extracted from a Bugs Bunny cartoon, saying “Hey Folks!” alongside an arrow pointing directly to the entrance. Scattered along the bar are several copies of their eye-catching menu, with a graphic homage to vintage theater, and approachable, classic items that serve as an intro to the house specialties. This is in contrast to their Tribeca sibling, Ward III, which has a decidedly more spare, choose-your-own adventure style to its menu, because most of its clientele already knows what to expect when they walk in.

Some Rum House customers don’t know what to do with a drinks menu, and when offered, say things like, “But I’m not eating.” Says Dyer, it’s often about engaging and “teaching people” about what they’re drinking. A certain “drink evolution” can be observed on hotel guests who make it their temporary local. The first night they come in for a vodka soda, and after observing the possibilities, the next time they might order a Moscow Mule, then a Dark and Stormy, and by their fourth visit, a Tortuga, a house rum invention. Dyer goes on to discuss the “epiphany” when someone tastes a fresh juice margarita for the first time and realize it’s not supposed to be neon green.

But not everyone has to drink the fresh juice Kool-Aid. The folks at The Rum House know some of their core customers just want a beer, and nothing too crafty either. The idea is to cultivate an atmosphere that caters to a crowd where “even local people are transient.” Something must be working, because for a community bar situated in a thrumming mobile landscape, they have regulars.

A few blocks over, the newish Lantern’s Keep bar in the Iroquois Hotel (www.thelanternskeep.com) (www.iroquoisny.com) faces many of the same challenges as The Rum House. The seminar Checking In: Hotel Bars Past and Present, demonstrated that they take a slightly different approach to serving customers. This talk featured co-managers, the ever-busy Meaghan Dorman and Theo Lieberman.

It opened with tales of hotels yore, and vignettes about their sometimes lavish guest services. These included perks such as tableside bar carts in first class hotels that in effect made each table its own private bar. But it also included the once eponymous “brick” sandwich, stale evidence that served as necessary legal proof for inspectors of nutrition other than alcohol.

The main focus of the presentation, however, was to show how Lantern’s Keep maintains a perceived sense of value to its clientele, with pinpoint attention to everything from the menu choices, the layout and the Belle Époque style decor. Considering their location, they could get away with charging top prices for drinks. But they also realize they’re a destination bar for city residents, and so charge only slightly more than similar places downtown to maintain their NYC street cred. To ensure comfortable seating, there is no standing at the bar (there is often a waiting list for seats during prime hours.) This also perpetuates a steady service flow. The person making cocktails is never so completely in the weeds that guests need wait long for drinks. 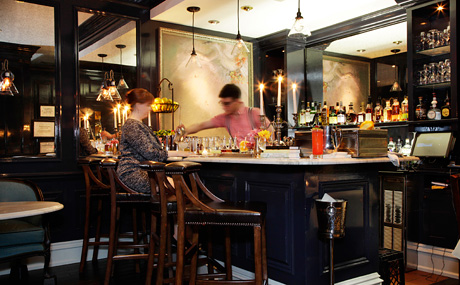 Bartenders are instructed to make drink rounds in a certain order as both an efficiency tactic as well as to prevent too much dilution from ice – the equivalent of not letting food stand too long under a heat lamp in a restaurant.

While Lantern’s Keep encourages conduct such as ordering off menu drinks, they don’t attempt to please all people all the time. The type of service they provide deliberately caters to a thirsty cocktail crowd with high-end expectations. It just happens to be located in a hotel in the midtown neighborhood. Unlike The Rum House, it doesn’t strive to be a neighborhood bar that happens to be in a midtown hotel.

What all three seminars explained is that people come to a bar to drink with certain expectations based on that bar’s culture. It’s up to those in charge of these establishments to set a tone, make people feel welcome, and also pick worthy battles (women through the ages just had to fight more of them.)

We are lucky to live in an age where we have many choices of what to drink, with the evolving prevalence of higher quality ingredients. But even a well stocked bar will repel customers if they’re waiting too long for drinks and feel unwelcome.

As was stated during Cocktails for the Rest of Us, at some point you might encounter a strip club in an airport. So what’s the harm in making that a good place to order a Sazerac?