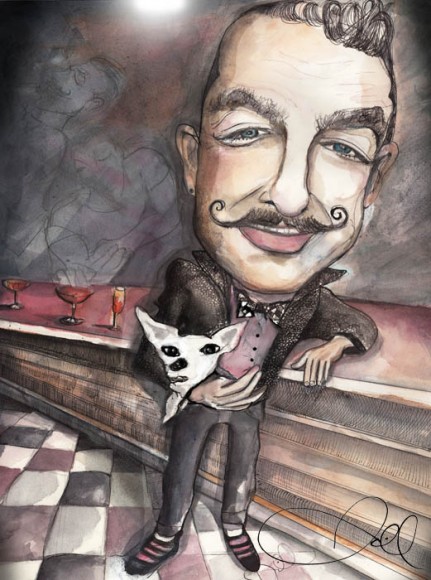 Wandering about the Loisada, marveling at the transformation of the neighborhood. I lived there thirty years ago, in a 5th floor walk up for which I paid $135 a month. Back in the day when Yerba Buena was something you surreptitiously procured on the street, lit up, and passed around to your buddies on the stoop.

I kept hearing about a wonderful little bar called Mayahuel and knew I must visit. Just as I was about to cross the street, I saw a familiar face. It was Miguel Calvo. I explain to Miguel my mission: I’ll take you there! says he.

So we walked up 6th street and entered this gorgeous little grotto of a bar, enveloped in exquisitely carved wood and mosaic tiled designs. Miguel ordered us two Palomas from the very capable bartender, Jose Mena, and they were sublime. He then began to tell me about his father, a story so richly woven, it could have been lifted from a Carlos Castaneda novel.

During the 1960’s, Miguel’s father, Wilfredo Calvo Bono, was an architect in Cuba who designed schools and hospitals. When he refused to join the Communist party, the government required that he work in the fields cutting sugar cane for two years. Finally permission was granted for him to leave the country. By this time his mother was seven months pregnant and would not have been allowed on the plane, so she wrapped herself in a girdle to hide her belly. Miguel was born prematurely soon afterwards. His parents immediately sought refuge with his aunt, “Auntie Doctura” a doctor who lived in Madrid. She took them in and there they lived for several years. During this time his dad, with no other means to support his family, began to make paintings to sell on the street. He painted one thing only and hundreds of them… mushrooms. Every single species of mushrooms that had ever been categorized –which he carefully rendered from a scientific volume he had procured. The paintings were small enough to fit into a suitcase. Tourists loved them and they sold extremely well.
By the time Miguel turned seven, they moved to Ohio, where his dad worked as an architect for many years. Now in his later years, his father has embarked on a most unusual project after receiving a grant from the Pollock-Krasner Foundation – creating Mondrian-like designs chalked onto football fields by tractor, then photographed from above in a plane!

Miguel has been working in the hospitality and design industry for most of his life, from owning his first place, Global 33, to designing Stephen Starr’s first restaurant: The Continental Martini Bar.
If you were lucky enough to have attended the incredible William Grant & Sons party at the World War II Museum last year during Tales of the Cocktail, you’ll understand that Miguel creates multi dimensional events that are nothing short of spectacular. “I love the soul of an event and dreaming them up.” He tells me. “I create events where the marriage of drink, food, and design galvanize peoples’ senses.”

While completing this profile, I learned that Miguel is setting off to Colombia to work with the Wayu Indians to develop designs that have been accepted for the furniture store, West Elm. It is evident that from a creative and adventurous father came a son who not only followed suit, but continues to expand the medium- and possibly even change some lives.

Favorite Drink: the Papa Doble. “While building the rum bar at Cienfuegos, I had the great fortune to hear Charlotte Voisey explain rums in great detail. She reintroduced me to the Hemingway Daiquiri and rums in general.”

Combine ingredients and shake well. Strain into chilled stemmed glass.
Garnish with a Marasca cherry and lime wheel on a pick.