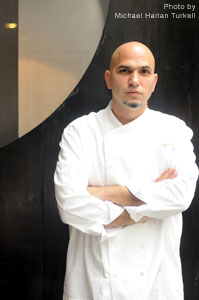 His journey moved from cooking beside his mother to waiting tables at T.G.I. Friday’s to cooking at Ecco, where The New York Times took notice, to opening Kefi and Anthos in 2007. Both places were designed to bring classic Mediterranean proteins and the powerful influence of Middle Eastern spice to the plate, and Greek food to the populace.
“I wanted to make Greek cuisine a weekly choice for people – similar to Italian,” Michael Psilakis says, “In the way it has become American and Americans recognize it.”
To say he was successful is an understatement. In 2008, Anthos was awarded a Michelin Star, one of only two Greek restaurants in the world to hold that honor, and Psilakis was nominated for a James Beard Award in 2008.

“I think there are moments in life that change you,” Psilakis admits today. “My son’s birth and my father’s passing have affected me tremendously in last few years. Before, I thought only about food. I was in a kitchen, with my head down. Food has now changed for me psychologically.” With the passing of his father recently, Psilakis began writing as a form of therapy. The pages he wrote to work through his grief have now been transformed into a cookbook entitled How to Roast a Lamb which is filled with memoirs and recipes.

And Psilakis’ approach to cooking has changed; it’s evident at his latest spot, Gus & Gabriel. He explains, “I always knew my mom used food as a vehicle to gather family and friends together. We had dinner every night as a family, and the women looked at food as a gift. They really wanted to see the people they were feeding experience joy. My father used food as a vehicle to teach lessons about life. I knew that I spent a lot of time with him with food, but I didn’t realize at the time that he was teaching me life lessons.”

Gus & Gabriel is named for Psilakis’ father and his son, and it’s a move away from Greek cuisine into American, exploring this new philosophy of food as a vehicle to access memories and recall life lessons. “What we do in our kitchens involves technique. But it’s also a story we are trying to tell,” he says. “For example, the first Easter after my dad passed, my mom and I were roasting a lamb on a spit and my son was there with me. When it came time to season the lamb, my dad would pour water on my hands. I got ready to pour water on my son’s hands, and I saw they were my hands 30 years before. My dad had done that with his father before him. That’s the importance of food.”

At Gus & Gabriel, Psilakis is teasing the inner child in all of us. Rich comfort foods we grew up on – mac & cheese, burgers, and even adult, spiked milkshakes – are elevated, “so you can journey back to a time that was more joyous and less responsible,” Psilakis says.

“Food is the seed you plant which allows a bloom to occur later on in life. You can revisit a time where you can find peace, growth or joy, and I aim to offer that at Gus & Gabriel – at all of my restaurants.”