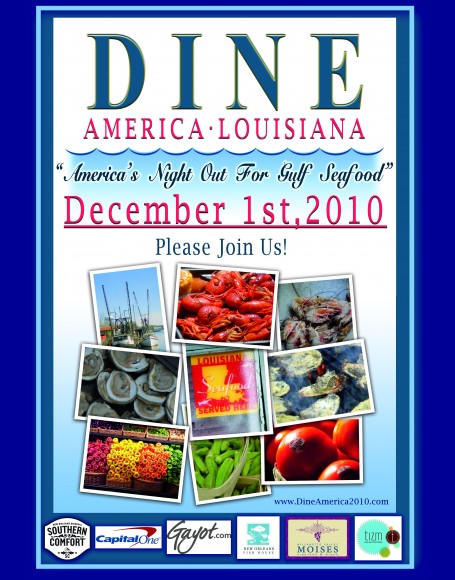 You dine out for all sorts of reasons – because you’re hungry, you or your significant other don’t want to cook tonight, friends and family are in town, you’re craving that dish that keeps you returning to your favorite restaurant despite the fact that service is slow.

Today there’s another reason to dine out – to join your fellow chefs and restaurateurs who are making a statement by serving Gulf Coast Gulf products and supporting Gulf Coast Fishing families and their Gulf Coast seafood catch.

You may or may not have your restaurant signed up to participate in Dine Out America/Dine Louisiana this evening, but after eating out tonight and lending your support by picking up the check know that you can pick up the charge on of many nights ahead when there will be opportunities for you to join the extensive list of the hundreds of chefs around the country who continue to rely on Gulf Coast seafood post-BP oil spill and proudly serve it to their guests. Each participating chef will be serving a dish that includes fish, shrimp, crab or oysters fished from the Gulf of Mexico, which supplies nearly half of all of this country’s seafood.

“It’s so important that now, two years after Hurricane Ike, and only months after the oil spill, that we continue the revival of our post-storm community,” says Alex Brennan Martin, President Brennan’s of Houston (www.brennanshouston.com). “We are so happy to be able to participate in a national event to support and promote Gulf seafood as the safe, healthy and delicious product it has always been.”

To get involved now (even if you can’t eat out tonight) the TIZM online auction site (www.tizm.com) will have donated cookbooks, dinners and other prizes on the block with monies raised to support the Louisiana Community and Technical College Foundation for culinary programming and education.

***Though you’re probably not going to be dining at The White House this evening we thought you’d like to know that Executive Chef Cris Comerford has Gulf Seafood on the White House menu today and throughout the holidays.
Below is Cris’s blog post about Gulf seafood.

A Taste of the Gulf at the White House
Posted by Cris Comerford on December 01, 2010 at 10:00 AM EST
Today, hundreds of restaurants all across the country are celebrating “America’s Night Out for Gulf Seafood” by serving shrimp, oysters, crawfish and other Gulf Coast delicacies. Since the BP Deepwater Horizon oil spill, consumption of Gulf seafood has dropped, which is why we at the White House are so happy to play our part in reminding Americans that Gulf seafood is not only safe – but delicious. (In case you missed it, check out President Obama enjoying some seafood himself at a crawfish boil in Louisiana back in June and a video of the New Orleans Saints cooking up a gulf seafood storm in the White House kitchen.)

Gulf seafood has a special place in my heart – and not just because it’s truly some of the best seafood in the world. In September, I traveled to Louisiana to learn about the work done to ensure the safety of the region’s seafood. Since day one, the Food and Drug Administration (FDA) and the National Oceanic and Atmospheric Administration (NOAA) have been working with other Federal agencies and state officials to closely monitor seafood in the Gulf and ensure that the seafood that makes it to your grocery store or restaurant is safe to eat. I also gathered local chefs and chefs from around the country to cook seafood for a block party for the residents of St. Bernard Parish who returned after Katrina. At that party, I had the honor of surprising one resident who walked into her new home for the first time since the disaster, greeted by the smell of homemade seafood jambalaya.

I’m excited to use the power of food once again to honor not only the Gulf, but some very special guests. Tonight, the White House is hosting a holiday reception for the volunteers who worked so hard over the Thanksgiving break to put up our beautiful decorations. And at this event, we’ll be serving our guests a seafood bar highlighting Gulf shrimp and Florida stone crabs. All together, we’ve shipped in about 2,000 lbs of shrimp and crabs from the Gulf for our 2010 holiday parties.

The celebration of the Gulf doesn’t stop in my kitchen either. The White House Mess today has a menu overflowing with seafood from the Gulf, including:

And for you to enjoy a taste of the Gulf at home, here’s my Gulf Shrimp Cocktail recipe that I’ll be serving at the White House holiday parties.

Add the vinegar, salt and a halved lemon into a large pot of boiling water. Add the shrimp, and cook for about three minutes, or until the shells turn pink. Remove with a slotted spoon into a bowl of iced water. When the shrimp are cool enough, peel the shells and devein. Keep refrigerated until service. For the cocktail sauce, combine all the remaining ingredients and set aside.