Culinary all-stars are at it this Sunday and you can be there.  VIP style. 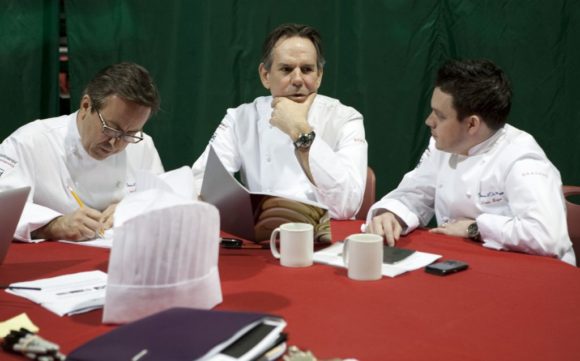 The battle for USA’s world domination in the 2013 Bocuse d’Or competition begins at home this Sunday as four highly qualified contestants pit their skills against one another in the Bocuse d’Or USA Foundation’s USA Finals Competition.  The winner will be attending the big dance in Lyon, France next January and representing the USA.

“This weekend is about selecting the very best American chef to represent the USA on the international stage. It should be a matter of great pride to our entire American culinary community,” said Chef Daniel Boulud.

But, as always, INSIDE F&B has a special inside track for you. Courtesy of Nespresso, a 2012 Member Sponsor of the Bocuse d’Or USA, two tickets in the comfortable VIP section are available for the first person to correctly tell us the number of grand crus offered by Nespresso to their fine dining and hotel customers.(For a clue take a look at www.nespresso.com/pro).

As business tool for the culinary world Nespresso is thrilled to get behind this competition that demands the same exacting standards as their regular customers.  Jim Frisby of Nespresso Business Solutions notes, “Nespresso offers a range of Grand Crus from Ristretto, to Espresso to Lungo to Decaffeinato, all of which are delivered via a portioned system ensuring cost control, no waste and no clean up.  We’re provide our expertise with state of the art, stylish reliable equipment and deliver premium quality espresso coffee to satisfy the most discerning of palates.” 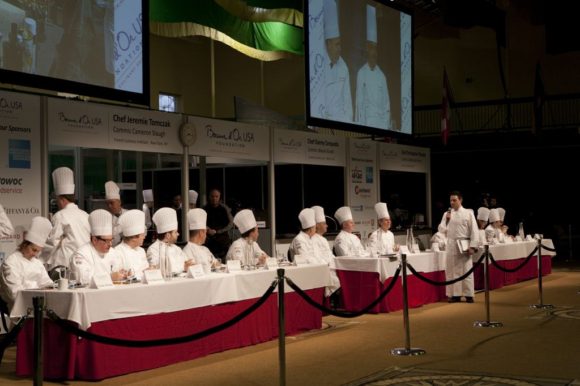 There are going to be quite a few discerning palates judging Sunday’s competition which starts at 8:00 a.m. and runs until 2:45 at The CIA (www.ciachef.edu).  Expect to see Grant Achatz, Scott Boswell, William Bradley, Michael Cimarusti, Shaun Hergatt, Gabriel Kreuther, Barbara Lynch, George Mendes, Roland Passot,Michael White and Alan Wong at the judges’ table.

The first ever Bocuse d’Or USA Commis Competition is being held on January 28, 2012

The CIA will also host the first ever Commis Competition on Saturday, January 28, 2012. As part of this competition, four talented young chefs will each prepare their interpretation of the classic Paul Bocuse dish, Poulet au Vinaigre. This new event aims to identify the country’s next rising star in the field of competitive cooking. While the winner of the Commis Competition will not participate in the 2013 Bocuse d’Or (the USA representative chooses his own commis to assist him), the hope is that the winning chef will gain experience to one day represent the USA at the Bocuse d’Or.

Chef Boulud concludes, “The first-place prize is a three month professional apprenticeship at a three-Michelin-star restaurant in France. The prize really underlines the Foundation’s goal of providing continuing education. It’s what I’m most proud of in the Foundation’s progress.”

Established in 2009, the Bocuse d’Or USA Foundation is a non-profit 501(c)(3) devoted to Inspiring Culinary Excellence in young professionals as well as preserving the traditions and quality of classic cuisine in America.  The Foundation – led by a Board of Directors comprised of renowned chefs Daniel Boulud, Thomas Keller and Jerome Bocuse – aims to build a community of young American chefs who are confident in their career pursuits and will be life-long ambassadors of gastronomic excellence.  The organization offers educational scholarships, internships, access to a Culinary Council of established professionals and support for the most promising young professionals who are interested in representing the U.S. in the prestigious Bocuse d’Or competition held in Lyon, France every two years.  For more information, visit www.bocusedorusa.org.