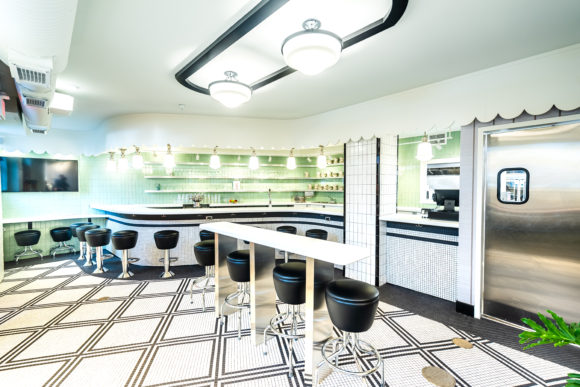 As COVID-19 continues to control the country, businesses are on life support, scrambling to pay the bills and employees. The allocation of $2.2 trillion in the Coronavirus Aid, Relief and Economic Security (CARES) Act neglected most of the hospitality industry, many of which are struggling to keep their doors open while Americans stay home.

In particular, the portion of the CARES Act known as the Paycheck Protection Program (PPP) designed to support small business seems to be failing most independent bar owners and restaurateurs. All too quickly the $349 billion provided for this program dissipated, and the few businesses that received support from the program do not find themselves in a much better position than they previously were in.

Which is exactly what concerns the Food & Wine Best New Chef and James Beard Award-winning chef Andrew Carmellini as he sees the financial aid programs roll out and restaurant operations severely restricted or closed altogether. This seasoned operator, whose restaurant group includes such NYC favorites as Locanda Verde, The Dutch, Lafayette, Bar Primi, and The Library at The Public, shares, “The PPP doesn’t put us as operators in a better position than we were, and I’m not sure it will put employees in a better position.”

A recent survey conducted by the James Beard Foundation reflects that Carmellini’s colleagues are equally concerned. More than 60% of respondents cannot sustain a closure for one month and 75% do not believe they will be able to reopen after two months of government mandated closure.

For those 75% of respondents who are not confident they will be able to reopen in June— which marks the eight-week usage term set out by the PPP guidelines—this program would not help keep their businesses afloat.

Staying afloat once COVID-19 hit wasn’t even a question for Wake the Dead, a popular breakfast spot in Lawrence, Kansas, which closed its doors on March 20. Fearful about her underlying health conditions, owner Rachel Ulbrick did not want to endanger herself by coming to work, and the PPP did not offer a feasible solution to temporarily closing. “I already have a fair amount of debt. Even though [the loan] was like zero percent, in three years it wouldn’t be. And that would add $20,000 on top of whatever debt I already have; I can’t do that,” Ulbrick said.

The remaining 25% of respondents who believe they could reopen in June face a secondary issue, though: actually receiving the initial loan. The CARES Act provides close to $349 billion in aid to small businesses through the PPP, but was designed to be distributed on a first-come-first-serve application basis.

On the first day applications could be submitted, April 3, $4.3 billion of the $349 billion available in loans was immediately allocated and banks began limiting applications. Wells Fargo was the first; they announced they would not consider loan requests submitted after April 5.

With the early April dates behind us, and PPP filings not a possibility for some, there are other avenues within the CARES Act to pursue, such as new unemployment benefits. In addition to the current standard weekly unemployment payments, supplemental payments of $600 per week are provided as part of the Federal Pandemic Unemployment Compensation measure in the CARES Act. For self-employed and gig workers, they also qualify for extended 39-week benefits, which is 13 weeks more than normal eligibility.

While the supplemental payments are a help to many workers filing for unemployment, the unemployment websites and offices have been overwhelmed and the process can be slow, clunky and confusing. Some checks began going out to unemployed New Yorkers in early April, but Missouri did not plan on doing so until April 12, and Indiana residents may have to wait until as late as April 20.

No matter whether you’re in a state that makes provisions for unemployment payments early or later this month, there are some workers who may not even qualify for unemployment benefits. Even for those a stone’s throw from the Capitol, who count amongst their guests the same legislators who passed the CARES Act, restaurants like Buffalo & Bergen were not immune to being left high and dry by unemployment. Gina Chersevani, who founded and owns both the Buffalo & Bergen at Union Market and the newest on Capitol Hill which opened just weeks before the country shut down, explains, “We just got rejected. Out of 26 people from my one location that applied [for unemployment], only two were accepted, both not tipped employees.”

Chersevani also feels that insurance companies are failing the industry just as unemployment isn’t there for so many of her employees.

Chersevani is not the only owner in the hospitality industry who has had this issue, and, as a result, some restaurants are getting together to file class action lawsuits against insurance companies. Wolfgang Puck, Dominique Crenn, and a handful of other famous chefs have created the nonprofit foundation We Are BIG (Business Interruption Group), which is threatening to bring legal action against insurers who do not start paying insurance business claims.

According to founding member and chef Thomas Keller’s statement on the organization’s website, “The restaurant industry is the largest private sector employer in America…We need insurance companies to do the right thing and save millions of jobs.” 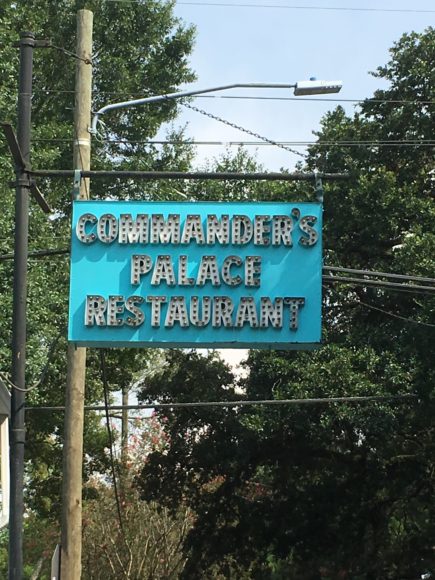 Many restaurant owners are in agreement with Keller and the other chefs taking legal action against insurance companies. Longtime New Orleans restaurateur and co-owner of Commander’s Palace Lally Brennan shares, “I very much agree with the efforts by Thomas Keller and others [to take legal action] and have the law changed around, because that’s not what America is about; that’s abusive.”

This fear felt by restaurant and bar owners and staff is not unfounded. An analyst at UBS predicts that one in five restaurants could permanently close due to the outbreak, which would mean nearly 200,000 establishments are in danger. Thus far, about three percent of restaurants have closed their doors, despite the recently passed stimulus package, according to the National Restaurant Association.

In the wake of ongoing hardship and potential lawsuits due to COVID-19 related regulations, and the failure of programs that are not one-size-fits-all, the industry does what it does best — turns within to help one another, especially when lawmakers cannot.

“We currently are ignored by lawmakers, which has been true for as long as we can remember. Case in point, our independently owned businesses have not been given a substantive seat at the table during Congressional relief conversations,” Chefs Andrew Carmellini, Luke Ostrom & Josh Pickard said in an email urging others to sign their Relief Opportunities for All Restaurants (ROAR) petition.

Chef Guy Fieri and the National Restaurant Association Educational Foundation worked together to create a relief fund for restaurant workers who are struggling due to COVID-19. Their fund is raising money for those in need with one-time $500 grants. And big and small liquor brands like Jameson and actor Ryan Reynolds’ Aviation Gin have committed financial support to the USBG National Charity Foundation Bartender Emergency Relief Program’s Covid-19 Relief Campaign, which is offering needs-based philanthropic grants. Over a quarter million people have applied thus far.

Chef José Andrés is in week five of his #ChefsforAmerica campaign through his World Central Kitchen foundation. He has closed his restaurants, turning them into community feeding centers for people facing food insecurity due to COVID-19 related lost income. To date he has served 2 million meals.

Brennan and her cousin and co-owner, Ti Martin, are concerned about their team, many of whom have been with the iconic restaurant for more than a decade. They have been providing their recently laid off workers with food and other basic needs during the crisis, too. Brennan shares, “We gave away bags of vegetables and all the perishable items and things that we had cooked, and we’re giving away bags of toiletries and paper and paper towels and hand sanitizer. We’re doing all those types of things with the team to still stay in touch.”

Philanthropy for the hospitality industry is not just coming internally. Twitter personality Yashar Ali opened a GoFundMe to support restaurant workers. On his Instagram account he explains, “Restaurants have closed or are offering only takeout and delivery options, hotel business has slowed dramatically, and bars have been shuttered. As a result, people who rely on hourly wages (including those who rely on tips) are suffering, having seen their daily income all but disappear overnight, and for some already losing their jobs.” 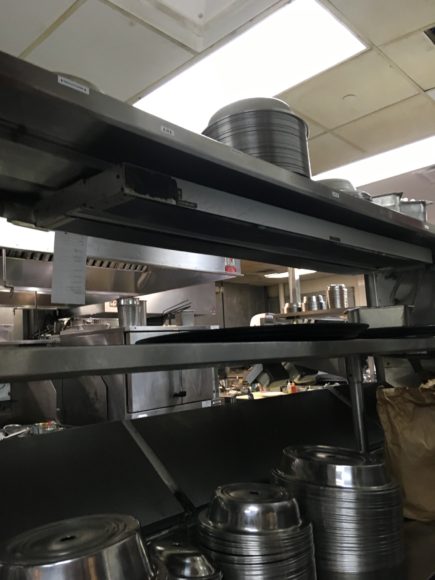 Ali has already amassed over $1.1 from more than 8,900 donors, surpassing his goal of raising $1.1 million to be directed to Tipping Point Community and Robin Hood, two established foundations long dedicated to serving those in need.

Independent bars and restaurants need help. The future of COVID-19 is uncertain, and so is the future of many restaurants and bars in the nation. While many owners have had to close their doors forever, others are trying not to follow in their footsteps. The hospitality industry should not have to rely on famous chefs and Twitter personalities to help keep their doors open.

These days, it feels like an insurmountable task as Gina Chersevani concludes, “We are risking our lives serving f**king sandwiches.” 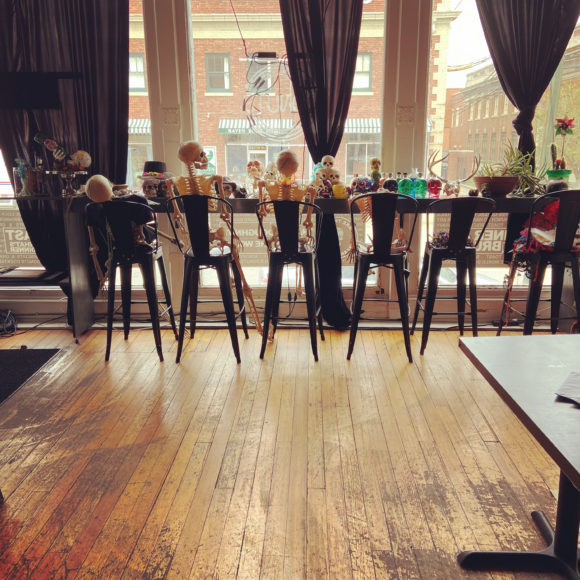 Photo courtesy of Wake the Dead