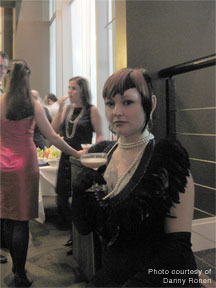 On December 5th, most people are concentrating on the upcoming holidays – vacations, time with family, shopping for gifts – but for those in the world of spirits, wine and beer, December 5th is a holiday in and of itself… Repeal Day. No, it’s not a made-up-excuse-for-imbibing-holiday, people – it’s a legitimate holiday which was celebrated this year in the cocktail communities of Washington, DC, New York, Miami, San Francisco, Los Angeles, Denver, Milwaukee, Portland and Seattle, just to name a few. Even door74, a speakeasy cocktail bar in Amsterdam, celebrated along with their American compatriots.

Repeal Day commemorates the ratification of the 21st Amendment to the U.S. Constitution back in 1933, ending the 13-year era of Prohibition. To some, it simply seems like a finale to a brief period in time (when a group of conservative folks decided they didn’t want anyone to have fun), but in reality, Prohibition damaged the then-burgeoning cocktail movement almost irreparably. This story does not end tragically, however, due to the strong resurgence of cocktails, much of which occurred just within the past decade. Classic cocktail recipes have re-emerged, spirits and bitters thought lost have been recreated and the craft of the cocktail itself has blossomed and seemingly surpassed its pre-Prohibition glory. 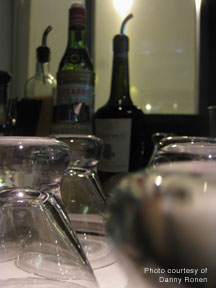 One group of modern-day mixology superheroes (read that as “folks who are fun”) in our nation’s capitol are just some of the proponents of reminding us that Repeal Day is a true holiday. The aptly-named DC Craft Bartenders Guild threw their second annual Repeal Day Ball on December 5, 2009 at PS7’s in Washington, DC, bringing together talented bartenders and cocktail aficionados from all over the eastern seaboard and beyond.

Gina Chersevani is one of DC’s mixologists who work hard to improve cocktails in The District. Gina is known as “The Mixtress” at PS7’s (no kidding, folks, it even says it on her business card), the location for this year’s Repeal Day Ball – she spearheaded this year’s event. Peter Smith, PS7’s Chef/Owner is known for his pairing menus, so Gina worked with him to specifically create a menu which would perfectly pair food and cocktails for the event. Peter cooked several of the dishes with the spirits made available to him, such as Plymouth-cured Pork Belly BLTs, Scallop Boudin with Tres Generaciones tequila-infused Peach & Ginger compote, Bleu Cheese Fondant with St-Germain Elderflower Liqueur and even two sauces using Lustau sherries.

Like the Hall of Justice calling out to superheroes, Gina sent messages to a handful of first-class mixologists from DC and beyond to come up with cocktails based on the specific spirits and flavors she and Peter created. The team Gina assembled included Adam Bernbach (Proof, DC), Dale DeGroff (King Cocktail, NY), Dan Searing (Room 11, DC), Derek Brown (The Passenger, DC), Owen Thomson (Bourbon, DC), Rachel Sergi (Againn Gastropub, DC), Tad Carducci (Tippling Bros. Consulting, NY) and Todd Thrasher (P/X, Restaurant Eve, The Majestic). This team of cocktail greats from DC and NY drew a crowd, with cocktail enthusiasts and industry professionals alike taking planes, trains and automobiles (thank you, BoltBus) to take part in this experience, dressing in their best 1930s attire.

Even with the unexpected cold snap and minor snow storm, it was worth the trip. Not only were the cocktails fantastic as expected, but they ran the gamut from delicate-and-up to hefty-and-on-the-rocks, plus there were even a few punch bowls, some of the evening’s favorites (which went strangely well with the tuna tartare sliders). One of the more interesting spins was Adam Bernbach’s Pisco in Winter, which was butter-infused Macchu Pisco, a homemade citrus-spice syrup and hot water, with Angostura-cinnamon marshmallows on the top, of course. This inventive concoction was an exquisite antidote to the 25ºF temperature outside.

(see below for cocktail and food menus)

To top it all, the folks in DC asked repealday.org creator Jeffrey Morgenthaler from Portland, OR to emcee their event. Morgenthaler was an easy choice, as he was an early advocate for the celebration of Repeal Day, stating that it is a holiday for anyone and everyone who enjoys their Constitutional right to imbibe – patriots and deviants, unite!

2,400 miles away in Sin City, another group of cocktail champions put together a Repeal Day event, flapper dresses and fedoras and all. BarMagic of Las Vegas created a stellar cocktail menu fitting the occasion which included classic libations from the Savoy Cocktail Book, original cocktails from BarMagic of Las Vegas and Employees Only (NY), as well as Ian Fleming’s famous Vesper cocktail from Casino Royale.

All in all, all the work which went into the events around the world yielded successful soirees and fine tributes to the holiday that is Repeal Day. Time to start planning for next year…

Take away some lessons learned from the Temperance Movement which led to Prohibition – there will always be those who are looking to repress society in some way, and in general, those people are no fun at all. But as long as there are those who remember, who commemorate their Constitutional right to drink alcoholic beverages, the fun will always prevail. Thanks, Cocktail Superfriends for saving the day!

COCKTAILS CLEAN UP FOR CHARITY