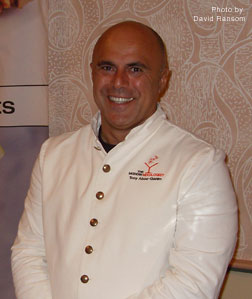 There’s one ingredient that Tony Abou-Ganim won’t leave out of any cocktail he makes. You can’t buy it, but he thinks no drink should be made without it   It’s not a secret either; he’s happy to discuss it with anyone who wants to know what it is. Just ask him…

It’s no surprise he’s willing to let you in on his must-have ingredient.  You’d expect that from Tony, one of the world’s great mixologists. One conversation with him and you’ll know why he’s garnered the attention and accolades he has throughout his career,  which began behind the family bar, The Brass Rail, in Port Huron, Michigan.  Beyond his skill with spirits, Tony’s easy-going nature and soft-spoken confidence draw you in, making you want to know more about the ideas and philosophies of this child of the Midwest. He speaks with that unique quality of making you think you’re the only person in the room with him, and as you listen to him, his dreams soon become yours.

Was it always this way for Tony? Probably. You can see it in his eyes.

For generations, small-town America has been a breeding ground of dreams, and it was there in the heartland, in the heart of a working class Lebanese-American family, that the dreams of Tony Abou-Ganim were born and nurtured.  His formal introduction to the bar business came about during a college break spent working for his older cousin, Helen David, who ran The Brass Rail. Under her tutelage, and against her wishes, “Helen never wanted me to be a bartender,” Tony recalls, he immediately took a shine to the craft, creating and re-creating cocktail classics alongside his uncle Charlie and cousin Tony (who he is named after), gaining experience and learning the details of mixed drinks and their culture, that have made him one of the world’s most sought-after authorities on the art of the cocktail.

Armed with a new passion and extensive cocktail knowledge, a thoroughly hooked Tony made his way to San Francisco to help his friend Harry Denton open his soon-to-become-legendary Harry Denton’s in Fog City.  Subsequently, when Harry was tapped to open the Starlight Room atop the Sir Francis Drake Hotel near Union Square, it was Tony he went to, to design his cocktail list.   It was from that collaboration that one of mixology’s most recognized and endearing cocktails, the Cable Car, was born.

This landmark drink, was introduced around 1996, as the cocktail culture was just starting to gain momentum.  Hearing that Tony was putting together a “cutting-edge” list of new and different cocktails for the Starlight Room, the Seralles Family, then owners of Captain Morgan Rum, approached him to create a cocktail based on their famous spiced rum, which happens to be the world’s second largest selling rum after Bacardi.  After researching some old cocktails, Tony created the Cable Car, loosely based on the classic Brandy Crusta, a cocktail credited to New Orleans’ Joseph Swinton, who ran the New Orleans City Exchange Bar in the 1850’s. “There’s a saying in the bar business,” says Tony, “There really are no new cocktails, just newer versions of old ones.”

Along with the success of the Starlight Room and the rise of cocktail culture, Tony’s star was also on the rise.  As Steve Wynn began putting together his team to open the Bellagio in Las Vegas, he hand-picked Tony to run the hotel’s cocktail program.  “I almost didn’t include the Cable Car on the Bellagio list, but acquiesced at the last minute,” remembers Tony. Smart move, as the Cable Car went on to become one of the Bellagio’s most requested cocktails (and still is), and in doing so, launched Tony into the royalty, along with the likes of longtime friend Dale DeGroff and mentor Harry Denton, of America’s cocktail culture.

Still based in Las Vegas, Tony now focuses on marketing his own cocktail consulting venture, The Modern Mixologist, designing cocktails, lists, and his own line of high-end bar accessories called TAG Wear.  A highly sought after speaker on the cocktail and foodie events circuit, making appearances and hosting and judging competitions all over the world, Tony is also the National Ambassador of the U.S. Bartenders Guild (www.usbg.org), a member of the Museum of the American Cocktail in New Orleans (www.museumoftheamericancocktail.org), and the consulting Mixologist for Crystal Cruise Lines. His first book on the art of mixology, “The Modern Mixologist, Contemporary Classic cocktails” will be released in February 2010.

I caught up with Tony in Lake George, NY this past Fall, and got a chance to ask him a few questions:

Q. A dozen questions Tony, not including this one. You ready?
A: Yes.

Q: White spirits or brown?
A: Seasonally, both. Whites in the warmer months, and browns in the colder. All open to experimentation, of course.

Q: Cubed ice or crushed?
A: Depends on the drink. Imagine a mojito with cubes in it…

Q: Do you have a favorite ingredient?
A: Campari. Done!

Q: Favorite glassware?
A: All I can say is that, for a nickel more, you can go first class. Don’t ever skimp on glassware.

Q: What do you see as the next big trend in cocktails?
A: The resurrection of lost classic cocktails. We have ingredients now, like genever and  elderflower liqueur, that were either not available for a long time, or never before.  I’m looking forward to where we can take them in the future.

Q: Do you wear an armband?
A: Umm… I have big fore-arms, and have never been able to find a good fit…Not that    I’m against them, but no, I don’t wear one.

Q: Do you have a still?
A: Yes, for training purposes only… Didn’t you see my Iron Chef America Competition: Battle Mango with Mario Batali, where I distilled a mango spirit on-set?

Q: Speaking of Mario, I see you wear red Crocs. Are red Crocs to Tony Abou-Ganim, what orange Crocs are to Mario?
A: I have to admit, that my back and I owe a deep debt of gratitude to my great friend     Mario for turning me on to the pleasures of foam footwear.

Q: What do you think of cocktail dinners?
A: While I’ve done them, I think it’s a difficult pairing to do well.  Personally, I would     never start a meal without a cocktail, but like to pair my actual food courses with wine.    According to the Spanish, wine IS food. They make a lot of wine in Spain, so that says something.

Q: Is there a cocktail you’ve had recently, that just blew you away? If so, whose was it, and where did you have it?
A: Julie Reiner’s Hibiscus Swizzle from the Flatiron Lounge in NYC. I’m a repeat offender on that one. Its incredible flavors and perfect balance never ceases to amaze me.

Q: Lastly, what is that secret ingredient that you think makes a perfect cocktail?
A: Putting yourself into it.. As a good friend of mine says, “A cocktail made without love, is just a mixed drink.”

Hint: To sugar-cinnamon frost a cocktail glass, first chill the glass, rub the rim’s circumference approximately ¾ inch in depth with a lemon wedge, then dip into a bowl of superfine sugar – (regular granulated sugar does not adhere as well).

For more on Tony, go to www.modernmixologist.com