Viva Mexico! Don’t let those border town drug wars get you down. Mexico is plenty safe for travel right now if you know where to go. Still unsure? Or just don’t have the time to get away? Well, just because you can’t actually leave home to take a summer vacation doesn’t mean your summer fiesta can’t transport you to Mexico. And it will when you crack open one of these two new Mexican cookbooks that bring traditional small plates and more to your next bash (piñata optional). 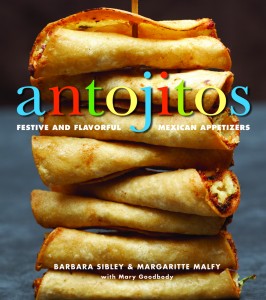 ANTOJITOS – Festive and Flavorful Mexican Small Plates By Barbara Sibley and Maragaritte Malfy with Mary Goodbody
New York City Restaurateurs Barbara Sibley and Margaritte Malfy introduced La Palapa to New Yorkers over a decade ago. Since then, their locations in the East and West Village have been a destination for traditional Mexican cuisine which harkens back to the foods Sibley enjoyed growing up in Mexico City. The women’s mission for the restaurant was to, as Sibley says, “Bring Mexico to New York and offer things you would eat in someone’s home.” Sibley comments on the restaurant’s décor noting, “we wanted people to have a mini vacation, under the tranquil shade of a palapa. We wanted people to feel like they were in Mexico.” Now, with the recent release of Antojitos booking a trip to Mexico isn’t necessary; these small bites enjoyed under thatched roofs can be served at home – even if you don’t actually have a palapa.

Palapa and a beach available or not, there’s no reason not to explore these foods for your next party or evening in. According to Malfy and Sibley, “The word antojo means ‘craving,’ which explains the name of these tasty, fresh bites. In some parts of Mexico, an antojito is called a tentempie, roughly, ‘a snack that keeps you standing’ – in other words, a bite to tide you over until your next meal. These snacks are typically eaten out of hand or from a small paper cone or cup while standing or walking around [marketplace stalls and town plazas]. Although antojitos are not usually considered a full meal by Mexicans, they can be so bountiful and delectable that there is no reason not to add a margarita or a beer and declare an assortment of them a suitable supper. Perhaps what we like best about antojitos – beyond their sheer deliciousness – is that several served at one time can transform any gathering into a festive occasion.”

In a shallow bowl, mix together the cheese and chile powder. Set aside.
Remove the outer leaves and silk from each ear of corn, leaving a single layer of leaves to protect the kernels.

In an 8-quart stockpot, bring the water to a boil over high heat. Add the sugar and salt and stir to dissolve, then add the corn. When the water returns to a boil, let the corn cook for about 5 minutes, or until tender.

Meanwhile, prepare a medium-hot fire in a charcoal or gas grill. Before igniting the grill, lightly coat the grill grid with vegetable oil spray to prevent sticking.

Using tongs, lift the ears of corn from the water, pausing to let the excess water drain back into the pot. Wrap each ear in a sheet of aluminum foil. Place the foil packets on the grill grid, and grill for about 10 minutes, turning every 3 minutes, until the kernels are lightly browned. To check for doneness, partially unwrap 1 ear and check the color. Remove the ears from the grill, and then remove the foil.

Pull the leaves down to create a handle for the corn. Rub the lime halves over the kernels, then spread the mayonnaise evenly over the kernels. Coat the ears with the cheese mixture and serve right away. 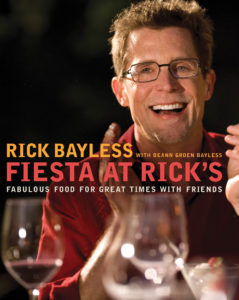 Chicago may be the home of the Bears and known as The Windy City, but one of its proudest calling cards is having celebrated chef Rick Bayless in town.

Bayless, noted for introducing America to regional Mexican food in an appealing way that they could understand and appreciate, has just released Fiesta at Rick’s – his sixth book about the cuisine of the land he’s grown to love so dearly. This latest book is designed with easy planning in mind – each chapter comes complete with an equipment list, timeline and serving suggestions in addition to his easy to follow recipes.

One signature dish (among many) Bayless has put on the map is his ceviche. He says, “Nothing so easily transports my spirit to a dreamy, sunny beach – even on the bleakest of Chicago winter days – like a bracing bite of ceviche. Nothing but ceviche does the trick, whether we’re talking a classic lime-drenched mouthful of succulent fish, marinated from pristine raw fillet punctuated with crisp white onion, green chile, cilantro and tomato, or something more contemporary with fruit, a variety of seafood, maybe dried red chile.”
Below, see Bayless’ ceviche that has a special place on the menu at his restaurant Frontera Grill and keeps him warm in the winter.

1. In a large nonreactive bowl combine the fish, lime juice and onion. The fish cubes should float freely in the juice: if they don’t, add a little more juice. Cover and refrigerate until the fish is as ‘done” as you like: 30 minutes to an hour for medium-rare, 3 to 4 hours for “cooked” all the way through. If you’re planning to serve your ceviche on chips or tostadas, tip off all the lime juice; to serve in dishes or glasses, tip off about half the juice. (Sad to say that the juice is fishy tasting at this point and can’t easily be used for another preparation or another round of ceviche. In Peru, however, they season, pour it into shot glasses and serve it as sangre de tigre – tiger’s blood.)

2. In a mini food processor, process the green chile(s) and olives until finely chopped (or finely chop by hand). Add to the fish along with the tomato, jicama (if using), cilantro and olive oil. Stir well, then season with salt (usually about a scant teaspoon) and sugar. Refrigerate until ready to serve – preferably no longer than an hour or two. Serve the “dry” version with the chips or tostadas for your guests to use as a little edible place; serve the “wet” version in small dishes or glasses.

MASTER OF YOUR DOMAIN