The Art of Pairing Food and Craft Beer
By Francine Cohen 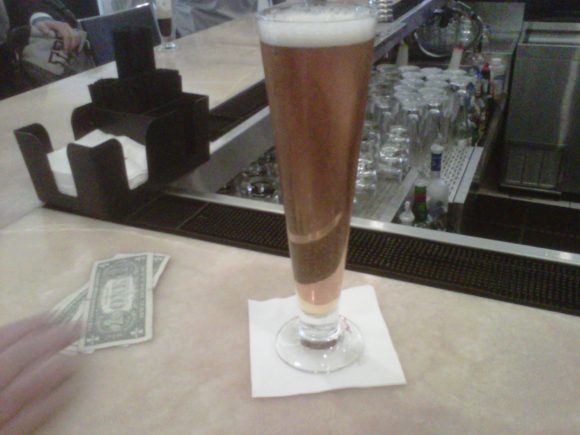 Beer, in a stream of consciousness sort of way (putting winter coats at the back of the closet usually coincides with the opening of baseball season, which inevitably leads to hankering for a mustard slathered hot dog washed down by an ice cold brew), has held a seasonal place in our hearts and on our menus.

But really, why are we still relegating it to that Take Me Out To The Ballgame… time of year when throughout all four seasons there are so many styles of beers being brewed, and most of them can pair as well with almost any cuisine as wine does? This seasonal beverage changing of the guards has to stop. Year round pairings of craft beer with food opens up all sorts of dining options for guests, and potential revenue streams for bars, and restaurants; just two good reasons to go beyond the pale and dive into new territory.

Plenty of chefs around the country are embracing beer, going beyond the traditional food pairing options of looking only at distilled spirits and wines, and exploring the possibilities that this other bubbly drink has to offer. A couple of weeks ago 22 people dove for an opportunity to fill the seats available at The Mermaid Inn’s (www.themermaidinnnyc.com) Bivalves and Beer pairing dinner, Sure, it doesn’t sound like a large number, but don’t focus on the number of people who bought tickets; instead, focus on the fact that this dinner sold out in an hour. In just 60 minutes The Mermaid Inn had a house guaranteed to be packed on a Monday night with beer lovers who had committed their time and their dollars to the restaurant that evening. That’s a pretty big draw on what is traditionally a slow night. And it proves that guests have a desire to explore a variety of international beer styles with the cuisines they love.

That international pairing journey is an unexpected one. The old rules about using terroir as your divining rod don’t hold true when it comes to brew since so many American brewers are making great Belgians, British ales and Euro lagers and, according to Greg Hall, Brewmaster at the award winning Goose Island Beer Company (www.gooseisland.com), one of the best West Coast IPAs comes from Scotland. He elaborates, “You can’t assume beer and food from the same country are always the best match. I much prefer a beer with some sweetness, perhaps a Belgian Pale or a brown ale, with spicy cuisines (Mexican, Indian, and Thai) that typically get paired with local pale dry lagers. The malty sweetness absorbs the heat and lets the flavor of the pepper through, enhancing the dish rather than just offering refreshment.”

A refreshing look at pairing will make guests love the new beverage pairing concept even more and they’ll latch onto your enthusiasm about guiding them them through the experience. Unlike wine which has a reputation for being elitist and over complicated by stuffy men with tasting cups hanging around their necks who can be intimidating, beer has a laid back attitude associated with it which makes picking the right beer a fun adventure in the dining room or at the bar. Hall insists that there are no hard and fast rules for pairing but offers some suggestions as to how to approach the combination as he explains, “Try to match flavor intensity; gentle beers with milder plates, robust beers with flavorful dishes. Matching flavor intensity is the best way to insure a good match. Try both complimentary flavors and contrasts to see what you like best.” He recommends, “I like Belgian style ales because of their complexity. Many balance sweet notes with some acid. Wheat beers often do well too, especially with milder flavors.” 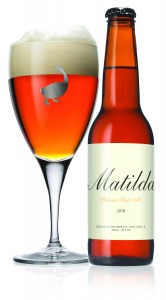 Chef Alexandra Guarnaschelli of Butter (www.butterrestaurant.com), and star of Alex’s Day Off on the Food Network (www.foodnetwork.com/alexs-day-off on Sundays and Tuesdays at 9:30 a.m.), admits to having previously had only a mild understanding of the versatility of beer when it comes to balancing out flavors. She says, “I am a great lover of Champagne. It has wonderful acidity but can also offer yeasty notes that I really love with food. I see beer the same way. It can offer sweetness, great texture and sour notes all at the same time. It also changes a lot when you drink it: the first taste, the aftertaste. I really like what the lingering flavor of beer can do when paired with the right food. Recently, I participated in a dinner pairing Goose Island beers with food at Gabrielle Hamilton’s wonderful restaurant Prune (www.prunerestaurant.com) in New York City. Some of the lighter-bodied beers were lovely with the vegetable-based and seafood dishes. The darker, slightly thicker and somewhat sour beers were wonderful with pork and I could see them with beef or duck just as easily. The last beer we drank was the most astounding. It had mulled wine and spicy notes that paired brilliantly with the chocolate dessert. I was surprised at how many different roles beer could play. I always perceived it to be a spirit category less versatile than wine, but I left feeling as if I had a whole lot of new homework to do on the subject of beer.

Washington, DC based Pastry Chef Zak Miller did his homework when challenged with creating a seasonal dessert which included beer. Miller’s dessert, which features milk chocolate, salted caramel, broken linzer, and a beer foam, was inspired by the desire to use local products in the middle of winter. He reached for a nut brown ale, but could have as easily used a stout instead as he explains, “You need something with character, but not too hoppy. Beer adds depth through some of the bitterness and other notes in the beer.”

Like Hall, Miller sees the food and beer pairing as a balance of flavor intensity. Miller continues, “You should take care to use a beer that matches and enhances the flavor profile of what you want to do. For example nuts paired with a beer that has nutty flavors and chocolate with a beer that has chocolate tones.” Hall concurs, “You need balance for a successful match. Hoppy beers struggle, especially with lighter dishes and spicy food as the hop flavor tends to dominate over the dish or intensify the heat in spicy cuisine.”

That said there’s nothing wrong with intensity; you (and your guests) just have to be willing to embrace it. For example, Hall recommends, “I love a good hop bomb with a big salty blue; the flavors open up on both, sweetness comes out and both the beer and the cheese sing. It’s brilliant! Beer is a natural match with fine cheese and many cheese makers (and every brew) prefers beer with cheese over wine.”

It make take a little while to encourage your guests to give up their vino when they’re ordering the cheese plate, but you won’t hear any whining from them, or from your accountant, when presented with the opportunity to explore more craft beer for less money than you’d spend on fine wine. Hall concludes, “Craft beer is so much more affordable than fine wine, it’s easy to load up on a bunch of styles and have fun! 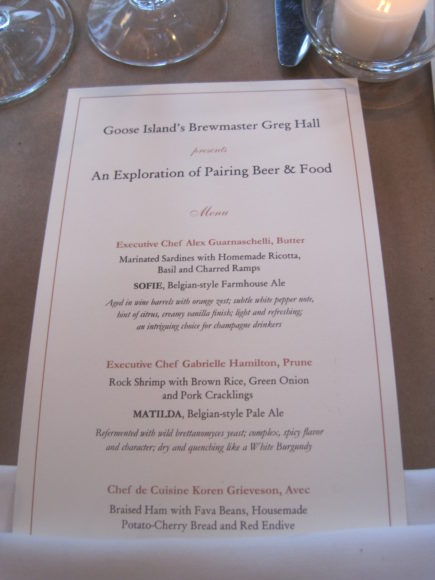 EAT WELL SO OTHERS CAN EAT TOO