Are you listening? In our previous article on music in restaurants and bars http://insidefandb.com/2010/08/meal-music/), several successful restaurateurs pointed out that a strong, structured playlist is a key element in defining the atmosphere and even the overall image of an eating establishment. If you’re still tossing whatever tunes strike your fancy onto your sound system, it’s time to start taking your music programming seriously.

Lori Hon of Gray V, (www.grayv.com), which curates music for restaurants, hotels and retailers, says that means designing a playlist that fits your restaurant’s mood, not yours or your staff’s. “It may sound pretty obvious, but you shouldn’t go into a restaurant hearing hip hop one night and jazz the next. As a consumer, I appreciate a consistent audio experience, just like the food. For restaurants in general, the idea is to manage those expectations.”

Music is a crucial part of that process, says Brittany Lyke, Social Media and Public Relations at Muzak (www.muzak.com), because it helps create an underlying impression and set the stage for the meal. “In a restaurant, the dining experience typically starts about a half hour before the customer starts eating so the music contributes to the feeling about the restaurant long before the food arrives.”

In a bar, of course, the customer is typically served much sooner and with the libations the main attraction, interest in food is often shifted to the back burner in favor of enjoying a fun, convivial setting. That usually calls for high energy, familiar music that emerges from the background to strike a more noticeable and often more personal note. 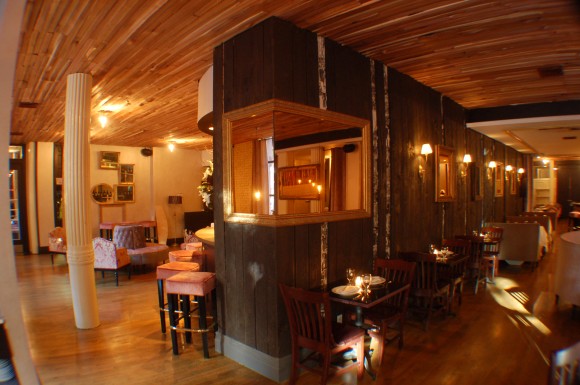 “A lot of people’s memories are associated with music,” says Partic Yumul, Vice President of Operations for the Michael Mina Group (www.michaelmina.net). “Songs people heard while they were growing up or a song they heard when they had their first kiss, and in some way we try to tap into that.” That can also encourage customers to stay longer, says Yumul. “If you’ve got the right music playing, people will sit at the bar and enjoy another cocktail or two. There’s an emotional response, whether it’s positive or negative, when you connect with music. And that turns into making a decision. Do I want another drink or do I want to get out of here? We push those responses.”

And who picks those tunes you hope might influence customers to stick around? In the bar and lounge at Daniel in New York, part of Daniel Boulud’s Dinex Group (danielnyc.com), it’s head bartender Xavier Herit, who first got involved in doing the music on New Year’s Eve, when he’d spin records for dancing after the live band stopped playing at midnight. “When we opened Daniel in 1998,” says Dinex Operations Director Michael Lawrence, “I was doing the music, which was mostly jazz. Now the music is kind of hip and loungy. Xavier has a great ear and puts together a great playlist, which he adjusts all the time. We’ve had tremendous success in our bar and lounge and I think the music and the ambience we set with it have made a big difference.”

Not all bars or restaurants are fortunate enough to have someone on staff who can blend a knowledge of music with what’s appropriate for the establishment. “Usually,” says Lori Hon of Gray V, “if employees are putting on their own music or what they personally like, you’re going to have a problem. It will be all over the place and not necessarily good for the restaurant.”

When it gets to the point where you are satisfied with your playlist, keep in mind that your sound system isn’t like one of those chicken rotisserie machines. You can’t just set it and forget it. “Volume level is really important,” says Nick Velardo, Director of Food and Beverage and Club Operations at The Breakers (www.thebreakers.com/restaurants_lounges/), which uses Muzak to curate the music at all its restaurants and bars at its Palm Beach resort. “The music should always be monitored and adjusted according to the buzz in the room, how many guests you have at any given time and the overall energy level.”

“We’ve all been in those restaurants, “adds Lori Hon of Gray V, “where the room gets louder and louder and the music finally gets drowned out. Then somebody turns up the music and everything escalates. Waiters have to talk louder and conversation gets louder at the tables. So keeping track of the sound should be a regular part of the staff’s duties.”

At a bar, you might turn the music up on purpose to drive up the energy. And as Hon points out, whether it’s a restaurant or a bar, you can help determine the type of customer you attract with the music you play. “It’s up to management to decide. If you’re getting a much older crowd or a younger crowd or a different crowd than you’re shooting for, then change the music accordingly.”

Next time, we’ll take a look at some of the legal and royalty fee issues surrounding bar and restaurant music.