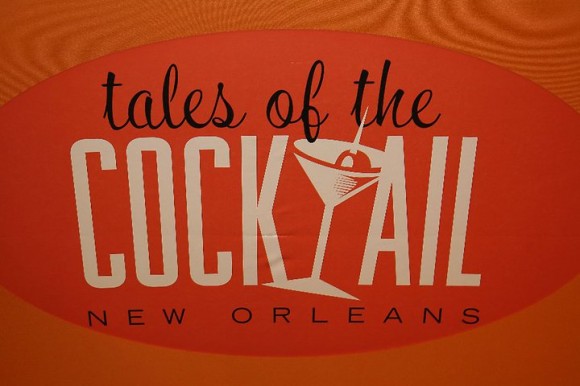 Tales of the Cocktail (www.talesofthecocktail.com) is well known for the constant imbibing that goes on (responsibly of course), but what about dining?  Contrary to popular belief, man doesn’t live on cocktails alone (though, talk to some of the bartenders there after three days and you’ll start to wonder when it was they had their last full meal).  And so, one of the favorite events of the week for many attendees is Thursday night, when all the spirited dinners take place.

Every dinner has its merits; this year one is being filmed, one is featuring white unaged spirits and liqueurs, and one may end in a fistfight.  Or so we’re hearing.  The battle royale?  It’ll be at GW Fins (www.gwfins.com) where things are heating up in the kitchen and in the dining room when East Coast and West Coast bartenders face off course after course with competing cocktails.

Kicking off the evening is a non-pugilistic approach as two left coast bartenders, Jackie Paterson and Anu Apte, are presenting their drinks.  Apte promises that the evening will start off right and anything heated that goes on this evening is not her fault.  She says, “When asked to do the aperitif round I looked for inspiration from my experience last year at Tales.  I attended the Tiki dinner that Martin Cate put on at GW Finns. (It was amazing!) I remember how hot, sweaty, sticky, and thirsty we all were as we arrived.  Out of sheer thirst and desire to keep our buzz going many us ordered drinks from the bar completely ignoring the fact that we had 6-8 cocktails ahead of us with dinner. Needless to say we all were smashed! One cocktail too many!

Keeping that in mind I wanted to create a cocktail that I could hand to guests as soon as they enter the restaurant.  Something light, bubbly and refreshing and also with low ABV.  I hope that feeling the cold glass, sipping a cold beverage through ice, inhaling the citrus oils and letting the bubbles tickle their noses will revive them.  The flavor profiles in Lillet (www.lillet.com), and the bitter notes of Gran Classico (www.granclassico.com) and Fever Tree’s (www.fever-tree.com) bitter lemon soda play well together. I hope enough to get people salivating and hungry for dinner.”

Chef Michael Nelson has been thinking about this dinner for a while; the request came in November for the restaurant to host it.  Quite the challenge to put together a menu that far in advance, particularly for one that updates its menu around the freshest catch of the day.  But Nelson, a veteran of the kitchen, and Nelson has the skill and expertise to put together plates that satisfy both bartender and non-bartender guests alike.  He notes, “I had to create this menu first, before the cocktails (were created) and so I created it with the thought that these dishes would be easy to pair with cocktails.  During the past several years, my experience has been that the bartenders either create a drink that is lighter and has fruit flavors, or a simple, stiff cocktail.   Each of the dishes on this menu has a sweet and sour aspect to them that works very well with either of these types of cocktails.  Examples of this are the tartness of grapefruit, acidity of tomatoes, and sweetness and spicy aspects of the Vietnamese Glaze on the Pork Belly.”  He continues, “I also felt that the bartenders would have a lot to work with playing against the different levels of fat content in each of the courses.”

There’s surely going to be some spirited play against the different levels of fat content in each course but what’s really promising to make this a rollicking evening is each of these bartenders chewing the fat (and spitting it out at their opponent).  After Anu and Jackie present their cocktails for the amuse, Richie Boccato and Jon Santer mix to the finish over a first course of Wood Grilled Octopus served with grapefruit, fennel, and avocado.  Battling over a second course entrée of Spicy Vietnamese Glazed Pork Belly that will be served with jicama relish and a cilantro coulis will be Jason Littrell and Dave Shenaut.  Next on the card are John Lermayer and Marcos Tello and who’s to say who makes the best cocktail to pair with Sumac Crusted Grouper accompanied by melted heirloom tomatoes, kalamata olives and pesto gnocchi.  The final match up places a sweet dessert course of warm roasted pineapple served with coconut sorbet between two sourly fierce competitors; Don Lee and Keith Waldbauer.

Who comes out on top?  It’s hard to say now.  But after a quick interview with some of those about to enter the ring our money might be on Dave Shenaut if we were the betting type.  Look at all this smack he’s talking:

INSIDE F&B: How would you describe your style?

DAVE SHENAUT: Powered by Carhart. Love to give people the knowledge they need to form a well rounded opinion about the drinking choices they make.

INSIDE F&B: Where are you from? How does that inform your creativity?

DAVE SHENAUT: A cul-de-sac just outside of Portland, Oregon— connecting the bridge and tunnel crowd with the hipsters and connoisseurs.

INSIDE F&b: What are the differences between East Coast and West Coast style in the bartender’s milieu?

DAVE SHENAUT: Style vs. Substance. East Coast has one or the other… West Coast has both. We get our hands dirty. We also give real service at the bar.

INSIDE F&B: What was the spark of inspiration that led you to your cocktail?

DAVE SHENAUT: Keeping Portland weird and putting a bird on it means that simple can be beautiful. Using West Coast sherry shows innovation and the respect to local.

INSIDE F&B: How do you plan on besting the competition? i.e., Do you have a secret weapon?

INSIDE F&B: Why will your drink work better with the food pairing?

INSIDE F&B: Would your competitor’s cocktail have a chance on your coast? If so, where would it feel most at home?

INSIDE F&B: Conversely, where would your drink be most at home on the other coast?

And, for your artsy side:

INSIDE F&B: If you were a movie, what movie would you be and what would your competitor be?

DAVE SHENAUT: I’d be “Casablanca.” Jason is “Adventures in Babysitting.”

INSIDE F&B: If your competitor were a drink that we’re being putting to rest at Tales, what would he be and why?

DAVE SHENAUT: Shirley Temple with Rose’s grenadine, with extra cherries.There you have it ladies and gentlemen.  If you’ve gotten your ticket already for this dinner then you’ll be fortunate to witness the battle royale.  If not, call the restaurant anyway (504-581-3467) and see if you can get on the waiting list; you don’t want to miss this one.

To hear Jason Littrell’s rebuttal, and get a sneak peak at what Keith Waldbauer has up his sleeve, check out the inside scoop www.cocktailbuzz.blogspot.com/2011/07/left-coast-vs-east-coast-libations.html that Steve Schul and Paul Zablocki have got for you on their site www.cocktailbuzz.com.

Meanwhile, sip on this: