Cocktails on tap take off
By Vincenza Di Maggio 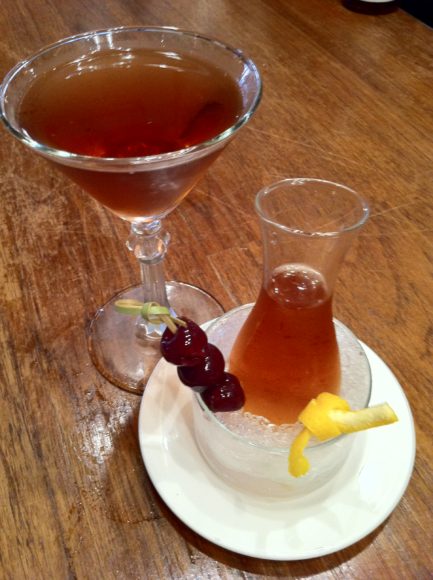 We thought we had seen it all when the wine-by-the-keg phenomena poured its way into bars across the country, but bartenders remind us that the wonders of the spirits industry never cease. From east coast to west, they are introducing customers to a new kind of drinking experience, ordering a straight-spirited cocktail on tap.

Kevin Diedrich, Bar Manager of the fairly new Jasper’s Corner Tap & Kitchen in San Francisco’s Serrano Hotel, which has only been open less then a year, says, “We’ve been doing this since we opened. People had already been doing Jameson, Vermouth, and wine on draft. It was something I wanted to do to separate us from everyone else who was already doing straight-spirit on draft. I thought, why not put a cocktail on draft?”

Diedrich instinctually took the concept behind wine on draft technology and applied it to putting a cocktail on tap. He hooked up one of the six taps on the back bar to an empty stainless steel Cornelius keg, commonly used by home brewers. Pressurized nitrogen, which does not carbonate the cocktail, is used to pump the beverage from the keg to the taps. If the cocktail requires carbonation, the nitrogen is substituted with carbon dioxide.

Since it’s opening last summer Jasper’s Corner has been offering customers the classic Negroni on draught. Diedrich takes the recipe for a single cocktail (1oz. gin, 1oz. Campari, 1oz. sweet vermouth) and translates it directly into a large format batch (4 liters of gin, 4 liters of Campari, and 4 liters of sweet vermouth.) Diedrich purposely chose a straight-spirited cocktail that isn’t comprised of sugars or syrups for two reasons, “A straight-spirited cocktail will not separate, but if the mixture includes syrup then the sugar will eventually sink to the bottom. The consistency of the cocktail is completely different and the keg will have to be shaken or stirred.” Secondly, he adds, “I’m filling up the keg weekly, but the shelf-life is going to be forever because one, it’s sealed, and two, it’s straight spirits so there’s nothing in there that’s going to spoil, like citrus and sugar.”

Practicality isn’t the only reason behind his choice of cocktail. Diedrich shares that there is something alluring about the Negroni being an “industry-driven drink.” He says, “It’s an acquired taste that takes a little time for the novice to get used to. People who order the Negroni, know the Negroni.” In keeping with that insider practice, Jasper’s Corner has very recently introduced a second classic cocktail to its bar taps, the Hanky Panky (gin, sweet vermouth, and Fernet Branca) – not that you would know it by looking at the drink menu! Diedrich explains, “We like it being this underground you-need-to-know kind of thing. There isn’t a giant handle on the back bar that says Hanky Panky or Negroni. It’s kind of a cultish following that everyone knows about.” (www.serranohotel.com/san-francisco-restaurant/index.html)

As far as Diedrich knows, Jasper’s Corner is the first, and currently the only bar in San Francisco serving cocktails on tap, but the trend is also catching fire in New York City as well. At Saxon + Parole, the newly opened NoHo restaurant and bar named after two nineteenth-century racehorses, customers can order a Manhattan on draught. Unlike Jasper’s Corner, at Saxon + Parole (www.saxonandparole.com) the Manhattan on tap is listed first, taking center stage on the cocktail menu. “The Manhattan is just such an iconic drink for this city that it’s a drink people can relate to,” says Bar Manager Naren Young. He continues, “I’m not going to lie, ideally it’s just cool, but there are also some benefits that come with [putting a cocktail on tap]. We measure it out before hand and every drink comes out the same. All you have to do is pull the lever. It comes out cold so we don’t have to stir it too long and it doesn’t dilute. It’s just much faster.”

At Saxon + Parole customers who order a Manhattan on tap are charged $15, the same price as a cocktail that has been prepared regularly, and they have no reason to question it. The cocktail is sophisticatedly served in a small martini glass accompanied by a miniature chalice which holds the surplus of the drink and rests over a bed of crushed ice – which the bartender chips on site from a large block of ice sitting behind the bar. A lemon peel and three skewered cherries elegantly complement the cocktail. As you sip the classic cocktail and savor the notes of Parole Whiskey, Saxon + Parole’s own house brand of whiskey, you will easily believe Young when he confirms, “The response is incredible, it’s our biggest selling cocktail.”

It’s not just the novelty that makes these cocktails sell well on both coasts. As far as taste is concerned in the case of the Negroni, Hanky Panky, and Manhattan on draught, both Diedrich and Young have verified that one wouldn’t be able to tell the difference between a cocktail that was stirred together on the spot and one that was poured from the tap.

At New York City’s newly opened (March 2011) Amor Y Amargo (www.amoryamargo.com), however, this is not the case. New York’s first and largely successful bitter’s tasting bar offers the Americano on tap; a combination of their house made sweet vermouth, Campari and water that is then force carbonated (carbon dioxide is used to force carbonate the keg instead of nitrogen).

Avery Glasser, co-founder of Bitterman’s Inc., and owner of Amor Y Amargo, shares where his inspiration for putting a cocktail on tap came from, “Mayur Subbarao, at that time the beverage director for Cienfuegos and El Cobre (now closed), was a good friend and had been at the forefront of draught cocktails. At El Cobre, he had had a Cuba Libre and a Dark and Stormy on tap since he opened the bar. When he and I were thinking about what we were going to do at Amor y Amargo, we knew that we wanted to have one kegged cocktail and sweet vermouth on draught.”

They decided on the classic Americano, but this time there is a noticeable difference in taste between a cocktail poured from the tap compared to one prepared by hand, in a good way! Glasser explains “In our case, the effervescence is distinct when the whole beverage is carbonated versus a drink where you’re adding soda water simply to spirits/modifiers. For the Americano in particular, the benefit is that we can adjust the carbonation of the final drink, giving it a consistent effervescence that you can’t get by mixing vermouth and Campari with soda water.”

At Amor Y Amargo the Americano is priced a little cheaper then a standard cocktail. Glasser clarifies, “That is less because it is less labor intensive to serve a draught cocktail and more because we want to encourage people to drink bitter cocktails (the whole purpose of Amor y Amargo is to help people learn about bitterness as it pertains to cocktails) and it is a good introduction.”

The Americano on tap has proven to be a great hit at Amor Y Amargo. Glasser says, “It has become a draw for customers, with many saying it’s been the best that they’ve ever had. We have never had a request for someone to make an Americano by hand versus having it on tap. “

Serving cocktails on tap is a trend that is picking up speed. Not only is it innovative but it also comes with a lot of benefits. Young notes, “It’s such a smart thing to do. It’s fast, it comes out cold, and it’s consistent.”

Some have expressed concern that putting a cocktail on tap might take away from the ritual of bartending and it might diminish the value of the art and science that is implemented by a bar tender when mixing a drink. Diedrich jokes, “People make fun of me and say that I’ve become lazy, but we still pump 300 cocktails out a night outside of the Negroni. It saves money because you don’t have to worry about over pouring, or the cocktail coming out different every single time because it’s the exact recipe that’s being pulled off of the draft handle. It’s a great way to get someone to drink fast and efficiently and bounce!”

The refreshingly new trend of serving cocktails on tap is growing increasingly popular and has been well received by customers on both the east and west coasts. Glasser concludes, “Like most trends, it will go in phases. It will grow for a while and be used for many cocktails where it just isn’t needed, then the novelty will wear off, and then people will use it where the process of having it on tap actually adds something to the end product.”

HELPING ONE OF YOUR OWN – FOR LYDIA TILLMAN