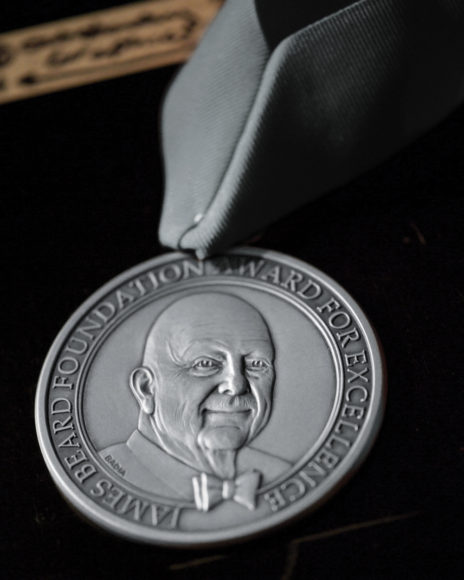 She continues, “We are really excited about the fact that we’re playing up James Beard’s role in the development of the food world. How prescient he was – cooking in season, using food and American wines in menus well before there were words like food miles and the farm to table movement started.”

The way that winning a Beard Award moves someone’s career forward is astounding. The visibility quotient and name recognition hits an all-time high when a chef or restaurateur or designer or architect is associated with a Beard nomination. Ungaro confirms, “There’s no doubt that winning the James Beard award for someone in the chef/restaurant world is a catapult into success. We hear from the winners that as soon as nominations are announced reservations pick up and I’ve not got any doubt it’s a career enhancer.”

What are also enhanced this year are the award categories themselves; for the first time ever the Foundation is introducing a category that spotlights beverage programs. The Outstanding Bar Program, presented by Campari, recognizes a restaurant or bar that has demonstrated excellence in its spirits, cocktails, wine and beer service. The first round of nominees are: The Aviary (Chicago), Bar Agricole (San Francisco), Pegu Club (New York), PDT (New York) and The Violet Hour (Chicago).

This is an impressive list of nominees, each a stellar example of excellence in their field that takes in more than just good drink making and wine and beer list curation; it’s about extending a measure of hospitality that resonates. Jason Daniel, Campari Brand Director, Campari America comments, “Campari, a bartender’s brand for more than 150 years, is proud to honor these five nominees that represent the present and exciting future of bar programs across the country. Their commitment to their craft is an inspiration to us and is a level of achievement for all bars and restaurants to emulate.”

Nominee Audrey Saunders of the Pegu Club (NYC) has plenty of people emulating her style and takes a moment to share the genesis of her success as she says, “When I began my work with Dale DeGroff in the 1990s, we had a collective vision in which the craft cocktail would gain acceptance as a true, culinary endeavor. We hoped that each progressive sip by a guest would not only be enlightening, but also truly inspire them to appreciate a well-crafted cocktail as they would a fine-dining experience,” said Audrey Saunders of Pegu Club. “I am deeply honored to have the Pegu Club nominated for this ground-breaking James Beard Award. Back then, I had always dreamed of a cocktail revolution, but never imagined that it would ever take place, much less become reality at today’s scale. In 2012, I see the Award itself not only as recognition of those who aspire to excellence, but equally important, as an acknowledgement of those establishments who both dare to dream and stand firm in their convictions.”

Jason Cott, of The Violet Hour, firmly insists on acknowledging the importance of those who toiled before him as he explains the impact this new award has on his business. He notes, “We’re standing on the shoulders of the bartenders and mixologists who revived the craft of the cocktail to its former glory, often without the recognition they deserved. Without their hard work, passion and ingenuity, we wouldn’t be here today. We share this honor with our colleagues and mentors.”

Jim Meehan, like Saunders, is a mentor to many. And his bar, PDT, is one of the penultimate quaffing experiences. It got that way, and reached a point where it’s on the short list the first time this award is presented, because he’s got perspective. Meehan says, “Coming originally from the restaurant world, it’s a huge honor to be recognized by such a prestigious culinary organization as the James Beard Foundation. The cocktail world has drawn inspiration from chefs and great restaurants. Hopefully, this is a turning point not only in cocktail history, but in culinary history as well. It’s a thrill to be nominated.”

The nomination may be simply bestowed upon a select few, but it’s the entire industry that celebrates its success with new awards like this one. Thad Vogler of Bar Agricole concludes, “As bartenders, we’re honored the Beard Foundation is including us along with so many great food and wine professionals. We think it’s indicative of a change. People appreciate when the same thoughtfulness goes into a beverage program as a food menu or wine list. What a privilege to be a part of such a great event!”

If you’re fortunate enough, you’ll be part of this great event yourself on May 7th and there in the audience, cheering on your favorite nominees and celebrating with them afterwards. If not, then sit back, check out this impressive list of nominees, and get your score card ready. www.jamesbeard.org/awards/2012-jbf-award-nominees

For more information on the James Beard Foundation, go to www.jamesbeard.org